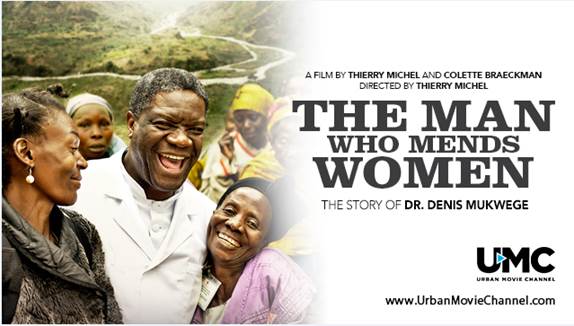 The Man Who Mends Women on UMC (Urban Movie Channel) highlights the work of Dr. Denis Mukwege, the Congolese gynecologist who runs the Panzi Hospital in the Democratic Republic of Congo and has been committed to helping the many women who have been brutally raped in the midst of the 20 year conflict that affects the area.

Please see the trailer for the film here: https://urbanmoviechannel.com/film/man-mends-women/. The full press release is included below and also references other titles new to UMC this month, including Season 1 of the Braxton Family Values.

A sensitive yet impactful film that sheds light on the atrocities committed against women throughout the long-running conflicts in the Democratic Republic of Congo, The Man Who Mends Women premieres exclusively on UMC on Friday, May 19, 2017. The documentary tells the story of Doctor Mukwege, internationally known as the man who mends thousands of women who have been raped during the 20 years of conflicts in the East of the Democratic Republic of the Congo. His endless struggle to put an end to these atrocities and denounce the impunity enjoyed by the perpetrators is not welcome and at the end of 2012, the Doctor was the target of an attempt on his life – which he miraculously survived. Threatened with death, Dr. Mukwege now lives cloistered in his hospital in Bukavu under the protection of the United Nation peacekeepers. No longer alone in his struggle, the women to whom he has restored physical integrity and dignity stand beside him as true activists for peace, hungry for justice. Available at www.umc.tv, UMC is the first premium subscription streaming service that showcases quality African American and urban entertainment across all genres from RLJ Entertainment (NASDAQ: RLJE).

On Friday, May 26, 2017, UMC presents the new military drama, Stand Down Soldier. After Sergeant Stacy Armstrong (Jeryl Prescott, The Walking Dead, The Birth of a Nation) returns from three deployments with PTSD, she and her husband Jesse are determined to save their twenty-year marriage from being another casualty of war. Infidelity, addiction, and a tragic accident test the couple’s commitment as Jesse struggles to keep Stacy and their marriage alive. The film, which was also written and directed by lead actress Jeryl Prescott, is an exploration of life after military service that highlights issues returning soldiers face in their civil lives such as mental health issues, loneliness, and drug addiction. “UMC provides a great service to the community and to filmmakers through its offering of meaningful, quality entertainment” said Diarah N’Daw-Spech of ArtMattan Films, the licensing company behind acquisitions of The Man Who Mends Women and Stand Down Soldier. “We are delighted that two films we have fought for have been embraced by UMC.  Both are rare films about very important subjects and we think that UMC is the perfect home for them.”

Also coming to UMC in May, as Season 6 of WE tv’s Braxton Family Values comes to a finale, UMC is just getting started! See where it all began with Season 1 as we kick off #BFVonUMC  and take fans for a trip down memory lane. Beginning on Thursday, May 25, 2017, UMC will add a throwback episode from Season 1 of Braxton Family Values, each and every week through July 27. Loyal viewers can look forward to reliving some of their favorite moments of the show while new audiences can experience it all for the first time from the very beginning.

Currently available on UMC after premiering earlier this month, The Fix follows Abigail (Meta Golding, The Hunger Games: Mockingjay – Part 2), a struggling waitress straddling the edge of drug addiction. In the midst of her downward spiral, she witnesses the shooting of an unarmed teen by an LAPD officer with whom she’s been having an affair. When the daughter she gave up at birth reappears, Abigail is forced to reevaluate her life and the decisions she’s made along the way. Writter and directed by Paris Bauldwin, the film also stars Eric Roberts (Grey’s Anatomy, Lost Girl, Suits), Timon Kyle Durrett (Queen Sugar), Sean O’ Bryan (Person’s Unknown, The Middle), Asia Queen, Blaine Gray, Nicole Steinwedell, and Jeremy Luke.