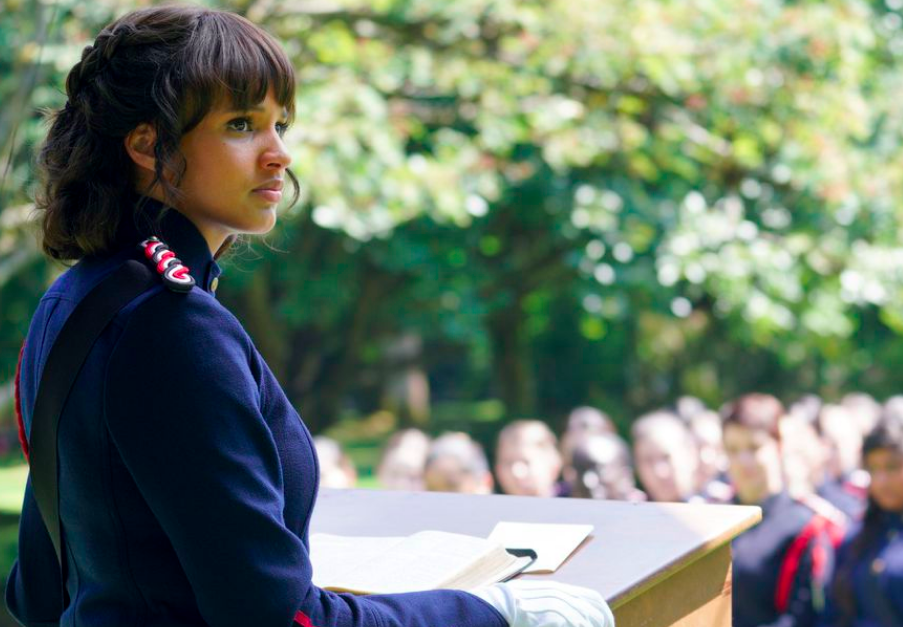 I had the awesome opportunity to speak with one of the lead witches in training — Abigail, played by the stunning Ashley Nicole Williams. This truly female-powered series answers a lot of questions about feminism and what it means to live it and act it. Ashley had intriguing insight, at just 21, on what it means to have Black girl representation on screen, in such a headstrong and matriarchal position, that takes clear advantage over a condemning patriarchal system.

Motherland: Fort Salem is nothing like the other witch series we have seen thus far. Why is that?

We’re reimagining the witch, and bringing the witch about in a different way, which is cool.

Not all actors and actresses like to watch their own shows along with the rest of the world. Do you and the other cast members watch?

I have seen a total of six out of the ten episodes, but I do watch every week with the East Coast audience. I’m in Texas right now. I live tweet at the same time with the show. Actually, the cast all live tweets during the episode, which is wild and fun at the same time. You get to see what everyone’s saying about it, but it’s also like, you can’t look at the screen to watch and type at the same time. It’s hectic. But yes, I do watch along.

This series is extremely physically demanding of its cast members. It’s not all magic tricks with smoke and mirrors. How much work do you have to put in for Abigail?

All of our stunts and fight scenes we do ourselves. With the rope dart that you see in the first episode specifically — and it’s trickled throughout the series — we had to train for the first three weeks that we got there in April. Then we started filming. We have stunt people there, and they’ll do the wide shot. [In Episode 5: “Bellweather Season”], I did all of that. I rarely use my stunt double, because I did everything. We were definitely treated like real stunt women. I’d say that my character Abigail has the most fight scenes out of everyone. The other girls have had at least one, and I have like three or four throughout the series. So I was really out there. I felt like a true stunt person. It was cool, because I had never done something like that before. Of course, I’ve done sports, but stunting is totally different.

Aside from physically fighting, Motherland is also fighting another battle for women to be treated as equals. So naturally, in a lot of reviews the word “feminist” comes up. Do you consider yourself a feminist?

Oh, that’s a really good question. I’ve never put my name to the word before. I say, I definitely, want to consider myself as someone who fights for women’s rights and always takes the side of a woman. I’ve never thought about it like that. I don’t know. If I am, I think most women are feminists without saying they are. So yes is the answer.

Especially your character, Abigail. She embodies a lot of feminist traits, the way that she’s so bold and assertive.

Oh, 1,000%. She is totally in control of herself, and that’s something I think our show really tries to project to our female audiences. You can be in charge and have power and have a voice, and who cares what anyone else says? And Abigail completely embodies all of that.

This take on a female-centered supernatural theory, instead of being counterproductive, actually turns the gaze back on the matriarchy. So, with Black women and women in general, having always been condemned for their strength, Abigail and her family are the epitome of what it means to be in control of womanhood. When you were going for this role, did you know that you’d be depicting such an important character?

1,000%. I was so in awe that [out of the three leads] in our unit, one of them was a Black woman. I took that so seriously. Just looking at it, I thought of those stories like, “Oh, I wish I saw someone like me on television or a superhero like me.” Not that I’m a superhero or anything, but I know that young Black girls are potentially looking up to me. So I took that very, very seriously. How I went about the character was to bring authentic things to her, to Abigail. We’re very, very similar, so I brought myself to the character and I remain true to that. This was something that I did, because I knew I had a huge responsibility. Just like Taraji P. Henson has, or Viola Davis, or Kerry Washington, people that I look up to. I know that started that for me, which is so unreal because I’m only 21.

Are these kinds of roles something you look for when considering a part?

I definitely look at every role that I go for. My agents and managers will send me the material and they always ask, “Do you respond to it well?” If I don’t feel in my soul that it makes a difference — because I feel like you always want to be in media that makes a difference. You don’t just want to do things just for sh*ts and giggles, pardon my French. But no, you wanna do something that has an impact, or at least I do. Something that moves the needle. So, yeah, I always look at that. I felt so honored to be chosen to be in this series because there’s such a heavy focus on women empowerment. Like I said, our main takeaway that we want our audience members to know is that you do have a voice, and you can be in charge and run things. It doesn’t matter about men, it doesn’t matter about anyone else who has something to say about it, because that’s who you are.”

A lot of times people don’t really look at the media as what’s producing social change. But Motherland: Fort Salem is one of the very few shows that’s actually attempting to deconstruct social constructs. It’s a rare and very important thing. Have you thought much on being a deconstructing factor in the media rather than a reflecting factor, as so many television shows are today?

I think it’s so freakin’ cool that we’re flipping the narrative, changing it and knocking down social norms. I feel like it’s kind of a responsibility of ours. Now. Let’s say we go for seasons and seasons. We can’t just stick to the witchery or go down a different path because we are addressing all of these gender role reversals. I know for my character, she’s the female version of toxic masculinity at the beginning. So Motherland has a responsibility to stay true to breaking down those walls and opening doors for everyone in their audience, so they know that they can relate to that person. They’ve never seen that type of person on TV before. So yes, I think it’s great to be a part of this.

What do you say to the naysayers who disagree with the message that Motherland is trying to convey?

I think the people who are saying [they don’t agree with Motherland’s message] are the same people in the bubble that we’re talking about — the people who believe women are just housewives or should only be taking care of the baby, therefore they can’t be in charge and run things. While [in the show], the men are the ones taking care of the kids and making our weapons. I just think that [the naysayers are] not ready to accept that things can be flipped upside down. That’s the whole point of why we made this show. It’s time to accept these different things and to know that it’s okay and that it’s going to happen regardless. Women are gonna run stuff, and it’s time for people to accept that. I think that’s the whole reason we’re making this show is for those people who don’t get it, so they can see that. They can be closeminded if they want to be, but sooner or later, it’s going to be all around them.

Tonight’s episode is just one week shy of the season finale. Meaning, it’s not too late to binge the season and tune in with the cast on Twitter! This is a series you don’t want to be caught sleeping on.