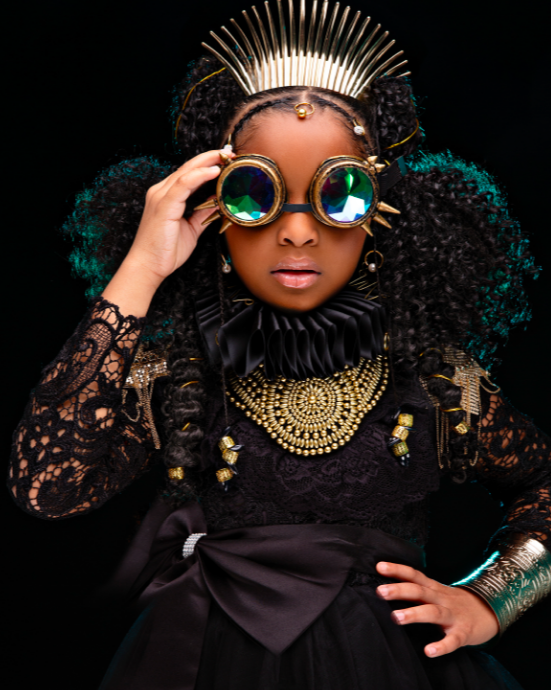 From the beauty standards that sought to perm our edges to the first person that ever told us that our wild hair, our melanated skin, and our boundless exuberant dreams were too big, too ambitious, and too daring, one thing is for sure: they were wrong.

Black beauty has been historically belittled, commodified, and appropriated. The celebrations of our natural features have often become co-opted and boxed in, made to fit into false conceptualizations of pop culture.

However, one phenomenal couple used their incredible talents to challenge the world’s depictions of Blackness and beauty, and the result is unlike anything that anyone has ever seen.

Glory: Magical Visions of Black Beauty by married couple Kahran and Regis Bethencourt, is a breathtaking photo book that was published on October 20.

The couple founded CreativeSoul Photography in Atlanta, Georgia, and are on a continual mission to use their studio to capture under-celebrated beauty.

With celebrities like Taraji P. Henson, Will and Jada Pinkett Smith, Common, Alicia Keys, and Tyra Banks praising their work, the couple has been able to spread the message behind their photo book, which is a celebration of Black beauty’s past, present, and future.

The photo book also includes background on the Bethencourts and a powerful forward written by actor Amanda Seales, who stars on HBO’s Insecure, a fan of their work.

In her forward, Seales writes:

“To be young and Black in this world can be a dangerous burden of the pressures of having to pursue perfection and duel with discrimination, but in the work of the AfroArt series, we see the embodiment of self-love displayed in portraits of pride and power that lift not only our spirits, but our community, reminding us of boundless possibilities.”

Seales couldn’t be more correct in her statement, as the Bethencourts inspire so much imagination and vision as they allow us to embark on a stunning journey through AfroArt that connects us to our firmly planted roots in Africa and the bright and rising sun of our Afrofuturity.

BGN was given the honor of speaking with Kahran about the photo book, and it was truly a treat to hear more about the story behind the photos.

Kahran gave us some insight into how this work of art and ancestry came into being.

What inspired you and Regis to start Creative Soul Photography?

My husband went to school for photography, and I started learning along with him while he was in school. We were both interested in photography and were working as graphic designers before.

So, we decided that it would be cool to really be able to capture and create our own photographs. We knew that we love portraiture and taking photos of people. In the beginning, we were doing a little bit of everything.

We were shooting families and weddings and babies and kids and pretty much anything that people would pay us for. Then, I was still working full time. We came to the point where we said, you know, why are we going to build a business that we hate?

So, we started getting rid of some of the things that we didn’t like to do. We started focusing on kids because we knew that we really loved working with kids and we were always pulling the kids to the side and doing creative things with them.

I think it was really around 2013 when our business really took off. We started up in 2009, but 2013 is really where we started to focus on kids.

What inspired you both to create Glory?

When started photographing kids, we got into the kid’s fashion industry, and when we got there, we realized, it wasn’t very diverse.

A lot of the kids with natural hair would come to get their headshots, and they would have their hair straightened because their parents thought that’s what they had to do to get their kid into the industry.

So, we were like, wow, that’s really sad, we’re teaching kids at an early age that their hair is not acceptable.

That’s when we started a couple of personal projects to focus on kids with natural hair. That really took off for us. Around 2017, 2018 was when we started the AfroArt series — a celebration of the beauty and versatility of Afro hair. But we wanted to do it in a really cool and unique way. We did these stylized studio portraits of kids, and we would do different themes.

So, that really was the inspiration behind Glory. We wanted to take our AfroArt series and put it in print form and still stay true to what we were doing. We wanted to highlight stories behind some of the photographs of the kids we were shooting.

What did it feel like to connect with Amanda Seales to write the foreword?

Oh, my gosh. I was actually so excited but super surprised as well. We knew that she had posted on a few of our posts, and I knew that she followed us.

I knew that she had had her own journey with natural hair, and I took the leap and slid into her DMs and asked if she would be willing to write the foreword.

She replied right away and said yes, definitely, and she would love to be part of something like this. So, I was super, super surprised.

We love the foreword that she wrote — it’s so relevant. It feels like she knew exactly what we were aiming for and what we were trying to do with this project.

How did you connect with such a diverse group of people to photograph?

We were really lucky. A few years ago, we actually did something that we call our world tour, even though it wasn’t completely around the world. But we did go to eight countries in about 35 days.

So, that made it a bit easier for us when we did the Glory book because we already had some connections in those different locations.

We were able to connect with existing contacts that we had, then also we had started to develop a base at some of those locations. We were able to do captain calls and other things. It just made it a lot easier that we had already done our world tour in 2016. That set us up for success with the Glory book.

2016 was when I left my full-time job because it just felt like our dreams were bigger than just the United States. I knew that we were not going to be able to do that in 15 vacation days.

Why was it important to feature images of Black children from all over the world?

It’s so important for me to not only picture kids from around the world, but also have a wide variety of children. I wanted [for kids a book that] no matter what their background was, whether they’re rich or poor, or whether they have high self-esteem or low self-esteem, I wanted them to be able to see themselves in this book and see themselves reflected in some way.

We have athletes, we have neuroscience expert, we have a drummer, a 10-year-old DJ in Ghana, and we have kids who cannot afford to go to school.

I wanted to have that mix of a spectrum of kids across the African diaspora so that, you know, when kids look at this book, they would be able to see themselves in the book some type of way.

In addition to the visually stunning photos, the Bethencourts include quotations from a variety of influential people, like Nelson Mandela, Oprah Winfrey, Susan L. Taylor, and others, as well as many proverbs from different countries in Africa.