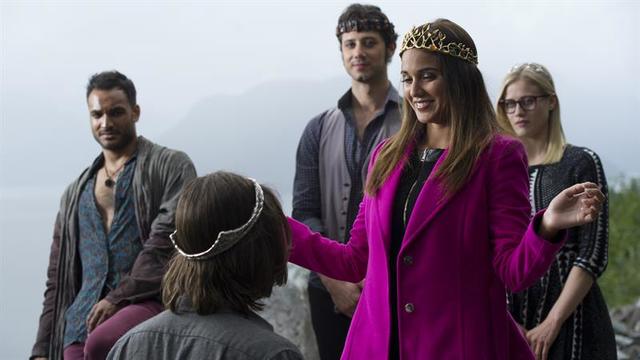 Whew! At the end of last season of The Magicians, things were looking pretty grim at Brakebills. Everyone was dead. Well, everyone except for Quentin, Julia, and Penny. But, Penny was missing his hands – well they weren’t actually missing. They were nearby. Just not attached to his body.

So yeah, things were looking pretty grim at Brakebills.

Season 2 starts with Quentin running through the forest of Fillory screaming for help for his friends. He encounters a lovely little cottage with candy accents and asks the woman inside for help. He gives the woman his blood in payment for her assistance, but not before Alice bursts through the door to the forest, closely followed by Margot, Eliot, and Penny (who’s hands are in a box). We learn that the *ahem* beverage that Alice drank at the end of Season 1 gave her god power, which means she can’t be killed. It also means she’s able to bring others back to life.

Quentin asks for his blood back, but the woman refuses and warns him that the creatures in Fillory may look whimsical and fanciful even when they’re not. I’m making a note of that exchange right now. I’m sure it’s going to come back to haunt Quentin and the rest of the crew later.

They head back to Brakebills only to discover that the WellSpring has been drained quite a bit. They can’t seem to catch a break so they do what any group of overly intellectualized students might do in this situation – turn to books for the answers. It’s cool seeing them be so unabashedly nerdy with only a touch of pretense.

Once the books give them a plan, they head off to execute it. I agree with their decision to get those Fillory crowns first and look forward to what will happen in the process. I’m intrigued by talk of the rainbow bridge.

Meanwhile, we see Julia and the Beast working together to find the god that took advantage of her and killed her friends. Their tenuous partnership is presented like a good guy/bad guy pairing, but I think it’ll have disastrous consequences.

Penny and Margot head off to the healing river to fix his hands in the healing waters. I hope Penny becomes less of a jerk this season. I don’t expect him to become soft and gentle, but I would think that he’s learned from last season. It seems that he hasn’t, and now he’ll pay for it. At least he has his hands back.

By the way, the rainbow bridge is trippy and beautiful. I hope they get to go back to it again later. 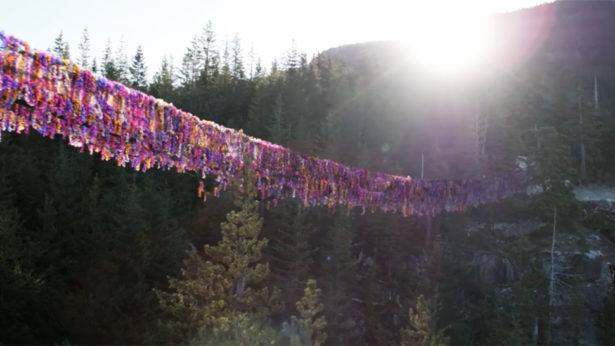 The storylines in The Magicians usually involve things that are both fantastic and ridiculous, so of course, they find that the Knight of Crowns has died waiting for them to get the crowns. Alas, death is but a deeper sleep in Fillory, and he “awakens” when they arrive. But before they can receive the crowns, they must pass a test. The test involves answering questions about entertainment facts from the 90’s because the Knight thinks it’s still the 90’s on earth.

Eliot acts out a scene – no, wait – the scene from Dirty Dancing where Johnny (Patrick Swayze) returns to Kellerman Resort’s end of the summer dance to get Baby (Jennifer Grey) and perform the last dance with her. He’s awarded the crowns. Eliot, Quentin, Margot, and Alice are all crowned.

It’s good to see the whole crowning process take place, but it’s tough to know what that means in Fillory. It will probably be unlike anything we’ve seen so far, which could be good or bad. We’ll have to wait and see.

It’s nice seeing Alice begin to step into her abilities. It looks like her power goes well beyond her ability to bend light. She’s able to successfully turn a seed into a tree that’s bearing fruit.

So the Beast and Julia are bonding over their mutual mistreatment, abuse, and rape? He tells her to simply get over it. This feels very much like mansplaining to me, but I digress. He tells her to get rid of “the Shade” inside of her that makes her feel bad about being raped. Umm… this feels problematic on a cellular level largely because the Beast still harbors the pain of his rape. He’s told himself that he doesn’t, but his actions say otherwise. It’s also insensitive to anyone who’s experienced a horror like rape. It feels dismissive.

So we’re at the end of a confusingly clarifying first episode of The Magicians. Questions were answered like:

At the same time, other questions were raised like:

So there’s a lot to be addressed in this coming season. I’m excited to see how it all turns out and what new questions will be developed along the way.