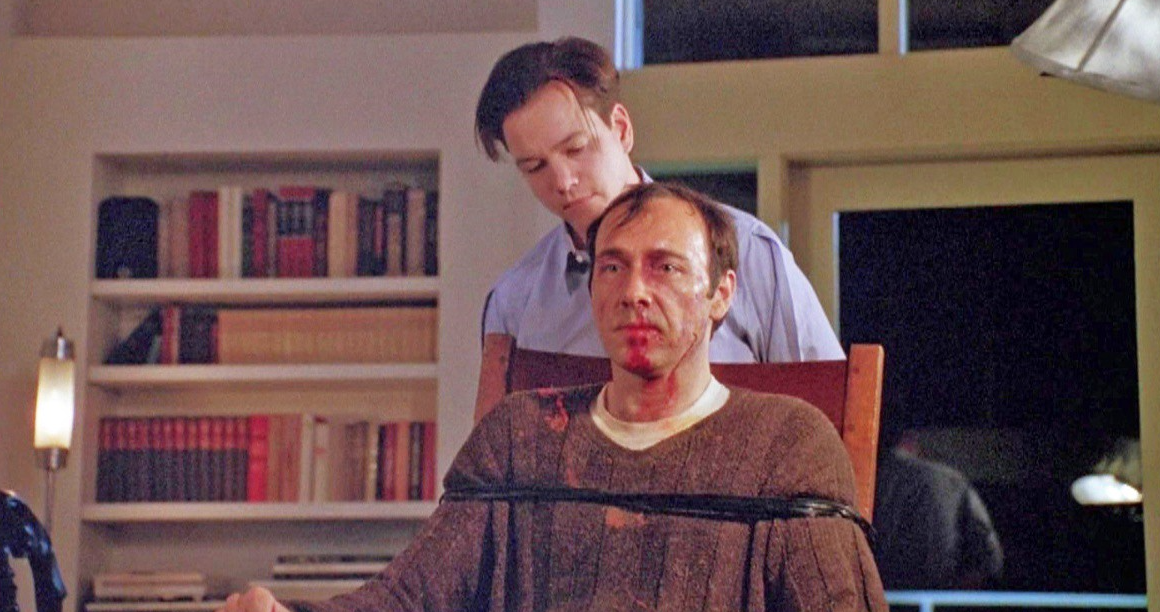 Nowadays, when we think of abusive bosses, we always think of that movie about Vogue editor Anna Wintour. However, before The Devil Wears Prada’s Miranda Priestly, there was Buddy Ackerman. The job thousands of assistants would kill for was working for Hollywood studio executive Buddy Ackerman. This job came with a price, though — verbal abuse, gaslighting, and sadistic treatment in exchange for a future opportunity to work as an executive in Tinseltown.

Before we dive into reviewing the 1994 dark psychological comedy-drama Swimming with Sharks, this Friday April 15th, the series premiere of Roku’s Swimming with Sharks makes its debut. Based on this film’s template with women leading the cast, the show takes an even darker turn than the original film did.  The series stars Diane Kruger and Kiernan Shipka and was created by Kathleen Robertson. There are some creative differences between the two stories but the basis of the assistant taking vengeance on her boss parallels the original concept of the 1994 version.

In Huang’s film, the story is set in the present day with Guy (Frank Whaley) standing outside of what appears to be a quiet suburban neighborhood with a bewildered expression on his face. In the background, a body bag on a stretcher is carried out by coroners and loaded into a van. A haunting music score lingers as the camera pushes in on Guy’s face. The sorrowful melody is prominent in the film, and sets the tone for this story of dejection and vengeance. We already know at this point less than five minutes into the film someone has died and the narrative goes back to flashbacks to fill in the gaps and deliver its expository storytelling. Swimming with Sharks meanders back and forth through the past of Guy’s time working as an assistant for Buddy Ackerman, which sets off the chain of events for this movie’s plot to the movie’s ending — murder.

Guy’s first day of training after getting shown the ropes by Rex (Benicio Del Toro), Buddy’s assistant who was recently promoted to VP of Production at Paramount, is already a disaster. Buddy demands Sweet’N Low with his coffee. As Guy frantically runs to the breakroom to find Sweet’N Low, there are no packets left to be found. He sees Equal instead, grabs a few packs and runs back with the coffee to serve to Buddy. Buddy is annoyed since this is obviously not what he asked for. However, when Guy explains to Buddy that both Sweet’N Low and Equal share the same ingredients, this retort infuriates Buddy. He gives an abusive lecture by saying: “Shut up. Listen. And learn.” For Buddy, it’s all about paying attention to detail and being competent in that area.

As Buddy leaves, Rex coaches Guy and tells him that he can’t win with Buddy. Tomorrow he’ll ask for Equal instead. This scene not only introduces us to the barbarous nature of Buddy’s personality, but it beautifully illustrates the kind of person Guy is in comparison to his predecessor Rex. While Rex is complacent with Buddy’s belittling and viciousness, Guy is inquisitive and doesn’t understand why Buddy reacts the way he does. In fact, Rex himself has to give Guy a lecture of his own about working in the film industry. What they do there isn’t “business” — it’s “show business.”

Swimming with Sharks, although it is peak ’90s in terms of some scripted dialog on outdated movie references about Shelly Winters and has some super choppy editing, is a fantastic movie to watch. And even though Kevin Spacey is now a name riddled with sexual abuse allegations, he was in his prime in 1994 and one of the most popular actors in Hollywood. After giving this movie another watch in 2022 through a #MeToo lens, there are some scenes with Spacey when he’s referring to women that are cringeworthy. Of course, this is Buddy here, not Spacey, but to blur the lines together is easy to do. Buddy is a womanizer and also a misogynist. He insists on only working with male directors and uses women ovulating as an excuse not to work with them.

Frank Whaley, who was incredible as Rafael Scarfe in Marvel’s Luke Cage, delivers a remarkable performance as Guy. The actors have electric chemistry, and their scenes together are always fascinating to watch. Guy meets a film producer named Dawn (Michelle Forbes) one day when he accidentally parks in her spot. Dawn becomes a romantic interest for Guy but also serves a wedge between Guy and Buddy as the story progresses. Forbes was one of the few actors I’ve always enjoyed watching in the ’90s who always had this impenetrable air of confidence with every character she played. Dawn Lockhart in Swimming with Sharks is no different.

George Huang, who also wrote the script, does a phenomenal job of creating great character development between Buddy, Guy, and Dawn. We learn their motives, and they are fully fleshed out three-dimensional characters. And the film sets you up to think that every character is who they say they are, only to have it turn out that they are completely different. They’re the exact opposite of what we thought during this 1 hour and 33-minute ride. We’re completely duped at the end. You’re left feeling betrayed or angry that you were rooting for the wrong character the whole time. It’s clever storytelling that unfortunately, I don’t see happening anymore with the crop of films that are produced today.

The film also reflected on the ugliness of Hollywood and its treatment of women. As pompous and awful as Buddy Ackerman was, his fictional character wasn’t too far from real-life Hollywood types like Harvey Weinstein.

In an interview Huang did in 2021 to discuss the Blu-Ray release, he says, “I’m holding up a mirror to the way Hollywood treats women. I don’t endorse this, I’m not saying this is the way we should continue, but hopefully, it’s a way to start the conversation and something that everyone can use as a starting-off point to fix things.”

There are some awful truths to the Buddy Ackermans of the world even if this story is steeped in fiction.  Roku’s female version will offer an interesting perspective as well since women executives are not exempt from their own abuse of power.

You can stream 1994’s Swimming With Sharks free on Tubi and the 2022 version Friday April 15th on Roku.

Review: Roku Channel’s Original Series ‘Swimming with Sharks’ Is a Dark Tale of Power and Obsession in Tinseltown

‘Swimming With Sharks’ Unpacks the Manipulation of the Hollywood System