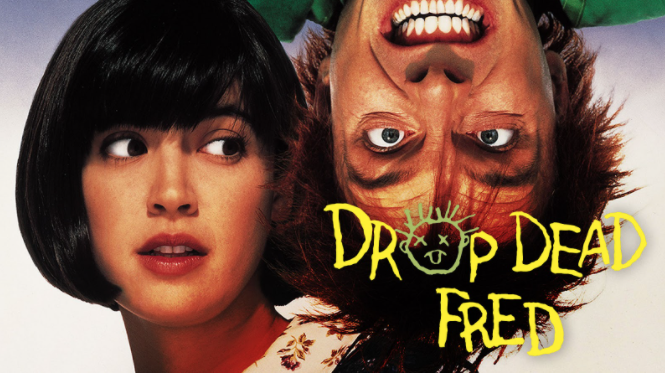 He’s more than just an imaginary friend; he’s everything she hopes to be.

“This is easily one of the worst films I’ve ever seen,” said Gene Siskel of Drop Dead Fred back when it was released in 1991.

What did he know anyway? He was only one half of a powerhouse movie critiquing duo that had been actively giving expert reviews for 30 years. I think we can all agree that not everything is for everyone, but to unleash such a strong response when questioned about an artistic rendering implies more than just an issue of preference.

Why did this movie initially fail to land well with its viewers? Is it possible that Siskel and everyone else could have overlooked the importance of mental health and protecting your peace, along with the quiet reveal about Fred’s true identity when so harshly rating the cult classic?

Fred (Rik Mayall) is an imaginary friend from the past to a twenty-something Elizabeth Cronin (Phoebe Cates) who has recently suffered a series of life-shattering events. His obnoxious antics consistently embarrass Elizabeth until she remembers his importance to her childhood. Through Fred’s special brand of encouragement, she finds the courage to dump her cheating husband Charles (Tim Matheson) and part ways with her abusive mother (Marsha Mason). Considering the deep dive this movie journeys, a basic plot explanation simply isn’t giving what it needs to give, so let’s try another route.

Elizabeth’s struggles first take shape at age five, when she is forced to create Fred as a defense mechanism against her mother’s abuse.

During one of many flashbacks, we get a look at young Lizzie’s relationship with her imaginary friend. Fred wakes her in the middle of the night to play a destructive game of pretend robbers. When things go south, Fred smashes a window for the two to escape through, exclaiming how much he loves the breaking noises. While in hiding, Lizzie sadly recounts the time when her mother told her she never does anything right, to which Fred replies by encouraging her to love herself. If my friendships don’t work like this I don’t want them!

Mental health is an overarching topic in the film, and it’s easy to spot the tells if you’re paying close attention. The verbal and emotional abuse Elizabeth suffers at the hands of her mother has likely stunted her growth into adulthood. Is it possible that she is battling a form of arrested psychological development, meaning she remains stuck at the time of her childhood trauma?

After her husband’s infidelity, Elizabeth moves back into her mother’s home, where she’s treated like a child and banned from the living room carpet. This is when her imaginary friend makes his return to discover that Lizzie has grown up. The very first “game” he plays involves using dog waste to destroy the carpet. The next morning, she wakes to find her mother vigorously scrubbing the excrement from the carpet. For an imaginary friend, he sure did get the assignment. No one puts Lizzie in the corner.

At the time of her next memory, Elizabeth is an adult and has been locked in her room by her mother after returning home from seeing a child psychologist to discuss Fred.

She remembers the time when her mother’s verbal abuse was so upsetting that Fred suggested they make a mud pie in the dining room to cheer her up. Right before her mother enters the room to find the mess, her imaginary friend flees into Lizzie’s jack-in-the-box. As punishment for her actions, her mother tapes the box shut and threatens to have her friend crushed to death if she ever touches it again.

Elizabeth tells Fred how much she suffered from his disappearance after that incident, explaining how all of the life, spirit, and “Fred” went out of her, but he assures her that he was always there. A child without hope often triggers feelings of loneliness and guilt, which can easily travel into a person’s future endeavors, affecting one’s work life and personal relationships.

After encouraging her to flee her mother’s watchful eye to attend a party where her husband is, Elizabeth smashes her bedroom window for the two to escape and exclaims how much she loves the breaking noises. Sound familiar?

Once Elizabeth has won back Charles, he convinces her to phase Fred out by taking the pills prescribed by her psychiatrist. Every time her friend tries to warn her about the ill motives of her husband, she takes a pill that slowly cripples him. The last straw occurs when her romantic dinner is revealed to be a mud pie. She threatens to take the last pill that will end his life until she overhears Charles’ intentions to continue his affair. When Fred suggests she leave her husband, she finally confesses her fear of being alone.

Coming to terms with her feelings sends Elizabeth on a journey that starts with her becoming one with Fred as he walks her through her most repressed fears. The break from reality takes her to an eerie replica of her mother’s home, where she’s faced with a sinister version of her husband, whose advances she successfully rejects. Elizabeth’s journey ends with her mother’s profile standing guard at the door of her childhood bedroom. With Fred’s help, she vanquishes her mother by releasing her fear.

Elizabeth enters the room, finds her five-year-old self taped to the bed, and frees her, but soon discovers she must return home without Fred. His imaginary form was no longer needed because she now knew that Fred had merely been a piece of her all along.

When Elizabeth returns to reality, she breaks up with Charles by dumping the dinner she had been preparing over his head and wipes a booger on his cheek. She then stops by her mother’s home to make a final attempt at discussing her childhood trauma but is met with the same verbal abuse that was used to tear her down as a child. She immediately makes the decision to protect her peace by walking away from the last toxic person in her life.

Lastly, if Elizabeth was her own imaginary friend all along, how do we explain the child at the end of the film who has her own Fred? Simple. Fred is merely a physical manifestation brought on by the need to protect oneself from something. Whether it’s a motherless child who’s consistently left with nannies who fail to fill the void of a missing parent or a woman who finds herself taking her loneliness out on her own daughter, everyone is capable of creating their own Fred; it’s called an alter ego.

Looking back at Drop Dead Fred has proven just how beautifully complex the film truly is. Much like life, there are connections just waiting to be made in order to fully understand who we are and bring us to a place of healing. What may have been disregarded or harshly rated once before can now fully shine in the realization that our trauma and mental health is deserving of respect and a safe space to work through it with grace.

Cult Classics: Give Yourself Over to the Absolute Pleasure of ‘The Rocky Horror Picture Show’