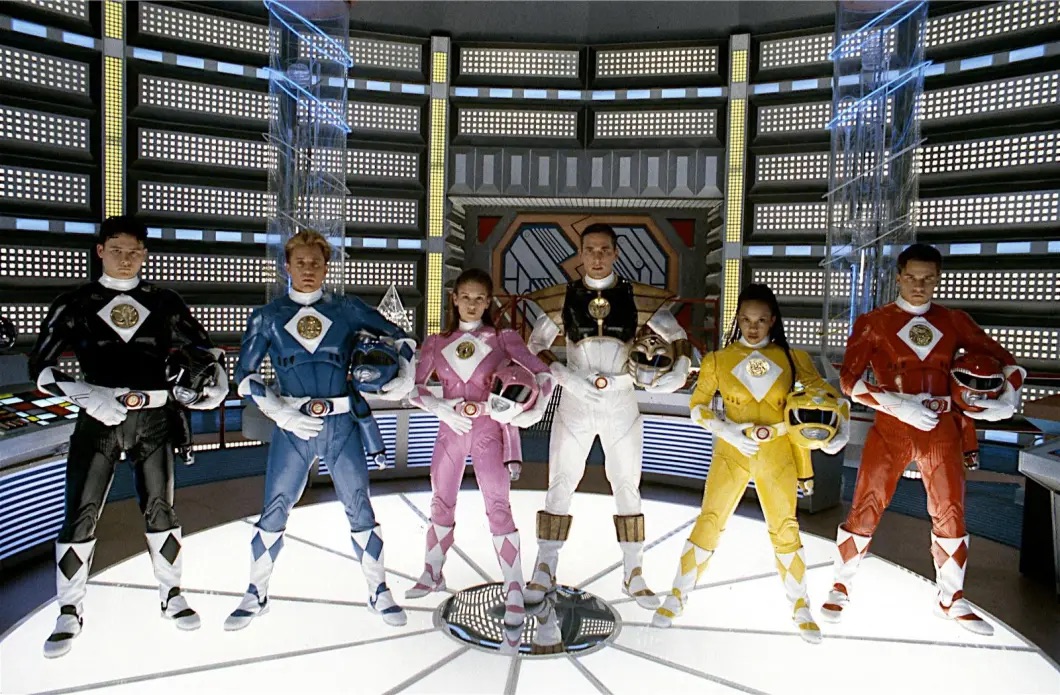 In the early 1990s, the world was introduced to the Mighty Morphin Power Rangers, a group of super athletic “teenagers with attitude.” The TV series premiered in 1993, becoming an overnight success, and skyrocketing the young cast to fame. Two years later, director Bryan Spicer (Magnum P.I.), along with writers Arne Olsen (Distorted) and John Kamps (Premium Rush), brought the Rangers to the big screen.

The movie begins with the Rangers — Rocky, the Red Ranger (Steve Cardenas), Adam, the Black Ranger (Johnny Yong Bosch), Billy, the Blue Ranger (David Yost), Aisha, the Yellow Ranger (Karan Ashley), Kimberly, the Pink Ranger (Amy Jo Johnson), and Tommy, the White Ranger (Jason David Frank) — ready to jump out of a plane for a charity skydive. To the Red Hot Chili Peppers’ “Higher Ground,” the gang doesn’t waste any time doling out their trademark quips, like: “Catch ya on the flip side!” And, of course, cool guy Tommy has a board to surf the skies. It’s cheesy and ridiculous, but it’s still one of my favorite openings.

The six teens then go rollerblading in their color-coded outfits, reminding us that they like to live life on the edge as if we forgot.

Angel Grove construction workers accidentally open a chamber holding the villainous Ivan Ooze (Paul Freeman), damning their town to his vague plan to take over and control everyone’s minds. He’s freed by memorable Power Ranger adversaries Rita Repulsa, Lord Zedd, Goldar, and Mordant, who end up as his servants. But Zordon (Nicholas Bell) is already on it, quickly filling the Rangers in on the morphological being’s previous terror. Now they have to save the town, their otherworldly mentor, and the world in general. Just another day in the life of a superhero.

Believe it or not, the one and only Mariska Hargitay (a.k.a. Olivia Benson) was cast in the role but ended up being fired for leaving the Australian set to spend Christmas with her family. She told Seth Meyers, “I was there for November, and then December, and then we were getting close to Christmas. And they had me on hold a lot.”

I was born in 1990 and don’t remember watching the original TV show, but I do know that I was obsessed with Mighty Morphin Power Rangers: The Movie. It was in my heavy (and eclectic) VHS rotation with The Chipmunk Adventure, A Rugrats Vacation, and The Rocky Horror Picture Show. Ivan Ooze was one of the most flamboyant baddies to me at that time, and I loved it. His bejeweled, all-over purple robe with the huge collar was everything, even if the twisted parts of his face creeped me out.

Power Rangers grew as one of the biggest media franchises, selling a massive amount of merchandise, especially toys. And I was one of those kids who needed the costume. Of course, I wanted to be the Pink Ranger because my young mind loved her girliness of her. However, I ran into the same problem I’d experienced with other characters. My peers said I couldn’t be the Pink Ranger because she was white and I’m Black. I resented that I felt forced to be the Yellow Ranger, but I grew to love Aisha, wanting her long braids and cropped hoodies. Who knows how many times I yelled, “Sabertooth Tiger!” while pretending to morph. Kimberly was still cool, but I had my girl Aisha. I still had both costumes, though.

In the years since the original series and first movie came out, the OG Rangers cast has shared some dark behind-the-scenes details that almost ruin the nostalgia. The cast of twenty-somethings was paid pennies for their tireless work, made to work long hours to meet the increasing production schedule, and dealt with unsafe working conditions.

Most upsetting of all is that Blue Ranger actor David Yost left the show due to the constant harassment and homophobic slurs on set. The 2017 reboot featured a gay character, Trini (Becky G), which Yost commended, writing for The Hollywood Reporter, “With the new Power Rangers movie including an LGBTQIA character, they really stepped up to the plate, and I think so many people in the LGBTQIA community are going to be excited to see that representation.”

I’ve recently started watching the original series, and I love Walter Emanuel Jones as Zack, the OG Black Ranger, and the Saved By the Bell meets X-Men vibe. Both projects have the franchise’s signature fighting style, quippy one-liners, and low-angle shots of the flipping heroes, but I’m still a bigger fan of the movie for nostalgic reasons. Mighty Morphin Power Rangers: The Movie may have received some mixed reviews from critics, but for us ‘90s kids, it will always be entertaining.