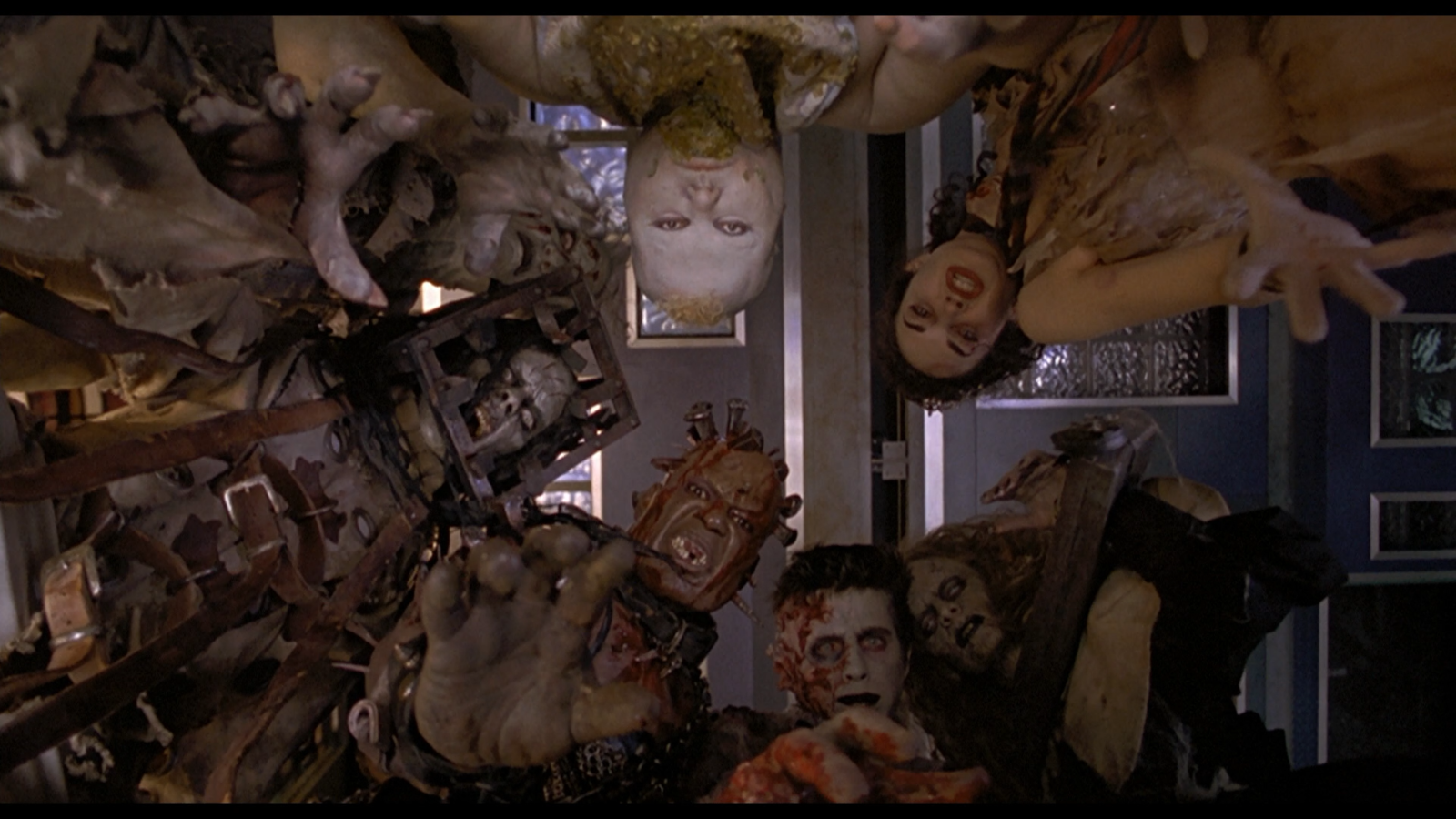 The big horror movie remake boom of the early 2000s was an interesting time in movie history. Classics like House on Haunted Hill, The Texas Chainsaw Massacre, and House of Wax all got the remake treatment and produced varying results in terms of profitability.

Director Steve Beck (Ghost Ship), with writers Neal Marshall Stevens (Hellraiser: Deader) and Richard D’Ovidio (Hypnotic), put their own spin on William Castle’s 1960 film 13 Ghosts, but it didn’t do so hot at the box office back in October 2001. Twenty-one years later, Thirteen Ghosts has gained a cult following of those who can appreciate the roster of titular spirits and high-quality production design.

Thirteen Ghosts begins with wealthy ghost hunter Cyrus Kriticos (F. Murray Abraham) and psychic Dennis Rafkin (Matthew Lillard) seeking out a violent ghost in a junkyard. One of the first things we see is a semi-truck spraying blood around to lure the ghost out, sparking a massacre that seemingly kills Cyrus and many of his employees.

Cyrus’s estranged nephew Arthur Kriticos (Tony Shalhoub), a financially unstable widower and single father, learns that his uncle died and left him an entire mansion. His two kids, Kathy (Shannon Elizabeth) and Bobby (Alec Roberts) are all about it. Along with their live-in nanny Maggie (Rah Digga), who they can somehow afford even though they’re already struggling to pay bills, the family head out to their new (maybe) home with Cyrus’ smarmy lawyer Ben Moss (J.R. Bourne).

When they arrive at the completely glass Hellraiser-like puzzle house, Dennis weasels his way in disguised as an electrician. While the Kriticos gang roams around the mansion in awe, he finds Cyrus’ collection of captured spirits in the basement. Each one has its own glass cell inscribed with Latin containment spells to keep them trapped. But the clueless lawyer unknowingly activates the giant machine (aka the house), releasing them one by one.

Obviously, the best part about Thirteen Ghosts is the ghosts. But designing a glass mansion with exposed clock-like machinery that runs on gears and cogs warrants some serious praise for Sean Hargreaves (Thor: Ragnarok), too. It’s totally giving off lament configuration vibes. Watching Dennis and the Kriticos family have to make their way through this frustrating, impossible-to-navigate labyrinth while taking turns swapping spectral glasses and dodging wandering ghosts makes me think the ghosts must be just as confused by the layout.

Kalina Oretzia (Embeth Davidtz), a ghost emancipator rather than catcher and former enemy of Cyrus, pops up out of nowhere to throw flares and give us a quick overview of the film’s mythology involving an ancient book, Hell, and the “Black Zodiac.”

But what about the thirteenth ghost? Well, it’s not revealed until later in the movie and I won’t spoil it for anyone who hasn’t seen it yet.

The spirits’ origins range from a rich girl strangled on prom night to an African American blacksmith who met a tragic Candyman-like demise that left him with a hammer in place of a hand. Most of them died violent deaths making them vengeful spirits out to kill anyone they could. The Jackal is chaos personified, truly a beast. But anyone who watched Thirteen Ghosts when they were going through puberty likely paid extra attention to the Angry Princess, aka the completely naked ghost covered in self-inflicted slashes all over her body.

Legendary industry pros Howard Berger (Werewolf by Night), Greg Nicotero (The Walking Dead), and Robert Kurtzman (The Haunting of Hill House) all worked behind the scenes to craft the prosthetic special effects, so it’s no surprise that the work is amazing. Like Mike Flanagan’s many masterful projects with tangible spectators, these ghosts were once people with their own backstories and personalities. Each character’s design itself tells a story, not so subtly showing the ways in which they died. Background details are glossed over in the actual movie but the Ghost Files bonus segment goes into each one.

These fully-realized ghosts deserve their own miniseries (and I nominate Mike Flanagan to write/direct). The Bound Woman actually reminds me a lot of the Bent-Neck Lady from The Haunting of Hill House, which makes sense since Kurtzman worked on both projects.

The scene-stealing Matthew Lillard has the most energy since Dennis is tasked with pleading with pessimistic nonbelievers to avoid putting everyone’s lives in danger. The other stand-out performances are Tony Shalhoub and F. Murray Abraham, although that might be because they’re given a lot more to work with than, say, Rah Digga. Her role as Maggie is reduced to the “hello no” nanny voice of reason, offering up a quippy “what the hell?” or “I don’t think so” at any moment. The film definitely lacks characterization and diversity.

Thirteen Ghosts is no longer a guilty pleasure but a horror movie I unapologetically enjoy watching. Yes, it’s schlocky with a clunky narrative, terrible ADR, and nonsensical editing. But for the early aughts, it’s an inventive film with top talent creating mind-blowing effects and designs. And honestly, I can’t think of a movie with a more iconic set of special features.

Thirteen Ghosts is available to rent on Prime Video (via an AMC+ subscription).