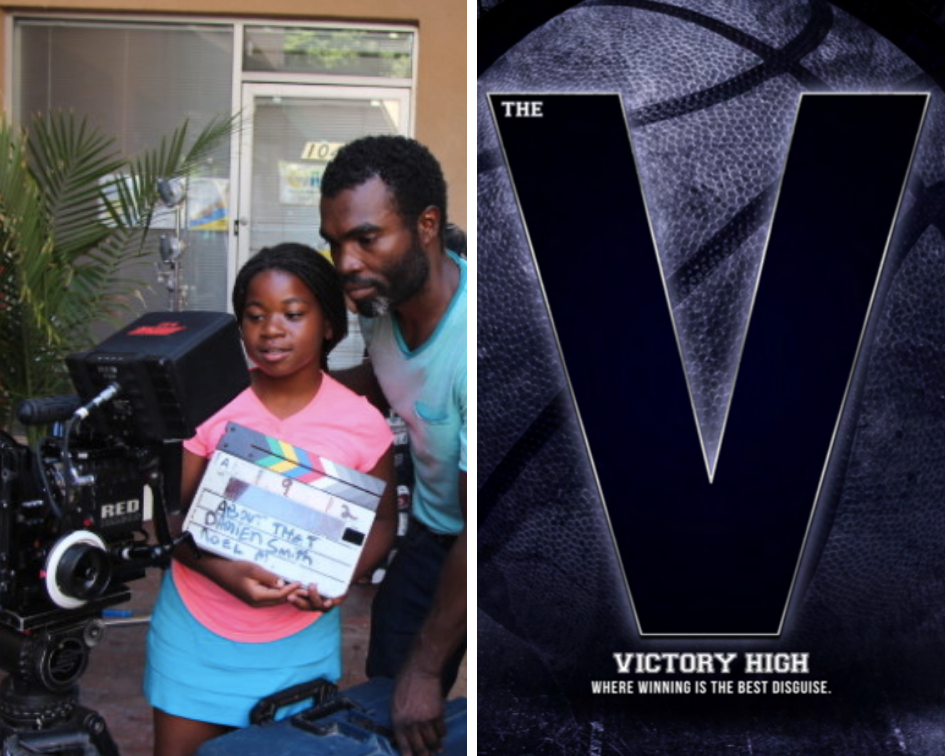 Damien D. Smith does it all. He’s an actor, writer, and director and he’s ready to tell authentic feel-good stories that are thought-provoking and encourage conversations that will envoke change in a positive and impactful way.

His latest project called The V, is what Smith describes as an open love letter to blue-collar towns across America, that cheer on the success of athletic glories and hometown pride despite the undercurrent of sexual abuse.  He states he wants to bring a voice to the voiceless and allow art to entertain as well as spark dialogue and debate on these taboo subjects of molestation, poverty, homophobia, and athletics.

Smith is the national winner of the Gentleman Jack “Real to Reel Filmmaker Grand Prize which gave him a start to fundraise a campaign for this movie. 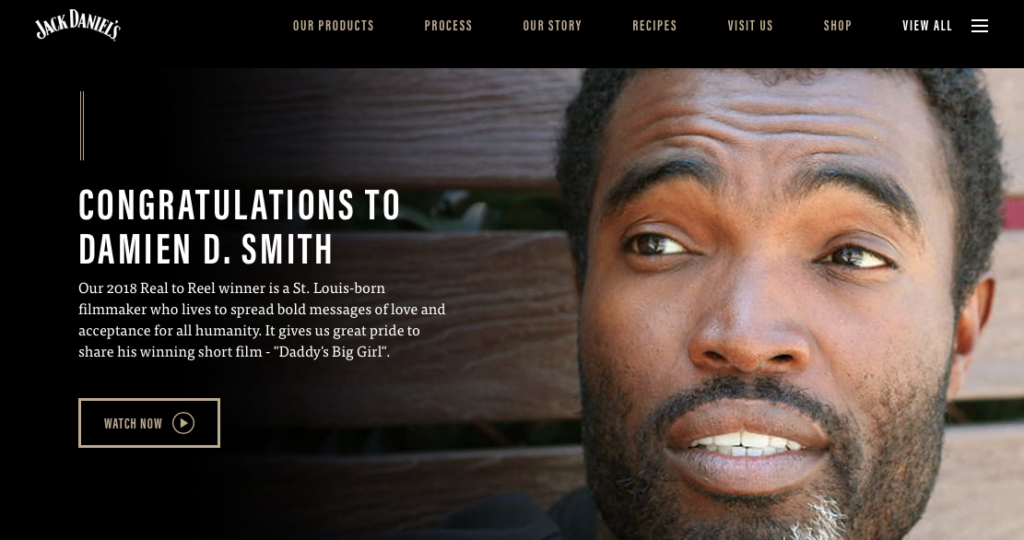 Damien D. Smith headed out to the 2019 Sundance film festival just to check it out. I chatted with Damien D. Smith at a local restaurant in Park City to discuss The V and why this project is something we should be paying attention to.

For our readers, Damien, tell us what is The V? And what actually drew you to create this project?

Damien: Oh sure. Thank you. Great question. What drew me to create this project is I wanted to address what’s going on in this climate, what is happening. When I was writing it, we heard stories about Sandusky, and what he was going on, that Olympic coach that molested all those children. I was thinking about we need to protect our children, and we need to tell a story like that. You hear rumors all throughout towns and these small towns, so I wanted to use St. Louis as the backdrop to tell the story and to bring light to these issues, and also have the residents of St. Louis. I call it a fictionalized version of true events. It’s an amalgamation of all these stories I just spoke about.

It’s about the winning high school basketball coach who is about to be abducted into the athletic hall of fame. He’s just coming off the heels of his latest state championship, but the issue is that he’s a pedophile. And the story’s told through the eyes of these two high school students. One being the newly recruited high school basketball star, and the other being the editor-in-chief of the high school newspaper and blog. She’s dead-set on taking the coach down because he molested her uncle two decades ago when he played for him and ruined his life, and it was her favorite uncle. The team pairs up to take on this Goliath-size challenge, to take down this coach who has the power of a Bobby Knight character. He has a lot of influence. He brings a lot of money to the district. He brings in a lot of attention to the school, and people around him. And also, he’s a pathway out of poverty. With that, if you guys take a look back at any of my other films, I always address social, economic, political issues, and things like that.

The thing is, what we know about predators is that predators don’t prey on the ones that are fortified. They prey on the ones that are weak. That’s how they keep ’em going on, and with this culture, it happens. The culture in these small towns, it’s another veil that allows them to hide and be protected because no one really wants to talk about this. That’s one of the reasons I made it African-American. That’s another layer, that’s another veil that protects them because no one in our community really wants to talk about the African-American predator as well. I think that’s something we really need to address. I wanted to address these pathways out of poverty, and how people prey on our young people. And also, athletics and things like that. The tagline for the film is, “Victory high, where winning is the best disguise.” Because success allows us to have a veneer that everything’s okay. We need to address the part that everything’s not okay.

Speaking of success, you are actually the national winner of the Gentleman Jack Real to Reel Filmmaker Award, and you were awarded $10,000.00.

Thank you very much. Yes Ma’am.

Tell us about that process. How did you apply? And what would you convince other filmmakers to try to get involved in this kind of project?

It’s an amazing program that Gentleman Jack got going on, and I’m so appreciative to them. Because they open up so many doors for me. You turn in your application like most festivals and things like that. The thing is that they have a selection when it comes to the top five. Then, when we made it to the top five with my film Daddy’s Big Girl, it was an amazing process. And they clearly let us know that it’s not determined by your online voting process or anything like that. It also helps you get your film out. So we went on our campaign to try to get the awareness out that it’s happened. But the film is judged mostly by a panel, just like any other film festival. The panel of industry leaders and things like that. We were there just waiting, and hoping and praying. The four other films we were up against for the winning were strong films.

What we felt that Daddy’s Big Girl had that allowed us to step ahead is that it touched on a theme that I think is not really out there right now. It was a father preparing his daughter for him not to be in her life like he’s used to. I think that’s what resonated with people, and I think that’s what allowed us to separate and push ahead of the pack. 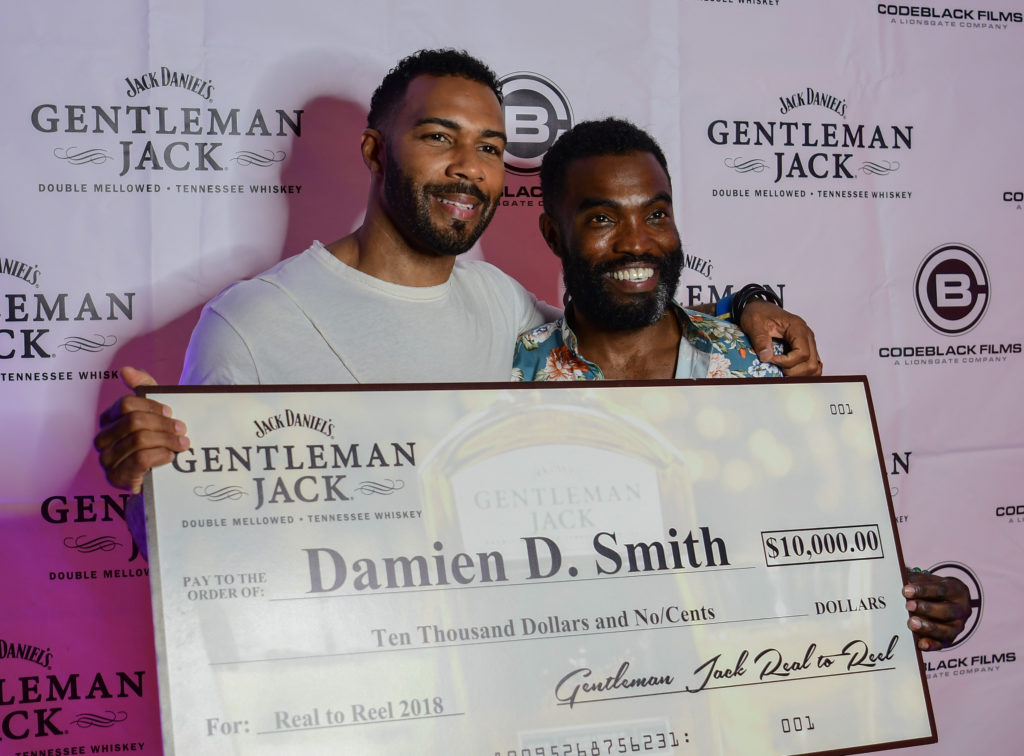 You got some pretty prolific people behind this, right? I see that Omari Hardwick is photographed with you when you won the National Prize Winner Award.

What’s his attachment to this?

For The V, nothing yet hopefully. He’s the brand ambassador for the Gentleman Jack Daniels Real to Reel competition. He is the one that I spoke with and we had great conversations and he was open to everything. He said, “Hey man, I’m really interested in you as a filmmaker.” This is the second year of this program, so I’m the second winner of this. I know they’re gearing up to go into their third year now, and I’ve been contacted about things in the future that’s coming about that I have to do. My duties as the winner of last year that’s coming up. Programs are about to open back up pretty soon. I think it’s going to open up in April or May. I have to fulfill those roles and do classic stuff like that. I’m going to be working with Omari again, and we’re going to talk about a few other things, a lot of possibilities.

What do you hope will come out of this? Where can our readers find out more about this project? Is there anything else that you want to tell us?

You can follow us on Instagram and Facebook at The V Film on social media, on Instagram and Facebook at The V Film. You can follow me, Damien D. Smith. Again D-A-M-I-E-N D. Smith. On my Instagram, I’m keeping everyone updated about everything that we got going on. In conclusion, I wrote this film as a love letter to my city, which is St. Louis. And that is a reason I’m going back to St. Louis to shoot it. Honestly, I’m based between New York and LA, so I can shoot in LA. I can shoot it in Atlanta, which is great tax incentive. Missouri, at this present moment, don’t even have a tax incentive.

Damien: I’m taking a feature production and I’m shooting in St. Louis because I want to go there and show young people that there’s a lot of ways that you can be successful. I’m a part of upper St. Louis, a part of the north side, and what I saw wasn’t always the most positive examples of role models. But they were there, and we saw that a lot of people emulated those people, and luckily I had a strong grandmother that navigated and told me what’s right and wrong. And showed me a path to go to, but I know a lot of my brothers and sisters did not have what I had. I want to go there and show them that you can do things like that, and I want to teach my people how to fish. Because I gained a lot of knowledge about the things that I’ve done. I was a national screening tour producer for six years.

I produced things at the Symphony Spaces at the Apollo. I was the executive producer of the Mix Table Awards at The Apollo and things like that, so I have a lot of skills that I’ve learned between New York and LA. And national tours and all types of things. Off-Broadway, all type of things. I want to take that home to St. Louis, and teach people to fish the best way I can. With that, I’m going to be launching out coming soon on my social media, I’m going to let ’em know that we’re all going to…I’m going to score and also all the music of the film by local St. Louis artists.

I’m looking for grips, and things like that to hire when I get home to show people. And also, if you want to shadow me. I’m going to set up an Email address where we taking applications for young filmmakers to shadow us. To shadow me in doing my thing because, again, I want to teach my people to fish in St. Louis. This film is a love letter to my people of St. Louis. Because culture is what we need to fight against. Not the individual person, the culture is what we need to address. Because a change of culture will export a change of the individual.

Thank you for speaking to us.

To show your support for The V, check out the Indiegogo link below:
https://www.indiegogo.com/projects/the-v-film-fundraising-re-launch/x/19895919#/
ALSO READ
The Cast of 'The Lord of the Rings: The Rings of Power' Gives Us a Sneak Peek Into Their Universe