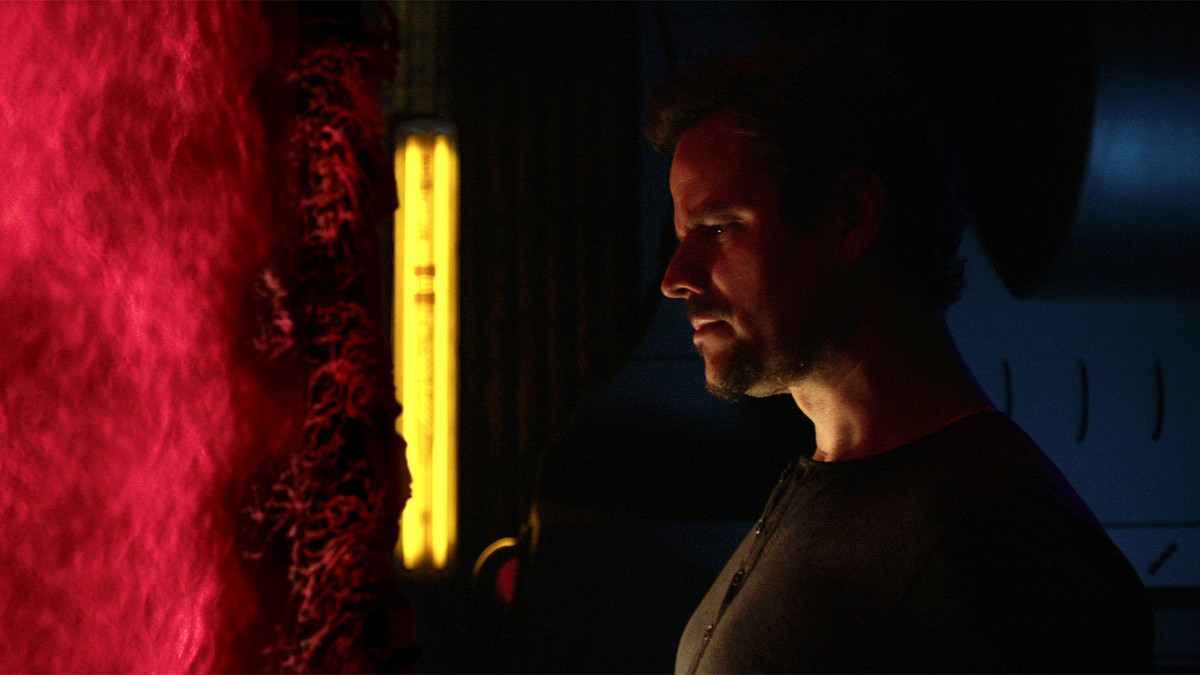 The Dwarf Star Conspiracy is pretty straight forward and kind of predictable, in that I  figured “Rebecca” was not Dwarf Star’s only synthetic human, and Rook built them for nefarious purposes. I did like that the alien he infected Three with last season was not a being Rook captured for experiments but rather his benefactor and part of an invading species looking for hosts. A shift in assumed power dynamics is always a good ‘gotcha’ moment.

Because I do the reviews of Dark Matter and Killjoys plus I watch The Expanse, I can’t help myself from comparing and contrasting different elements of these series. All of them have alien substances of varying sentience that use human bodies as hosts. I enjoy watching how each show depicts this.

Up until last night, Dark Matter did not centralize their space gunk as a major plot point. In this version of the trope, the gunk has its own fully-realized consciousness. It also appears to humans in the form of people they know like the Prophets/wormhole aliens of Star Trek: Deep Space 9. I find it intriguing that 600 years into the future humanity is making first-contact with aliens, and said aliens are not even from the same universe. I also wonder since they had technology to share with Rook if they only appear in our universe as flying black ooze but in their universe take on a more solid shape.

Anthony does an excellent job throughout the episode playing panic, vulnerability, and distress, but all the best parts of “Conspiracy” are before the main mission even kicks off. I’m getting to really enjoy these ideological strategizing meetings between Six and Two. They do so much to shape and reveal their characters and also do a fine job of laying out and even broadening the possibilities for Raza missions. Things were much simpler when they were a crew of brigands looking for their next score, I’d imagine.

During this episode’s meeting, Three comes in after suffering a nightmare, looking disheveled as he takes a sip of coffee. He joins the conversation and we’re off and running. Giving me Raza-life while setting the stage for the next adventure, be still my heart, Paul Mullie, EP and writer for this episode. This is exposition done right. Kudos.
ALSO READ
Maya Rudolph and the Cast of 'Loot' Give Their All in this Impactful Story

Another feature of Raza life I love pretty hard is that they’ve pretty much used a voting system to make major decisions since the pilot. Two listens to all sides then casts the deciding vote. This is so different from a lot of other space-based sci-fi since most of the genre is militaristic so the captain makes all the decisions.

There were some great personal conversations last week. How cute is Android and her boobs? Two is so loving and supportive. But, she also wants to check in to make sure Android is ok and this isn’t some kind of acting out due to the revelations from the last episode.

Three being panicked and backsliding into his android prejudices to justify it, feels authentic. So many of us get defensive and try to turn scrutiny around on the person doing the probing when we feel attacked. For that reason, the scene between Three and the Android in his room is easily my favorite scene in the entire episode.

Zoie plays it with an intensity that shifts between hurt feelings, concern, and even menace. Anthony is fidgety and avoidant like someone who is covering for and probably embarrassed by inexplicable terror.

Next week’s penultimate episode is as illuminating as “Built, Not Born,” and it made me tear up a little the first time I watched it. I’m excited for everyone to see it on Friday. See you then!