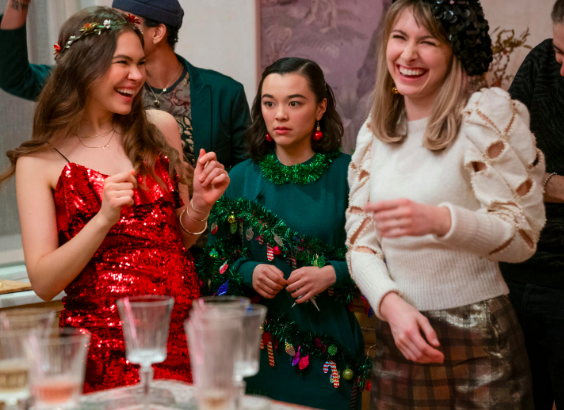 I feel drama coming. Dash is spending time with Sophia, who insists that they are friends, but it looks like he still kind of has a thing for her. She suggests that she dresses him up for the party that night as his wing woman. Dash tells Sophia he has kind of met someone. She accompanies Dash on one of Lily’s dares and states that he has found the perfect girl in his head. He explains that he will meet her eventually, but she warns him on putting girls on a pedestal. He writes in the notebook that he will be giving Lily his name but the notebook will be given to Lillian so that Lily can open it Christmas morning. That is cute, and I’m holding on to hope that they come out okay.

Lily meets with a couple of caroler friends who discuss Fiji and unfinished business for Lily. She takes time to write back telling him how he has helped her deal with the future. As she sits at home, preparing a dress, Lily feels guilty about going out with another guy when Langston comes in with a peace offering. He apologizes for withholding and hurting her, and the two get to talking about her dilemma on two guys then about notebook boy hanging out with his old ex. Langston’s advice is to go on her date, tell notebook boy about Fiji and about wanting to meet him. Lily inconspicuously meets with Boomer to talk about Dash possibly hanging out with his ex. Boomer initially shuts that down right away then realizes that Dash never mentioned that he was “hanging out with an old friend.” He’s starting to doubt it. Lily gives Boomer the notebook, which he says he will give Dash at a party that night. I am freaking out alone.

Boomer bumps into Sophia at the party, and the two are not exactly cool with each other. Dash arrives in time to add to the awkwardness. Sophia is acting like she’s a girlfriend as she mentions that she and Dash went shopping that day, as well as mentioning Dash’s favorite books to Priya. I feel Boomer’s shock through the screen. Edgar is trying really hard when he picks up Lily for the party. Lily is wearing a Christmas sweater that is decorated like a tree with lights that he exclaims no one can pull off but her. I’m concerned for Lily. Boomer calls out Dash for falling back into old habits with Sophia while pointing out how Lily is good for him. He gives Dash the notebook and departs with final warning about Sophia, just as Lily gets into an elevator with Edgar on their way up. He misses seeing Lily by a few seconds. Ya’ll I am tearing up with pure panic. If only Boomer stayed!!

Edgar and Lily walk into the party but then he leaves her alone to make rounds. Lily notices how everyone else is dressed fashionably so she turns off the lights on her sweater and walks around. Dash is in the bedroom with the coats, reading the note Lily left for him about the Coalition movie and how he has encouraged her to be bold. Edgar interrupts him for a second as he throws his and Lily’s coats, then Dash continues to read that Lily finally wants to meet in person. Dash writes his response immediately.

Priya asks the party goers on which Home Alone movie they should choose. Dash is appalled that the second is even a contender because of the geography of New York isn’t right. Lily takes notice and is the only one laughing, which makes Dash notice her. When Lily is getting a plate, Dash comes up and compliments her on her sweater, which prompts an awkward yet sweet conversation. He asks how she knows Priya, and Lily admits she knows no one so he flirtatiously asks her to take him hostage and get him out of the party. My heart. Lily questions why that is easier than partying, and Dash points out that the party is for people like Edgar who do anything that comes to mind, then Lily points out Sophia, who is center of attention and would never be alone at a party. Dash states that those who are different are the ones who end up lonely, which is a quote from a book that Lily recognizes. Dash states that they can be lonely together, then introduces himself but just before Lily does, Sophia walks up to him asking for her promised dance and Edgar pops up claiming that the party is starting to get boring. Sophia brings up that Dash likes dares and suggests that they play Truth or Dare. Edgar agrees, and Lily looks uncomfortable. I am internally screaming because we were so close.

Sophia asks Dash truth or dare, which he doesn’t choose at first then goes to dare. She dares Dash, in front of everyone, to leave the party with her and travel back in time. Lily looks at him longingly as he contemplates the idea but he decides to go because he can finally leave the party. Priya asks Lily truth or dare. Lily picks truth and gets asked where is the wildest place she ever hooked up… made out… held hands. People are staring, and Edgar doesn’t come to her rescue at all. I see you.

Dash is blindfolded as Sophia walks him to a museum because she remembers he thinks museums would be great if there weren’t people. The Morgan is closed but she was able to get the hook up to get in. He truly enjoys the experience because it reminds of a book called From the Mixed-Up Files of Mrs. Basil E. Frankweiler. Briefly he remembers Lily but Sophia dares him to come over to where she is, in a restricted area. At the party, Edgar dares everyone to play strip poker. That ain’t Lily’s life, so she tries to bounce, but he catches her as she is about to leave, offering to call her an Uber. Edgar asks if it’s true she’s never been kissed, calls her beautiful, and is just about to kiss her when notification comes in. He states the surge prices are too high for his budget then gets called over to play.

When Lily arrives home, Grandpa Arthur is surprised she’s home early from caroling. She looks at her muppet stating that tomorrow she will know notebook boy’s name. Dash doesn’t do the dare but instead asks what he and Sophia were doing here. Sophia claims that she wants to go back in time to when she and Dash were back together. He points out that they broke up because he was never himself while with her. She agrees but states that he has changed a lot. Dash counterpoints that they haven’t changed; she stills talks for him, not allowing him to get to know anyone. Sophia admits that she wants to be more than friends, then kisses Dash. Dash gives in to the kiss, forgetting about Lily and the notebook.

We all knew that Sophia was trouble. She really messed up my OTP. Christmas is the next day, and Lily could wake up disappointed while Dash will probably be happy to be with Sophia for the meantime. The two naturally flirted with each other when they met, which gives me hope but I know we need trouble before we can continue. This is going to hurt Lily.