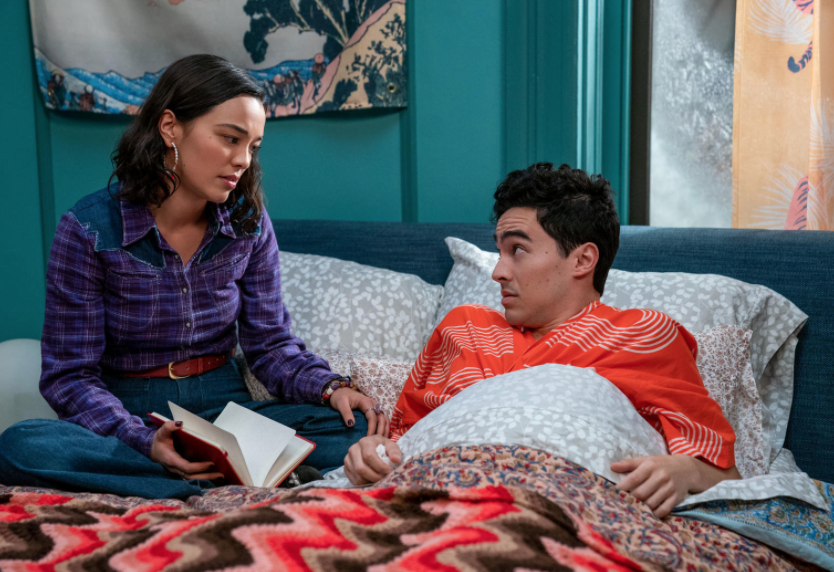 The title of this episode is perfect. Dash visits sleeping Dov and Yohnny to get the notebook. He finds out that she had great moves but disappeared without leaving the notebook. Dash takes a look around and sees the message that Lily left. She felt scared. Dash automatically feels bad for pushing her and wishes he could apologize. Dov insists that she had fun and was queen of the night. As Dash leaves the club, he finds a red boot outside. Dov and Yohnny suggest that it could be a clue left by Lily. They are optimistic.

Inside the boot the initials TDF are found. Boomer comes over to help Dash figure things out by making a list of possible names. When that doesn’t work, Boomer downloads the mommy app that could help. Dash looks up TDF on the app, which leads him to Theater Development Fund, which is a costume rental place. The two boys find out that the boots were used for the original production of the Music Man and recently borrowed by LaGuardia High School for the Performing Arts but never returned. However, one Lillian St. Clare DuBois sent cash for the missing boots. There is a bit of confusion about the boot being returned to the rightful owner, so Dash uses an analogy about how he is the Phantom that wears a mask and how he needs the boot to find his Cinderella. He gets the boot back, but tells Boomer he didn’t mean all those things about love; he just needed the address. Oh, come on!

Lily visits a sick Langston and questions him on why he didn’t warn her about Grandpa. It seems Grandpa has banned Benny after grounding Lily. Busy man. Lily wants Langston to drop the notebook at the pizza parlor with Boomer. Langston has a fever and can’t. Lily explains why she can’t go and what happened the night before. He almost concedes until he sees the message Lily wrote about quitting. If she is going to quit, she needs to go out and do it herself.

Boomer and Dash are outside of the address, and Dash is nervous about ringing the bell. My heart can’t handle it when the doorbell rings. Lily opens the door to find Grandpa’s friends and her uncle Sal (Santa) on the other side. Grandpa won’t let Lily out to “buy medicine” for Langston and tells his friends to keep an eye on her because she is grounded.

Dash practically begs Boomer to speak to Lily for him but changes his mind, stating he has to do it. When he rings the bell, a much older woman by the name of Lillian (Jodi Long) opens the door and claims the boot as her own. He asks her about the red notebook, which prompts her to ask him in for coffee. Her home is quite nice! Lillian informs Dash that he is looking for Lily, her great niece. Hello Mrs. Basil E! She explains that the nickname comes from when she used to send Lily and Langston on scavenger hunts like in the book From the Mixed-up Files of Mrs. Basil E. Frankweiler. Dash is familiar with the book and wants to speak to Lily but is denied the opportunity when Lillian is disappointed that he doesn’t love Lily. Lillian questions if Dash believes in fairies, the power of wishes, or love at first sight. Despite his claims that he doesn’t believe in anything, Lillian points out that he believed he could find a girl with a boot. How true. Lillian informs Dash that Lily’s grandpa wouldn’t dare let him meet her and doesn’t even let her see Lily. These two old siblings need to work things out. Dash asks her to try and explains that he is concerned about Lily’s wellbeing and admits that he cares about her.

This prompts Lilian to go see her great niece despite old wounds. Good answer, Dash. Lily admits to Lillian that she is a little wrecked from the night before. Lillian informs Lily that notebook boy cares about her and is concerned about Lily. She insists that Lily find a way to talk to him about her doubts when Grandpa finally notices Lillian then proclaims that Lily is grounded. Grandpa Arthur kicks his friends out, including Lillian. Grandpa Arthur is upset with his sister Lillian because she flew Lily to Las Vegas, back when Lilian went on tour with the Rolling Stones. Why can’t my great aunt be just as cool? Lillian insists that she will have her say, as Lily’s godmother, despite Grandpa Arthur proclaiming that she is a bad influence. Lily can’t stay to hear them hash it out but watches from afar. Langston thinks that she will never be allowed to leave the house again. That fever makes him a downer. This prompts Lily to talk to the two elders about living her life, but she finds that Grandpa is crying. Lillian leaves Lily to have a conversation with Grandpa.

Grandpa tells Lily that he proposed to his girlfriend, Mabel, but she turned him down. That’s why he is back early. Mabel doesn’t want to move to New York but Grandpa Arthur lives in New York with his family. Lily asks him if he loves Mabel, which he admits. She makes him feel less lonely, a feeling Lily can relate to. She suggests that he talk to Mabel about working things out.

Grandpa isn’t happy about coming home for Christmas to be less lonely but finding a naked boy in Langston’s room and Lily out partying, but he admits he overreacted. Her grounding sentence has been reduced to the rest of the day and he will take her out for ice cream. Lily suggests that they get pizza instead. From Two Boots.

Boomer is on counter duty and is relieved to see Lily. Lily requests that Boomer deliver an order before five o’clock. Boomer rushes out of the shop despite the line of customers. He hands the notebook to Dash, explaining that Dash needs to be on the Q train before five. Dash sprints to get on the train. Lily’s voiceover explains how she felt the night before, after seeing his message to her, and seeing the good that opened a whole new world for her to see. She wants him to experience the same thing.

Starting in Dyker Heights nutcracker house, Lily requests that Dash writes down what he sees then to look again, giving it another chance. The second time, Dash notices an older loving couple. Lily’s voice over explains that they make their own magic and the notebook is magic. She wants him to keep looking for the good stuff. Lily helps him out by having him at the last house on the block by five where she leaves a sign. Dash is surprised by a Christmas sign saying “Believe.” Her voiceover states that she believes in him and asks if he believes in her. It starts to snow, and Dash lights up, enjoying the moment. Then his ex Sofia texts him a pic. She’s in town and asks if she can see him. Conflict.

Throughout the series, we are meeting more and more of Lily’s family. Finally meeting her great aunt ushers in the discussion about family and why it is important but also allows Lily to break out into being daring more. The show is bringing beautiful Christmas vibes and has me nostalgic for snow, Christmas lights and decorations, and songs. Sofia is obviously going to crush my OTP but hopefully that doesn’t last long.