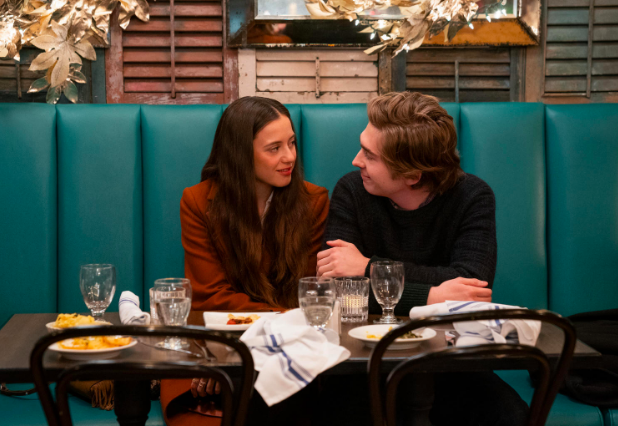 Past hurts are named in the episode title. I sense drama. Dash is distraught about his ex being back in town. He explains the situation to Japanese grannies while learning to make mochi in a class. The boy struggles hard. Apparently, that is Lily’s dare for him, while his dare for her is an artsy pop-up that requires her to build a manifestation that occupies her mental space. She thinks it is an easy task. Dash’s perfect mochi is thrown away, and Sofi is continuously texting him. Lily’s advice to him, through the notebook, is to focus, go with the flow, and listen to his mochi. He finally does and gets an applause from the grannies. Dash thinks it was a worthy torture. Lily finds that after making her craft, she has to break it. She’s not prepared to “break shit to feel better.” Dash’s instruction is to let out all her messy, negative feelings, something Lily isn’t used to.

Dash finds out that Lily was unable to unleash the fury on her muppet. Lily bumps into Edgar at a dog park. Actually, Edgar searched her out on Instagram, noticed that she posts pictures of dogs at 3:00 p.m., and has been coming to the same park every day in hopes of bumping into her. That is too creepy. Edgar continues to use the word “weird” to describe what Lily does; i.e., making dog snacks and bringing them to the dog park but not having a dog herself. Lily questions why he is even there talking to her, and his explanation is that he came to apologize for the other night, admires her for being able to let go, and is jealous of who she is. He thinks that she is cute. Lily questions if he remembers the last time they spoke, but he doesn’t at all and she’s not ready to revisit that day. Edgar asks Lily to join him at a slam poetry event, and before he departs, he indicates to the homemade bracelet he has on. Did this boy keep the bracelet all these years? Oh.

Lily explains in the notebook that she feels the notebook is a good way to release all emotions, good or bad. She trusts him. Cute. Dash receives texts from Priya, inviting him to her Christmas party, and Sofia won’t leave him alone. Just as he is indulging in scotch and writing in the notebook, Dash’s father comes home unexpectedly with Leeza. Time for a talk. Father explains that Leeza wanted to stop by Tiffany’s on the way to Half Moon Bay. Dash points out that his father wasn’t going to tell Dash that he was in town. His father invites him to dinner and eats the mochi that was in the fridge. The man is not the ideal father figure. A very stressed Dash writes in the notebook on how it is a Christmas nightmare. It would seem that Dash’s father has had strings of girlfriends who Dash has had to meet over dinner. These dinners allow Father to try to act like he is a great parent whilst also not paying attention to his son. The only relief for Dash, back then, was his ex Sofia. Dash rips that page out and starts again but can’t confess his feelings. Instead he calls someone up to join him for dinner. I hope it is Boomer.

At home, Lily overhears Langston and Benny arguing about Benny leaving for Puerto Rico. Benny leaves upset, and Langston is in tears because they broke up. Langston can’t handle a long-distance relationship due to a bad experience in the past. Lily tries to relate, but Langston points out that she has a pen pal, not a relationship, and could easily mail the notebook from Fiji. Lily thinks it is weird that she would need to mail anything from Fiji and questions Langston. He tells Lily that her parents are in Fiji because their dad was offered a job there. If he takes it, Lily will have to go with them, but Langston will be staying because he is a legal adult. Lily is upset that they didn’t tell her, but Langston states that she spends all her time with her parents and grandpa and they didn’t tell her so she wouldn’t freak out. Lily walks out and Langston realizes too late that he has hurt his sister. I guess she has a reason to break things now.

Dash’s dinner is awkward as predictable. He does his best to ask Leeza more about herself but a question about skiing turns to his father making a side remark on how Dash doesn’t like sports or play with balls. Dash is quick with a comeback and luckily his relief arrives. The boy called Sofia (Keana Marie) to join them at dinner. Gordan is pleased to see her. Dash looks relieved to see her, and Sofia is ready with an escape plan, just in case. Gordan takes hits at his son in order to make himself look like a good father who just wants to spend time with his son, questioning Dash as to why he chooses to read a book instead of traveling with him. In his head Dash points out all the reasons as everyone waits for his answer. Gordan can kick rocks for putting Dash in such a situation. I hate it. Gordan dares to ask if Dash will fight him on this, too, with a smirk on his face. I want to punch him. Dash hears Lily’s voice telling him to “listen to his mochi.” Dash takes a couple deep breathes then responds with a memory of an old bookstore that Gordan used to take him to after T-ball games and admits that it is possibly the reason why he loves books. Gordan is surprised by the response and brings up a bookstore that he and Leeza found. This sparks a lighter conversation. Good for Dash.

Lily is struggling with her emotions and calls for Boomer, but neither he nor the notebook is available and she wants to write her feelings. While she is out stomping about, Lily passes by a family of snowmen then hears Dash’s voice reminding her to “release out all her negative emotions.” Lily smashes the snowmen to bits, yelling out her frustrations. Then the girl stomps into the slam poetry event, walks up onto the stage, grabs the mic from the emcee, then asks if Edgar is there but he isn’t. Lily begins a rant on how her life sucks. She finally notices Edgar and points out how she feels because of him. Lily walks up to him and explains how that night he stomped on her feelings affected her in the long run then calls him out for having the audacity to ask her out after he forgot all that. Someone yells out that maybe Edgar liked her. Lily isn’t having it. Boys can’t be mean to girls and get called cute for it. The crowd supports this. She unleashes who she is upset at, but tells Edgar that he doesn’t get that power over her anymore. Edgar surprises Lily by apologizing for being a dumb 12-year-old and asks her out to a Christmas Eve party the next night to make it up to her. This is all happening in front of an audience. I would have freaked, but Lily agrees then sits down at the table with Edgar.

Wait, is this the same party that Priya has invited Dash to???

Dinner with Gordan went successfully. Gordan suggests that he and Dash hit up the old bookstore when he gets back. He even states he is happy that Dash is back with Sofia, which Dash denies immediately. A quick handshake and a promise to see him in the new year, then Gordan is gone. Sofia exclaims that she is surprised at the Dash that handled dinner and informs him that she is moving back to New York and wanted them to be friends again. She invites him to a social gathering with her friends. Her friends include the sarcastic Priya, and also Edgar who is excited to tell Dash that he went to a poetry slam and had a breakthrough. Everyone wants to know if Dash is going to the Christmas Eve party, even Sofia, who wants to go as friends. He agrees.

No good will actually come from this party. My OTP is going through a hiccup of people from their pasts. Ultimately, I bet they will realize that they have outgrown the two people and need only each other. The lack of Boomer in this episode is unsettling, but I’m sure he will be the voice of reason for Dash and Lily. Langston really needs to rein in his emotions and think of others before he speaks. I do hope Lily works things out before the Fiji madness drops.