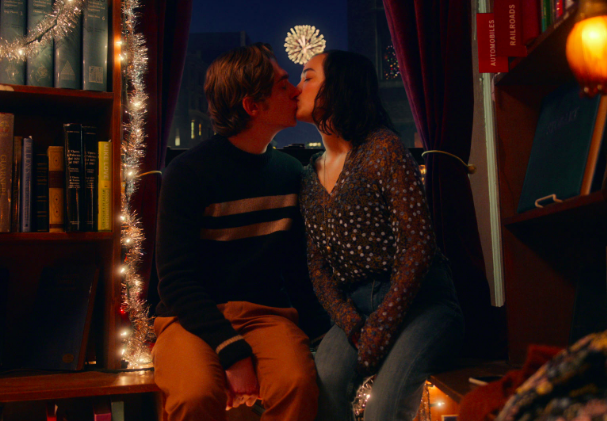 Dash is staring at books, looking, maybe hoping, for the notebook. The bookstore employee gets his attention and hands Dash the notebook then disappears. Lily’s last message to him is sad as she explains how she currently feels and that she is moving to Fiji. There are nine hours left until midnight. This day is going to be an adventure.

Lily and Langston walk and talk about her move as well as boys. Langston cheers her up with a story on his most memorable kiss then tells her a new start doesn’t mean a new country. She brings up Benny moving to Puerto Rico, but Langston states that Benny isn’t moving; he’s visiting his abuelita for two weeks. Thank goodness Lily hits him because this child needs to figure out his life.

Dash is desperately trying to reach Boomer by calling then searching Instagram for an idea of where he is. Boomer is at a Jonas Brothers’ concert. Seven hours until midnight, Dash is searching the crowd for Boomer. Boomer doesn’t want to hear anything from Dash, points out that he was being a butthead on Christmas, and is no longer helping Dash.

Priya, Dov, Yohnny, and Sofia all appear one by one voicing their disappointment in Dash. Boomer points out that Dash hadn’t talked to him for a week and pushed everyone away. How dare he think everything is cool. Dash states that he came to a Jonas Brothers concert for Boomer. This must be a big deal because now Boomer is happy. Dash requests a place to talk about Lily. The whole gang talk things out in the Jonas Brothers’ trailer. Dash wants to fix things up before Lily leaves at midnight for Fiji.

Sofia points out that fairy tales are written by men who see themselves as the prince saving the princess. She thinks that is what Dash started off doing. Nick Jonas interrupts by stating that Dash needs to go to Lily as himself and be real. Nick says that he got deep and vulnerable for his proposal. Dash takes that advice and runs with it but not before hugging Nick Jonas on his way out.

Six hours left, Lily and her family are participating in a traditional ceremony. Grandpa Arthur booked the temple just for the family. Langston informs Lily that Grandpa is about to break out the otoshidama, which he will exchange by telling the whole family everything that she has done wrong.

First up, Langston. Grandpa spills the tea on Langston leaving NYU due to a broken heart as well as finding a naked boy in Langston’s bed. Healed heart means Langston can go back to school according to Grandpa.

Next up, Lily. Yikes. Dash is making the proper plans to get everything ready for Lily. Grandpa’s disappointment comes from the reports given by family members on what she was getting up into with Dash. Snitches. He was initially going to have Lily stay with him but realized that New York isn’t best for a teen. Luckily Lillian walks in despite Grandpa Arthur claiming that the event was only for family. Can these two squash their beef already?

The family is perplexed by her being there Grandpa continues by giving Lily an out: Lily has to state that Dash is responsible and made her do it. Lily doesn’t take the out. She states that at her age, she’s doing what she’s supposed to, then promptly calls out Grandpa for not acting his age by refusing to make up with his sister and his girlfriend Mabel. She calls out Langston for breaking up with Benny, and she can’t believe she was taking his relationship advice, then tells her parents that they should have told her when her dad lost his job. That’s right girl. Back to Grandpa, Lily proclaims that she is disappointed in him but won’t be budging on Dash. He states that Lily can’t stay. Four hours left…

Langston sees the notebook for Lily just as she is leaving but doesn’t give it to her, instead puts it away. Dash is at the bookstore waiting for Lily. In the cab, Lily’s mom asks her about the boy. (Now you ask, Mother?!?) Langston decides to read the notebook, and whatever he finds is enlightening.

The bookstore is about to close for the night but Dash begs for it to stay open. Lily gets a text from Langston that is a picture of Dash’s note in the notebook. My heart. He states he knows her from what she has written in the pages and has been falling in love with her.

Lily gets out the cab that is stuck in traffic jam then runs to the bookstore but finds it locked. Luckily, a Christmas elf is there with keys. Lily walks upstairs to find Christmas decorations and a tree stocked with ornaments of memories that they built. There’re also pretzels, pies, pizza, and mochi: a taste of New York for her last night. Lily tries to explain how she feels about Dash with words, but it’s harder for her so she kisses him instead. Just when she tells Dash she has to leave, she gets a call from Grandpa.

Langston is just about to leave when he finds Great Aunt Lillian in the kitchen. Apparently, she was invited by Arthur to discuss an arrangement.

Lily gets off the phone with her grandfather. Dash comes around the corner to find out if everything is fine. Grandpa Arthur spoke to Lily’s parents about Lily staying with him, or Lillian while he is in Florida, if she wants. She’s surprised that he compromised. This prompts Lily to try to apologizing her parents face to face. However, the two are now locked within the Strand because they neglected to read a sign stating not to close a door. Dash comes up with ideas on how to get out, but Lily points out that her family doesn’t know she is there.

Benny is watching TV with his mom when their window is hit by snowballs. Langston starts yelling Benny’s name, and Benny opens the window to find Langston holding a notebook for Benny to write and mail it from Puerto Rico. Finally.

Boomer and Sofia are coming out of Collation together, holding hands. I’m not mad at this but I need details. Edgar is alone on New Year’s. Clock hits midnight as Dash and Lily enjoy being stuck together, then share a kiss as fireworks blast in the background. They are cute.

When I say that I was stressed during this episode, I am not lying! I can’t remember the last time that I shipped two people so hard. Maybe I am in the Christmas spirit or just enjoy a good storyline that involves books, romance, and bravery. Many times the characters called out tropes and worked in ways to communicate in relationships as well as friendships. It could have done more, but with eight episodes there’s only so much time.

I loved the idea of finding love in a notebook by taking dares and writing out honest feelings. I really liked adding in Lily’s culture and normalizing it. We need more of that. Frankly, I’m adding the book to my list and suggesting it, and the show, to friends. The Jonas Brothers were a delightful cameo. I guess I got Lily’s Christmas spirit now. I hope no one dashes it. Get it? I know, I know, corny joke. Merry Christmas!