It’s heavy lifting for all involved, with David Ayer returning to some of the themes and story points in his lauded screenwriting work on Training Day. It’s also as high as high-concept experiments really get, with attention to detail being paramount and tone requiring careful management for the piece to succeed.

We’d like to thank David Ayer for letting us field a few questions in advance of Bright‘s upcoming release on Netflix. 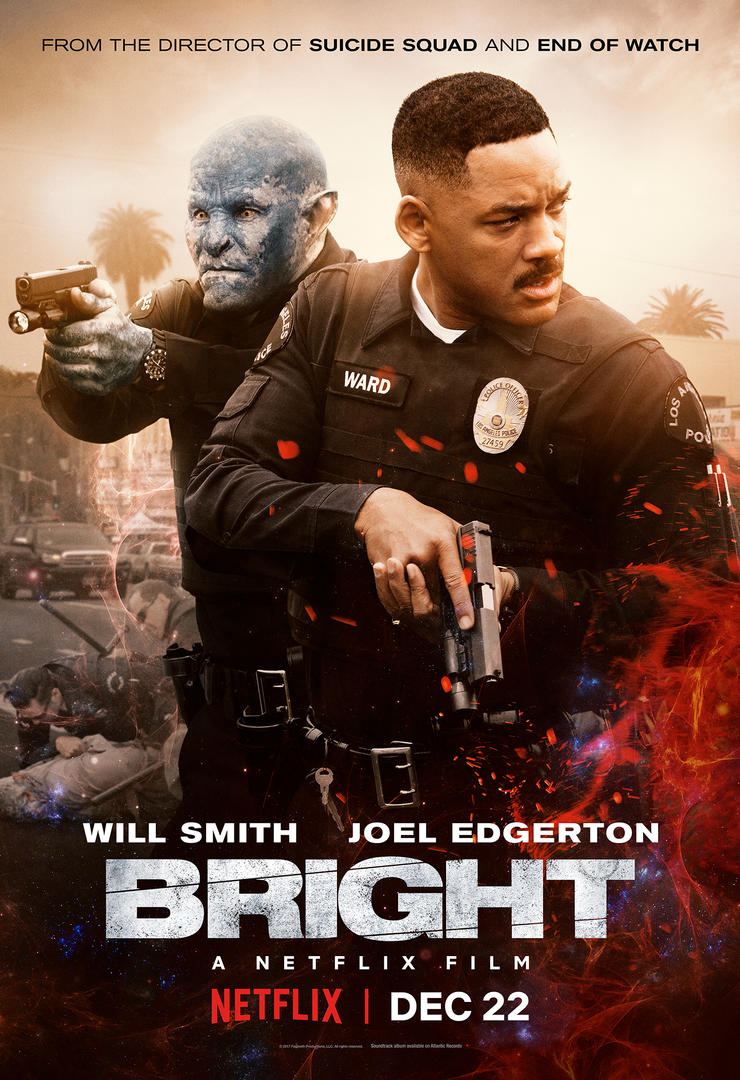 Leonardo Faierman: Recently, I heard that there’s been a very limited international tour of the movie. Places like Tokyo, Mumbai, and such. I wanted to know what the crowd reaction to this tour was, because my first thought was: Do you think that you need an intimate relationship to the American urban environment to understand the movie?

David Ayer: For sure not. We just came out of Comic-Con in Brazil, and we also showed people the movie in Argentina. A lot of the issues going on today are universal to a lot of societies, where you have the haves and have-nots, all these disparities. I think injustice is universal, and sadly it is a theme in our lives today.

Leonardo: There’s something of the universal that the film is anchoring on.

Leonardo: What ended up as your personal favorite scene in the film?

David: Wow. That’s funny. Probably the scene where they’re just driving and talking and hanging out. Because the movie is really about the chemistry that Will (Smith) and Joel (Edgerton) have, and you get humor there, you get to see them hanging out, it’s really the engine that moves the movie forward.

Leonardo: That makes sense, especially because I feel like that’s the scene I keep seeing shared and reflected on on social media. Like, that’s the one that people got, like, “Okay, I get this movie now, it’s going to be this.”

Leonardo: In making up orc culture, were there real-life ethnic or cultural aspects that you investigated? Or was there more of an urge to try to come up with something whole-cloth, in creating orcs and their backgrounds?

David: I really wanted to just come up with something new, and figure out how to give the orcs their own voice. A lot of it is just economic. The orcs are the have-nots, the cops smash on them, there’s a lot of prejudice towards them, and to have this rich culture and rich community—that thing happens where it’s like, “Well, everyone’s gonna hate on us? Well, we’re going to love on us, we’re going to love ourselves, we’re going to respect ourselves.” I wanted to give them traditions, and show how tight they are together.

Also, do you give a shit?

David: [laughs] No, no one’s raised their hand and been like, “According to the orc manual, this is incorrect.” But, typically, those movies aren’t [set in the] modern-day, they don’t really dive into what the orcs are about, other than, hey, they’re bad guys doing bad shit.

So, for me it was wide-open.

Leonardo: If you could equip an audience member before they go into this movie—like someone on Netflix right before they queue this up—with one thing to keep in mind, what might you tell them to help their enjoyment or their understanding of it?

Leonardo: It had some pretty intense set pieces. I think, personally, my favorite scene in the movie, because I don’t know if I’ve seen it before or often, was the entire action sequence in the convenience store / gas station. It was just so ridiculous, you have a car spinning around, people shooting each other, crashing into walls. It was a very elaborate action sequence, but it was just so localized.

David: Yeah, that was a brutal one to shoot.

Leonardo: I can only imagine, because it was really close and really focused. For someone who’s done a lot of action sequences, that one in particular seemed like a strange one. Was there anything weird about the production of that scene, or any challenge, or specific reason why it was a challenge?

It’s exactly that. We had a car inside this set that we built. A lot of rigging and a lot of stuntwork. Squibs, fire, and explosions. If it could happen, it happened.

Leonardo: The other thing I think when watching Bright, is that there’s so much world-building, but a lot unsaid. A lot that isn’t even mentioned outright at all. I’m wondering if there was some really special or interesting stuff that was left out of the finished piece? Like, you just couldn’t fit it in?

David: Not really. Because I didn’t want to overload the audience with a history lesson, or all this mythology. People are smart, man. People have grown up on comic movies, comic books, these sorts of stories. I like to let the audience figure things out for themselves, and sometimes I think that movies can—it’s like, [turn into] a school lesson, where you have the characters explaining things.

Everything I shot is pretty much in the movie, there’s nothing that got left on the cutting room floor that I miss at all.

Leonardo: Last question: how did you go about developing the particular looks of the orcs, and did that change at all throughout production?

David: Yeah, that was probably the hardest thing, was to figure them out. A lot of illustration, a lot of sculpts. It’s funny because, one of the first illustrations was where we ended up back at, after just a long time of research & development. [You end up] building the masks and sculpts, and you take the sculpts and you look at them, and it doesn’t quite work, and you throw the mask on the actors and you don’t feel right.

It’s scary because you’re taking something that only exists in the imagination, and you gotta make it work on camera in a closeup. It was a little bit scary, but once we nailed it? The makeup’s incredible.

Catch Bright this Thursday, December 22nd, on Netflix. Trailer below: