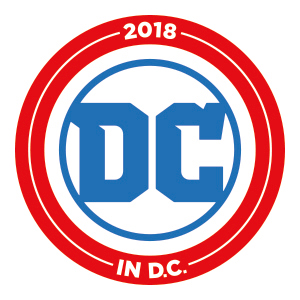 This weekend, I had the pleasure of attending the inaugural DC in D.C. pop culture event. Here, many Executives, comic book writers, creators, Executive producers, actors and more from the world of DC Comics and Warner Bros. Television were able to join forces in Washington D.C. to discuss some poignant topics, debut the world premiere of Black Lightning, and more! Here are some things I learned from the DC in D.C. event that I am already craving more of:

1.) Black Lightning is a labor of love that hopes to change the narrative– The darling of the weekend was truly Black Lightning, as everyone rallied in support of the new CW show. It was so inspiring to see so many people come together and hear them talk about the show’s social and cultural relevance, it’s critical importance, and their eagerness to see more of this creative giant! Salim Akil and Mara Brock Akil (Co-creators and Executive Producers of Black Lightning) spoke specifically about how this journey from creation to TV has taken almost two years, but in those two years, the vision always remained the same. The goal: Create a show that depicts a new normal on-screen for Black men and Black families first. On this show, the superhero elements come second only to creating a positive yet multifaceted image of Black families and Black communities on TV.

2.) The women of the Arrowverse want to see more sisterhood- During roundtable   interviews with Candice Patton (The Flash), Danielle Panabaker (The Flash), and Caity Lotz (DC’s Legends of Tomorrow), it became clear that the women in the Arrowverse are all about girl power. When asked what they want to see going forward with their characters, it was almost unanimous–they want to continue to dive into the friendships with the women they share a screen with. While the Arrowverse has done a lot for on-screen diversity in this age of DCTV, I have to agree that the female friendships are less than well fleshed out. It was refreshing to hear that the actresses are advocating behind the scenes, for the very things that we live-tweet about weekly when watching our favorite shows. Increased character development and rapport between women can never get old and can only increase realism in this superhero fantasy world.

3.) Comic book creators are heroes and the fountain from which gold flows- Nothing but praise for the comic book creators that were present at the festival, which included: Geoff Johns, Denys Cowan, Alice Randall, Julie Benson, Shawna Benson, Shea Fontana and many, many more! It was clear that they are the river from which these robust characters and stories flow. They were appreciated not only by fans but their peers, and we got to celebrate them for their past, current, and upcoming collections of art!

4.) Black Superheroes matter and always have- In the age of Black Lightning, we need more representation on-screen. During a panel that featured actors Chris Chalk (Lucius Fox on Gotham), David Harewood (Martian Manhunter on Supergirl), Candice Patton (Iris West-Allen on The Flash), and Cress Williams (Black Lightning on Black Lightning), we got to hear how their “accidental activism” (as Chris Chalk so perfectly coined it) has come about due to taking on these roles and why representation matters not only for this generation but the ones to come. Alice Randall got to share her experiences not only as a comic book creator but as an educator and Professor and how all of the art today will go down in history for little kids and future creators. Our own Founder and Editor-In-Chief, Jamie Broadnax, discussed the age of social media and how that plays a role in getting characters that look like us on-screen and helps to keep them there! All panelists agreed that this is just the beginning, and there is more work to be done in the realm of representation for all marginalized communities!

All in all, DC in D.C. was wildly successful and a true conversation starter for very important topics in this creative space. Everyone involved was open, transparent, and eager to share their personal experiences in an attempt to help motivate and drive change. I cannot wait to see what they cook up next year for DC in D.C.