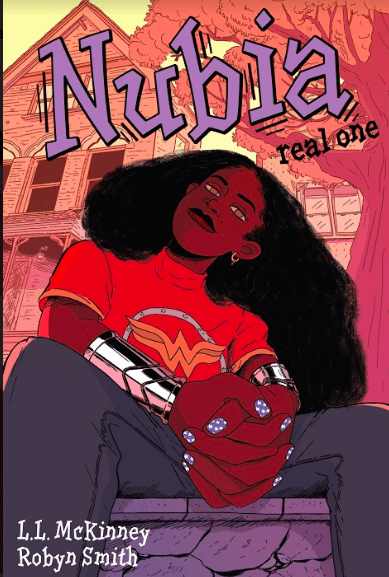 Nubia now has her stand-alone story in DC Comics’ Nubia: Real One due for release next year.

Nubia: Real One is an original young adult graphic novel written by acclaimed author L. L. McKinney, illustrated by Robyn Smith and colored by Brie Henderson. This #OwnVoices story puts a fresh twist on Nubia — Wonder Woman’s twin sister — and follows the character in high school as she navigates a world filled with racial injustice, school violence, and other timely issues.

The original YA graphic novel is an endearing tale filled with heart and wit and follows a teenage Nubia as she learns to embrace her true self in a world filled with racial inequality, school violence, and other timely issues affecting young people today. The book hits stores and online retailers on February 2, 2021, and today, DC revealed a first look at the story.

McKinney is the author of several acclaimed works including the A Blade So Black trilogy. She is an advocate for equality and inclusion in publishing, and the creator of the hashtag #WhatWoCWritersHear. A self-proclaimed “blerd,” Nubia: Real One marks McKinney’s first work with DC.

“What’s funny is I didn’t initially set out to pitch a Nubia graphic novel,” said McKinney. “I was invited to pitch something else, but I made the decision when writing the pitch itself to add in Nubia. I’ve been a fan since pretty much birth, and I’ve watched her get moved around and appear in various iterations, none of them touching me the same way her original one had. I mean, this was Wonder Woman’s twin sister, just as strong, just as fast, if not stronger and faster. And she was BLACK! So, I added her into my pitch for the other project. I guess something about her stuck out to the team because they emailed me and essentially asked for a pitch about Nubia.

“As an Afro-Caribbean artist, I’ve always strived to center the Black community in the comics I make, so being hired to illustrate Nubia was a dream,” said Smith. “When I heard L. L. McKinney was the writer, I was even more excited. Working together has been great, especially since our artistic objectives seem to be the same: all Black everything. In Nubia, I wanted to focus my illustrations on creating something both light and emotionally resonant. Most of my work is heavily influenced by Harry Lucey’s Archie, so finding a way to incorporate that charm and joyful feel into a story centered around more serious issues was important to me. I hope fans reading Nubia feel the same sort of excitement I felt illustrating the characters and their beautifully crafted stories.”

The original graphic novel is available to preorder now and debuts everywhere books are sold on February 2, 2021, just in time for Black History Month. See attached for covers and interiors revealed today, and below for the official book description.