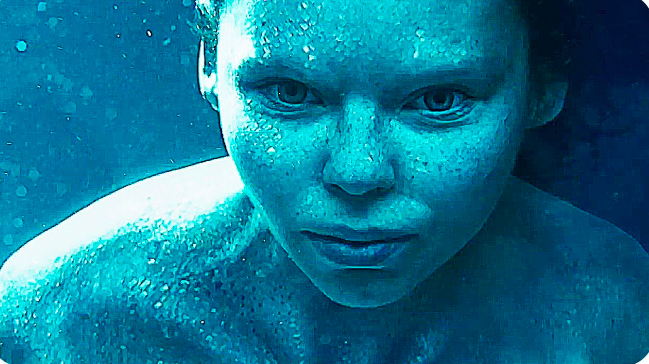 Disney Freeform’s Siren is one of the most surprising and magical stories to hit the small screen in years.

Following the mermaid Ryn (Eline Powell) and her partners Maddie (Fola Evans-Akingbola) and Ben (Alex Roe), Siren has created a world where an intelligent humanoid underwater species exists and is forced to come to land due to environmental devastation caused by humans. Siren also manages to brilliantly explore issues of sexuality and consent, as well as an American military-industrial complex and political system that treats sentient creatures, including human-mermaid hybrids, as if they are monstrous others to be dissected and/or locked up. Folding in so many levels of social commentary along with the fantastical story, Siren strikes a perfect balance between a mermaid fairy tale and reality. I had the opportunity to chat with Siren creators Emily Whitesell and Eric Wald over email about their mer-mazing project.

BGN (Sezin Koehler) When I was a little girl (and sometimes now, truth be told), I used to pray I’d transform into a mermaid. What’s your relationship with mermaids? How did that shape Siren?

Eric Wald (via email): I think a lot of people have that desire, though hopefully our painful transformations don’t scare people off from that dream. For me, it really came from a fascination with and fear of the ocean itself. We know so little about what’s really down there. It’s such a beautiful and unforgiving place. I was intrigued by the possibility of an intelligent species that we don’t know about and how tough they’d have to be to survive down there. I also loved that mermaid myths exist in so many cultures. They’re truly a global phenomenon, so it was exciting to tap into that and give it our own unique spin.

BGN: Which you do, and marvelously! I’ve never seen such realistic mermaids as this. Was it also always the plan to have such layered and nuanced social justice and environmentalist messages in the show?

Emily Whitesell (via email): The environmental aspect was definitely there from the beginning. In the pilot, the reason Ryn and Donna are forced closer to the surface is due to dwindling food resources. It felt like a really natural “why now” for the series. And the show was always going to be about this collision of species. But I’d say the social justice element has evolved quite a bit more, especially in Season 2 as we brought more merms onto land and introduced the hybrid characters. We try to never be too heavy-handed with our themes — instead, we always focus on telling a compelling, entertaining, fun story. But these ideas you mentioned hopefully give Siren an added relevance and depth.

BGN: They certainly do. The second season finale has some terrifying parallels with what’s going on at the southern American border, including American citizens being rounded up. Why was it important for you to put this particular mirror up to current events?

Whitesell: We’ve always been interested in what would happen if the secret of mermaids got out, and the season finale was our chance to explore that. The hybrids have lived in fear as this hidden population, and it seemed natural to see that fear play out. And yes, unfortunately, it doesn’t seem too far removed from reality these days.

BGN: Was the focus on a racial and ethnically diverse group of mermaids as well as human cast done intentionally?

Wald: From the outset, this was definitely a priority for Freeform. Ultimately, I think it makes the show feel more modern and relatable. Siren is really popular around the world, so representation and inclusion are big priorities — and that goes for our background extras as well. Ultimately, our actors are so good, that I just get lost in their characters.

BGN: I absolutely agree. And how wonderful to hear Siren is a hit around the world as well. I’m curious about how you pitched a pansexual mermaid in a relationship with a human couple to Disney. What were the first responses?

Whitesell: They were aware of that direction early on and honestly never really bumped on it. It was more a matter of when the relationship would be consummated. They wanted to make sure it felt earned, and the mid-season finale seemed like the right moment, as Ben, Ryn, and Maddie were about to head off on this dangerous mission and the uncertainty of what would happen. Having a non-human character, who doesn’t have the same preconceptions about love that we do, was a natural way to explore these notions. Ryn is very pure and non-judgmental. Ben is love. Maddie is love.

BGN: That is so beautiful. *Sigh* Can you tell us a bit about how the Siren worldbuilding began? Now you are also developing the human-mer hybrids and their society on land. Where do you see it going?

Wald: We’ve always tried to keep our mythology grounded in reality. The question we always ask is, “What would it look like if this really happened?” Our goal is to go deep with our world-building rather than broad. So, no werewolf mermaids, no underwater unicorns. But, to really explore the biology and sociology of our merms. What does pregnancy look like for them? How does the siren song work? What are the power dynamics within the matriarchy?

BGN: I was so thrilled to hear Siren has been renewed for a third season. Congratulations! So well deserved. Can you tell us some of what we might expect from the next season? Do you already have a story arc for multiple seasons in mind?

Wald: Thank you! It’s been really great to see how fans have embraced the show and the characters. We’re opening with a bang for Season 3 as we introduce a major new antagonist. And of course, we left Season 2 with Ryn’s baby implanted in the hybrid surrogate. So that becomes an important storyline as well. There’s also the emotional fall-out of the decision Ben made in the season finale and how that will affect our throuple. We have general arcs in mind for where the characters are going long term, but it’s important to be flexible and open to those surprises we find along the way. If a really interesting storyline presents itself, we’ll go down that road to see where it leads.

BGN: I seriously can’t wait. Many thanks for taking the time to chat about Siren with me. I’ll be on pins and needles until the third season opener this fall.