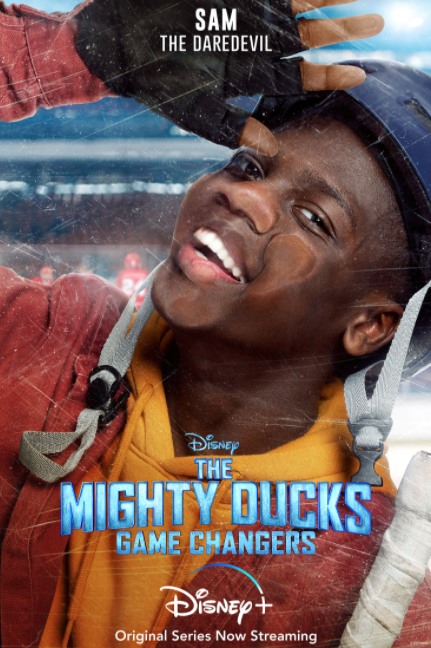 The 1992 film The Mighty Ducks is back as a 10-episode series set in modern day Minnesota. The feel-good pilot is delightful, with something for everyone. BGN spoke with De’Jon (DJ) Watts who plays Sam in the Disney+ series.

Something special happened when you were working as a background actor on Black Panther. Tell me that story.

So basically I actually went to the set of Black Panther a background performer, but ended up getting bumped up to a featured artist.

How did that happen?

My mom was like, “You better get your behind to the front of the line! You have to stay in front of everybody else. That way they know that you’re serious about what you do.” So after that I ended up getting bumped up to a featured artist. I got a chance to meet Chadwick, may his soul rest in peace. I tell my mom that he’s not dead, he’s with us spiritually. I got a chance to meet Lupita Nyong’o, too.

That’s impressive. For The Mighty Ducks: Game Changers, what was your audition like?

It was actually pretty fast-paced. I got the audition [script], my mom told me to study that night, and we taped it. I ended up getting a call back. I had to fly to LA for that. Funny thing is, I ended up meeting one of the kids who I had no idea was going to book the show. We ended up meeting at the callback, and we both ended up booking the show.

I love that! Did you guys get to audition together? Which kid was it?

We actually did audition together. It was the kid who plays Logan La Rue on the show. At the audition, his mom was like, “if you both book this audition, we can drive you around Vancouver. That way you can see how it is living there.”

That’s a good incentive. Did you already know how to play hockey when you booked the job?

They taught me how to skate in February of last year, so it was like a whole month full of basically skating with skate bootcamp. Very tough, very, very tough. I’d never stepped foot in ice skates or on ice before. I fell as soon as I stepped onto the ice.

Wow! But you got up right?

Yep, and five to ten minutes later, I ended up skating normally, how like everybody else did it, but I didn’t know how to stop,

Stopping, that’s the hard part. And you dance right?

Yes, I actually do.

If you’re a dancer, you can do basically anything.

Yeah, I ended up teaching myself my own version of stopping on skates.

He’s literally the Disney version of me. I’m basically a real live version of him. So, like, Sam is also the reincarnated version of Fulton Reed (Elden Henson) from the original Mighty Ducks, but now, he’s a skateboarder who likes throwing his body into vending machines and trash cans. I actually enjoy doing that.

That’s awesome. When you’re shooting the hockey sequences, is it really hard to learn the choreography?

No, surprisingly, it’s not. They just place us in the right spots, the spots that they want us to be in. When they call action, whatever the play, whatever happens, happens. That’s how it went, most of the time.

I love how much speed you can get on skates. And hockey, it’s all about focus. If you focus on a certain point where you want to hit the puck and just breathe then shoot, it goes in!

I’ve loved Emilio Estevez. He was in the film The Breakfast Club when I was a teenager. What was it like working with him?

Oh my god! He is super nice, like the nicest person you could ever know.

Did you watch the original Mighty Ducks movies in preparation for your role?

All three! I love them. Fulton and Averman are my favorite characters.

What’s the best part about living in Atlanta right now? Because it seems like everything is happening in Atlanta.

I would say the best part of living in Atlanta right now is the vaccinations. More people are getting vaccinated and that’s good.

That’s very important. Are there any things industry-wise that’s good about Atlanta?

They say Atlanta is basically the southeastern Hollywood. I agree with them. There’s a lot of films that are shooting down here, which is great. They actually shot all of the Avengers movies down here.

What’s making you really happy these days and bringing you joy?

If you’re looking for a feel-good series this spring check out De’Jon (DJ) Watts as he lights up the ice as Sam in The Mighty Ducks: Game Changers. New episodes stream Fridays on Disney+. Follow DJ Watts on IG https://www.instagram.com/actordjwatts/

Emilio Estevez Returns and Reprises His Role in ‘The Mighty Ducks: Game Changers’