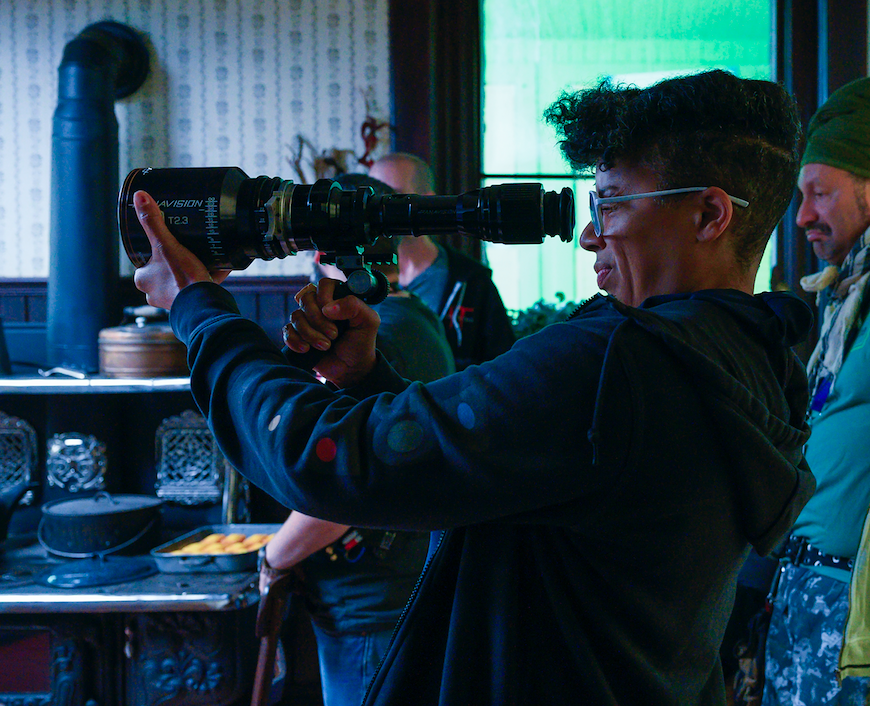 The upcoming Netflix limited series, premiering March 20, stars Octavia Spencer (Madam CJ Walker), Blair Underwood (CJ), and Carmen Ejogo (Addie). The last two episodes of the series are directed by DeMane Davis, and she has a great story. She directed a couple of indie films that garnered her major Sundance attention, and then — as often happens in Hollywood (especially to women) nothing. She chucked her dream and went back to Boston to work in the advertising game. Several years later, Ava DuVernay came calling — and now here she is living her directing dreams! Davis directed episodic TV such as Queen Sugar, You, How to Get Away with Murder, Station 19, and more. Davis has never given up, and her work with Ava is a true testament of women supporting and uplifting other women.

BGN exclusively sat down with the filmmaker to discuss her work on Self Made and how this series will make an impact on female entrepreneurship.

You directed the last two episodes of the Madam CJ Walker series Self Made: Inspired by the Life of Madam C.J. Walker. How did you get attached to this project?

Well, when I heard about it, I was like, “I have to be a part of it.” Really what drove me to it is I knew about Madam CJ Walker obviously from Black History Month. In elementary school, you learn about her. I was just incredibly taken with her and her achievements and impressed. I worked in a hair salon when I was 12; that was my very first job. I used to take out roller sets and sweep up hair and get people lunches and stuff like that. Then later, I was a receptionist at a hair salon in Boston. I would go around and give people magazines when they were sitting under the dryers and ask them, “Can I get you some water?” I remember trying to make it like a super upscale experience. I would make stylebooks so that people could look at different haircuts and stuff and pick out what they wanted.

The thing that I loved the most is when a woman walked into that salon and she was sort of like wearing a scarf and hunched a little bit head down. And then that transformation when she exited. Do you know what I mean? It was that she made her own wind. That always really stuck with me. When I heard that this was going to be a series, I was like, “I have to be on it. I have to be on it.” I’m a super believer in the power of positive thoughts. So I was like, “I’m going to do it. I’m going to be a part of it.” I told my agent and a friend of mine Shaz Bennett, female director, fantastic person. She knew Elle Johnson. Elle called me in. I had a meeting with Elle, Janine, and Nicole. I put together a book and I said, “I just have to be a part of this project.” And at the meeting, it went extremely well.

You worked obviously with Octavia Spencer, who plays the title character, and she’s also a producer on this series. Does that change the dynamic at all as you being a director working with an actor-producer?

No. She has a bigger stake in it, and she cares more about it. I just love it when people care, and when they’re passionate, they’re really active. That’s what she was. We would all talk about this woman like she’s here, and we would always say we’ve got to honor her. One of the things that was pretty amazing is that we had a very diverse crew. We had a lot of women and a lot of women of color. A lot of Black women, which was great. Miss Octavia, as I call her, has her own team, who did their thing.

As far as department heads and crew in every department who could have taken other jobs: Because this was four episodes, you’re talking about people who could have taken jobs that were eight episodes or more. They turned down those jobs to do this because they said, as soon as they heard that this was happening, “I want to be a part of it. I want to tell her story. I want to honor her.” And that’s just a beautiful thing. So you’re already working with people who are totally passionate, at the service of telling the story. That was amazing.

The great-great-granddaughter of Madam CJ Walker, A’Lelia Bundles, also worked on this film with you and your team. In what capacity did she navigate any of the scenes with you as a director?

She visited the set, and I had the job of meeting her. We just kneeled at her feet, to be honest with you. You’re talking about a woman who is the keeper of the light, literally; who told Madam CJ Walker’s story, authored it, and continues to this day to tell her story and watches over her legacy. She also grew up with Madam CJ Walker and played with her. She mentioned one time how she wore a necklace of hers and lost it. So when she showed up on set, everyone just surrounded her with love and adoration. We were just so grateful, and really just thanked her for writing the book and the blueprint for us to go off. She seemed very happy. She was very engaged.

I did look to her a couple of times [while we were shooting], and she was smiling and was totally into it. Her hair is ridiculous, by the way. So gorgeous. I remember when I first saw her, I saw her from behind at the lunch table. She was sitting with the line producer. I was like, “Look at this woman’s hair. It’s gorgeous.” Then I got closer I was like, “Oh my God, Ms. Bundles is here!” She’s really spectacular.

Were there any particular scenes or moments while filming that resonated with you the most?

I loved all the scenes with Miss Octavia and Blair Underwood. They had such incredible chemistry, and they had a lot of fun doing the scenes, too. I just could have gone on and on. I felt so lucky to get to make arguments in Episode 3, and him coming in the end, getting on bended knee, and her being like, “No.” That was really incredible there. I got chills a lot of times. Also Kevin Carroll, that whole scene with him and Madam, I mean those are real tears. You’re talking to actors who are breathing life into the material and embodying it and giving you real emotions that brought a lot of the crew to tears, just watching them. So those are probably the biggest moments for me really experiencing that. The things that moved them both as actors and people is what I remember most.

What do you hope viewers will take away from watching this series?

I really hope that people will have the reaction that you had, which makes me so happy, which, as an entrepreneur, you are inspired by it and hopefully you can appreciate what you’ve done already and what you will do. I want there to be some sort of statistics the day before it airs and then after to see how many women start businesses and products. That’s really what I want to see. I’m thrilled for young women and young girls, Black women and women of color, to take a look at it and to know that they can do whatever it is that they want to do. I also want people to understand that the hardships that we have in this lifetime — respect that they’re hard. But if you look at what Madam achieved — being the daughter of slaves, married at 14, widowed at 19, single parent going door to door with products at a time when they were still lynching Black people, buying property in Pittsburgh, Denver, St. Louis, Indianapolis — she created an empire.

I’m excited for people to see it and be inspired. To see the things that she overcame. To know: “I can create whatever it is that I want to create.” She didn’t take no for an answer. And she kept going. Then there’s the philanthropy piece, which I think is huge in terms of what she provided for women, giving them businesses, giving them agency, encouraging them to live out their dreams, as well as,having different causes that she supported, like the anti-lynching bill. She was at the ready to march or donate at any at any time, which is exactly what we have to do right now. I think it’s what women need to see today.