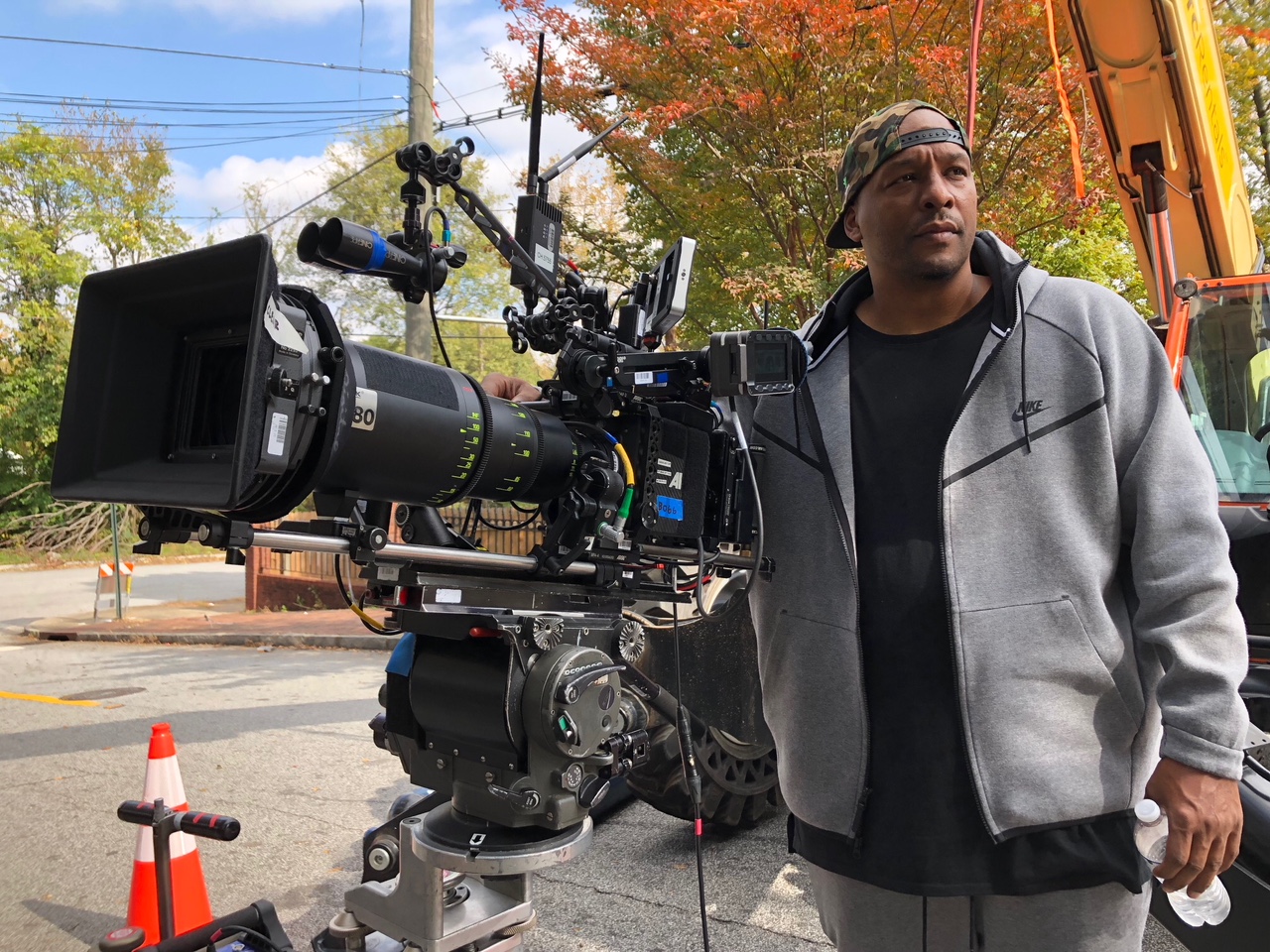 “people don’t know my work. I think they soon will, but one of the biggest things for me was, I’m a very, very serious filmmaker. From things like [my film] Supremacy to even dabbling around in the horror world, I really just love film.” -Deon Taylor

He’s never been to film school, has never formally studied writing. He initially thought he’d make a living in the NBA, but now owns his own production company called Hidden Empire Film Group. If you haven’t heard of Deon Taylor yet, you soon will. He’s been breathing new life into the horror genre for Black folk since 2007 as an entirely self-taught filmmaker.

Some may remember Taylor for directing the horror series Nite Tales for BET, but it was 2016’s Meet The Blacks—a spoof of the wildly popular 2013 film The Purge—that exposed more audiences to his work than his previous, limited-release films permitted.

“The Black family is getting out of Chicago in hopes of a better life. After Carl Black (Mike Epps) recently came into some unexpected fund$. Carl takes his family and leaves the hustling lifestyle behind for something better. Carl, his wife Lorena (Zulay Henao), son Carls Jr., daughter Allie Black (Bresha Webb) and cousin Cronut (Lil Duval) pack up and move to Beverly Hills. Turns out, Carl couldn’t have picked a worse time to move. They arrive right around the time of the annual purge, when all crime is legal for twelve hours.”

Meet The Blacks was a shoestring-budget independent horror-comedy that handily made quadruple its $900,000 budget. The film had a modest opening (by domestic box office standards), but it indicated that Taylor was capturing something that’s still surreal for movie-going audiences to see: an entire Black family survive a horror film.

Even more exceptionally, the entire Black family thrived with quick wit and lots of humor.

The premise “creates its own fan base, creates its own awareness and ends up, ultimately shifting my paradigm of my life as a filmmaker,” Taylor said. “That little movie has now opened the door for me to do more, bigger films, and to express who I am as a filmmaker even better.”

The success of Meet The Blacks enabled Taylor to have significantly more freedom with its upcoming sequel.

“I get really excited because this is the one where I said, ‘Okay Deon, you didn’t have an opportunity to shoot this movie the way you wanted to the first time, you didn’t get to use the cameras that you wanted the first time, you didn’t really give the audience everything you wanted to give them for budgetary reasons and time restraints,’” Taylor said. “So on this one I said, ‘Alright I’m finna come out guns blazing. Ima go shoot this movie the way it’s supposed to have been shot, I’m gonna deliver to the fan base, something gigantic that they can actually love and have and put on their shelves forever.’”

That “something gigantic” is The House Next Door, which began filming early October in Atlanta, and will be more horror than comedy.

“After surviving a night of terror and becoming a best selling author, overstressed Carl Black moves his family back to his childhood home where he hopes to work in peace and quiet on a new book that he owes his publisher. But when his quirky neighborhood becomes host to a mysteriously extravagant pimp, Carl’s work is interrupted after his dead-beat cousin becomes convinced the new neighbor is actually a vampire and is trying to steal Carl’s entire family away. Carl is forced to team up with an oddball cast of neighborhood characters as they take the fight to the vampire pimp in a hilarious battle for Carl’s family… and the future of his old hood.”

Taylor saw an opportunity to work towards two of his goals as a filmmaker: 1) continue telling the truth the best way he knows and 2) create opportunities for collaboration between—and elevation of—other Black creatives.

The House Next Door finds Mike Epps reprising his role as Carl Black, and Katt Williams joins the cast as the vampire pimp next door.

“What’s interesting about this movie is…we’ve all known Mike Epps and Katt Williams and Kevin Hart, we’ve heard those rumblings, we know what that is: ‘Oh they don’t work together.’ I heard that for the last two years … and what I think is really special with this movie is that, whatever the differences were, whatever the public said, the fact of the matter is that Mike Epps and Katt Williams have come together to do something really, really funny and special together—and they’ve opened up the door for Lil Duval and Michael Blackson and Bresha Webb and all of the other comedians to ride the wave with them, which is not common.”

He pays a lot of credit to Friday, wherein Ice Cube and some of the executives took a chance on Mike Epps and a few other unknowns at the time. “I wanted to kinda reinvent that world, you know what I mean? And also make Mike and Katt, as executives and businessmen, I wanted to push for them to do this, because I think if they can do it, then on the highest level, maybe one day we can get a Jamie Foxx, Will Smith movie, right? Maybe we can get a Will Smith, Denzel Washington movie.”

The truth of Taylor’s observations, experiences, and hopes about the world continue to be told in The House Next Door through Carl, and in some ways with Carl’s experiences running parallel to Taylor’s own.

“My life, I grew up [in a] very, very tough childhood. I came from Gary, Indiana, seen a lot of different things. Raised very, very poor and basketball for me was a way out. Nobody in my family had ever went to college, the same old story that you hear all the time and basketball was my way out. So my entire life I’m like, NBA, NBA, NBA you know what I mean? Whatever it is—you do the posters and you go to the camps and you’re dunking and shooting and that’s your whole life and you love it, and ultimately, that’s what I thought I would be. And then you find yourself looking in the mirror and life does something different to you where you are now doing something else, you know? And for me, fortunately, I’ve been extremely blessed to have found film…learned it on my own, through my heart, and now I can say I love film as much as I love basketball. Like damn, how did that happen?”

Just as Taylor’s life didn’t take him down the path he expected, the path that Taylor has Carl going down in House Next Door is quite different from the first movie. “He went from this comedic funny guy in the first one who was hustling people, trying to figure it out, then he found the grand hustle which was like, ‘Oh shit, I can write a book. I got them with this book!’” Taylor said. “But the reality is, that’s not his calling. So we’ll find out…what his calling is.”

At its heart, Meet The Blacks and The House Next Door are stories about a person of color trying to find his calling in life while also providing for his family. This October, he’s started realizing that calling for Carl Black, just as he did for himself.

Keep an eye out for Deon Taylor’s The House Next Door, and in the meantime, go watch (or re-watch) Meet The Blacks on Netflix.