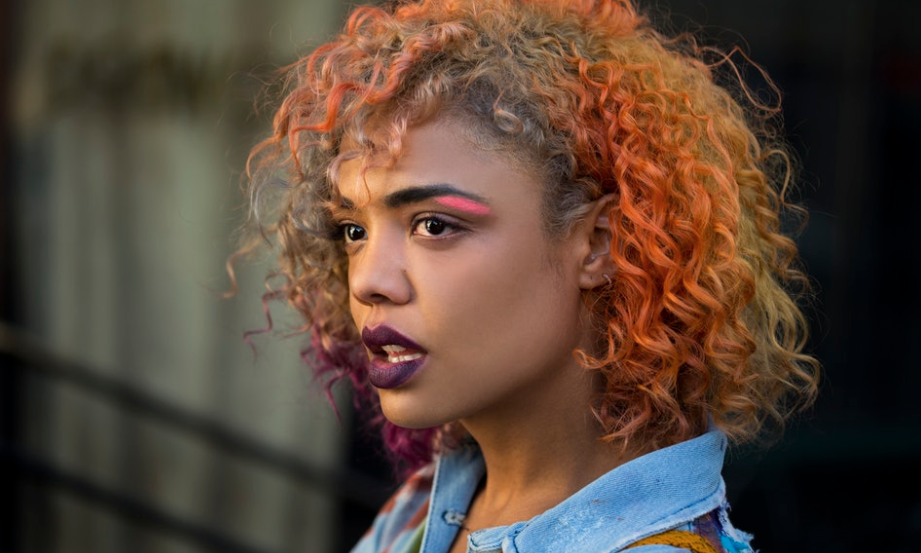 There’s been a lot of discussion of the character Detroit (Tessa Thompson) from director Boots Riley’s wonderful new film Sorry to Bother You. Riley himself has jumped into the discussion to give his own explanation of the character. I’m generally not down with storytellers explaining themselves. The point of art — is being open to interpretation and taking on a life of its own outside of the creator’s understanding and imagination. When the writer says “this is who she is”, it’s hard to disagree. I’m going to do it anyway.

To me, Detroit represents a critique of the “wokest” amongst us, a modern-day radical Afrocentric parody character seen on most 90s shows. Detroit, played by Tessa Thompson, has a schedule like most creatives: she has a day job to pay bills but is mentally and emotionally invested in her art. Two of her scenes stand out as moments where Riley seems to criticize the average revolutionary.

First is the brilliant camera and sound work of Cassius “Cash” Green (Lakeith Stanfield) zoning in and out, reaching for the blunt that his girlfriend Detroit is holding, while she explains how her art explores “Africa.” It’s a moment of magical realism that allows Riley to ask the audience pointed questions. In watching this scene, Riley’s asking us some rhetorical questions: isn’t this what “radical” Black Americans often do, mythicize the “motherland” and act as if Africa’s only point of pride is pre-European contact? Isn’t this what Black Americans often do, dutifully nod in and out about the importance of Africa but not actually engage with what that means? Isn’t the average non-African not interested in Africa unless it’s to pity or exploit (“you want some of this?” Detroit asks, gesturing to the joint in her hand). Of course, there’s also the dynamics of her boyfriend zoning out when she’s sharing something she’s obviously passionate about, but this isn’t a post about gender dynamics.

Riley keeps up this line of questioning at Detroit’s art show. When Cash comes to Detroit’s show, he almost leaves until he hears a British-accented voice discussing the pieces. The camera makes the audience turn with him to see Detroit: crisp pantsuit on, hair in a bun, smiling with an art dealer, using a white voice (as opposed to The White Voice that Cash employs) and wearing none of the bold, protest-art clothes and jewelry that we’ve seen her in before. She looks and sounds like everything she has derided Cash for. I expected an immediate accusation of selling out, but Cash simply congratulated her. When directors take the road less traveled by, it always makes the viewer work harder. Why doesn’t Cash call her out? Is there a certain level of hypocrisy that’s inevitable from even the most radical of revolutionaries? I don’t have a clear answer to that question — mostly because I was so tuned into the second half of the scene.

Detroit’s performance is where Riley’s criticism seems most pointed. She starts on stage in a leather crop-top and underwear designed to look like a raised middle finger. Then she instructs the audience to throw phone batteries at her (presumably because our phones are just one of the tools that the tech industry uses against us) and balloons filled with sheep’s blood (probably a Biblical reference to a sacrificial lamb, but I haven’t puzzled this out quite yet) while she recites a poem throughout the assault. We watch as her body flinches and voice falters, then straightens and rallies, while the batteries hit and the stage bleeds red from the balloons. Cash soon yells for the show to stop. She tells him to leave before returning to the stage and putting on a police helmet to shield her head from upcoming attacks. 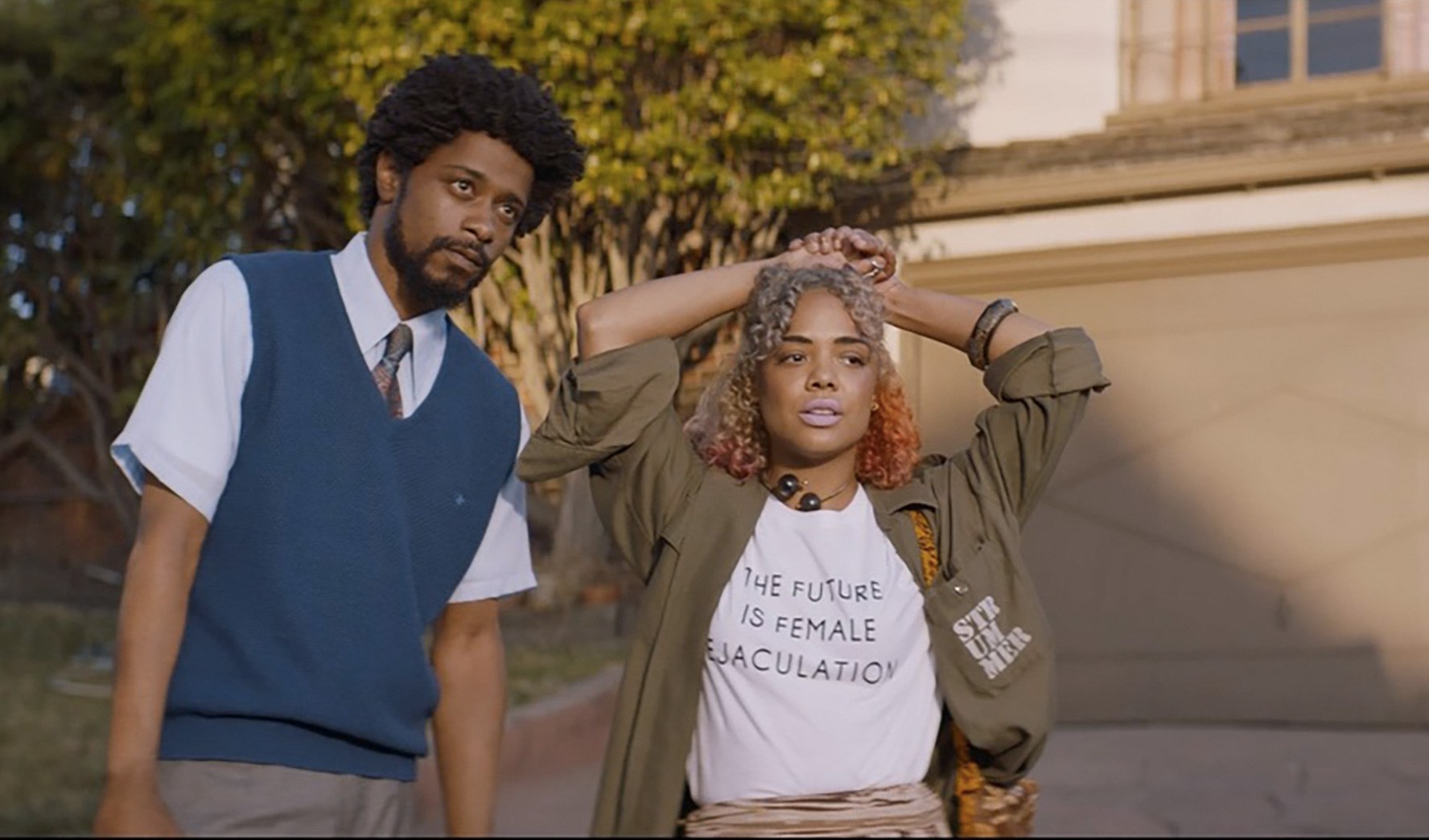 To me, this seems a sneering dismissal of “wokeness.” More specifically, it’s poking at the self-flagellating ways that people perform revolution solely to soothe their own egos and self-perception. Skipping the art-for-art’s-sake vs art-as-rallying-point debate, Detroit’s performance fell flat. She deliberately put herself in harm’s way and for what? What has her audience learned? Some uneasiness and horror at their ability to hurt someone else?

What is Detroit saying? Besides some bluster that she is “strong” enough to withstand the blood and batteries hurled against her while she repeats the same message over and over? Standing on an elevated platform, partially shielded by a police helmet (arguably one of her main enemies in the real world as a Black woman and as a striking worker) Detroit’s art is supposed to show her as a shining example of endurance and commitment. But to what end? Withstanding self-created torment, in a relatively controlled environment, is potentially therapeutic. That’s an action that has meaning for Detroit, but no one else. Endurance, commitment, discipline, and focus are admirable qualities. Yes, they’re necessary for resisting entrenched systemic barriers. But demonstrating them in an artificial manner makes them look contrived like she’s playing dress-up. And it’s inconsistent because Detroit seems to be really bout it, bout it with the strike.

Let me be clear. I don’t believe Detroit is fake. I don’t think she’s anything other than fully committed to the struggle. And Riley isn’t asking us to dislike or disbelieve Detroit. Or for us to stop claiming to be woke. It’s more subtle than that.

I think he’s asking, what do we mean when we have solidarity marches? When we photo campaign? When we hashtag? When we change our profile pictures? When we wear T-shirts with the African continent colored in red, green, and black? Do we mean it? Or are we like Detroit at her show, playing the role, loudly insisting on our authenticity, and just not realizing how fake it all looks?

Think about the recent movement to ban straws in restaurants. People are currently celebrating Starbucks’ pledge to phase out straws from its stores, forgetting that eliminating straws hurts disabled people and conveniently ignoring that the company’s carbon footprint from production grossly outweighs any benefit from the “no straw” movement. Think of the way so many people will happily chime in on a hashtag, post an “I Stand With” status, or add a filter to their profile pictures, but cannot be found when it is time to volunteer. Think of solidarity marches: careful routes, often with police escorts, that resist nothing and change nothing but nevertheless leave participants feeling “empowered.” Moments like these, where people proudly pat themselves on the back for their unfailing commitment to the “cause”, ring hollow especially when these are the only actions that some people take. Detroit, who is striking, who is protesting, who is collaborating with the other strikers, is miles more consistent than the social-media-only or faux social justice warrior. So if even she can be found falsely padding her own image as a revolutionary, then how hollow are some of our actions?