A Wrinkle in Time was released at the end of February and breathed its magic all over the country for the next few months. If you saw the film, you are familiar with the “magic,” the film adaptation of the 1963 novel of the same name by Madeleine L’Engle. The book is about a nerdy, introverted girl who searches the universe to save her family and it captured the hearts of generations. In the hands of director Ava DuVernay, however, the book became much more—a space where the world can see a girl of color living and loving and being magical on her own terms.

BGN spoke with Ava DuVernay while she was at Cannes this past week. She was promoting the re-release of the film for Mother’s Day weekend and reiterating the importance of the positive depiction of kids of color in the film, especially girls. She spoke about how girls of color, “are limited to traumatic imagery. Even if I look at something like The Beasts of the Southern Wild…it’s a lot of chaos, tension. And that’s what, you know, [as] an American audience American cinema serves us.” She’s touching on a sore spot in which the depiction of black girlhood in Hollywood is wrought with struggle, violence. Very little of that girlhood innocence makes it into the film. Even the modern update of Annie starring Jamie Fox and Quevenzhane Wallis was built on the hardship of living life as an orphan.

But, Wrinkle in different, DuVernay was determined to make it different. She set out to make a film where the black girl has fun, minus that usual hardship. She said, “Our girls deserve to traipse across the universe and have fun too.” So, making Meg a 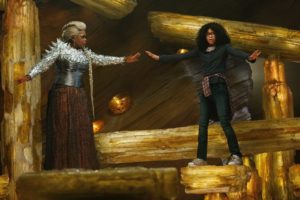 kid of color, having an adventure in such a vibrant setting that is the Wrinkle storyworld not only provides a change of tropes for black girls, it’s a chance for American families to see a black girl living her best life in the most imaginative setting possible.

A Wrinkle in Time is releasing on about 1800 screens across the country for Mother’s Day weekend. Mothers, daughters, fathers, and sons need to gather themselves together and go witness the uplifting experience before it leaves theaters for good. See your local theater’s showtimes for more details.