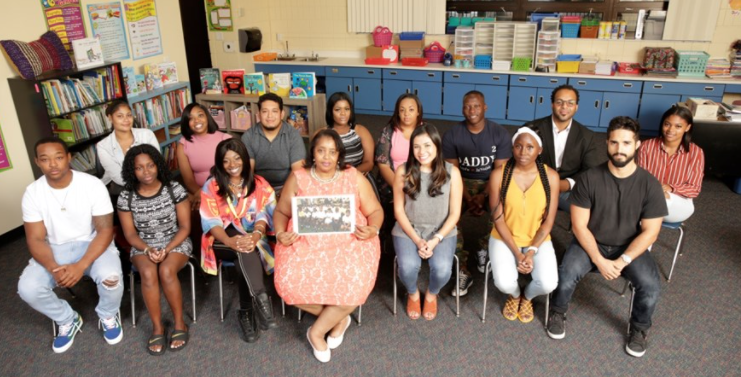 How about having your image indelibly printed in the media forever on that date because you were in the same room as President George W. Bush when he was informed the Twin Towers were attacked by terrorists?

The documentary 9/11 Kids, directed by Elizabeth St. Phillip, follows the stories of the children who were in the second-grade classroom at Emma E. Booker Elementary School in Sarasota, Florida, that George W. Bush was visiting when he received the news that the World Trade Center had been attacked. Today, those kids are in their 20s and their lives have taken many different trajectories, which the film explores as it dives deeper into topics of inequality, discrimination, and economic struggle over the last 20 years.

In a phone interview with director Elizabeth St. Philip, BGN sat down to discuss her approach to making this documentary and the impact it had both on her and the trajectory this story took shortly after she started filming.

The idea for 9/11 Kids was actually from the co-producer and creator Steve Gamester. He had always wondered what happened to the school kids after the President George Bush incident. And as it turned out, he reached out to me to direct and co-produce. I just thought it was a fantastic idea.  I remember 9/11 quite well because I was a producer working in a newsroom the day it happened. It was just unbelievable. People at the time believed this was the beginning of World War III, and, as well I remember, the image of George W. Bush in the class and the little kids that were there was just such a surreal moment. The idea was that we would check in on them 20 years later, to find out how they’re doing, what their memories were of the day, but also what they’re doing right now with their lives. It just struck me as a fantastic idea. So, that’s how it all got started.

I honestly wasn’t expecting to see how this documentary would manifest. It felt more inspirational than simply just an archive of historic events. What was the intent for you during the filmmaking process?

We wanted to check in on these kids just to find out where they were now and what they were doing, as well as their memories of that event as a starting point. We also wanted to know what they thought about what was happening now in the world, sort of present-day America post-9/11. So it was a bit of a journey for all of us. In the beginning, when we talked, they had very vivid memories of that day. They were so young; they were 6 and 7 [years old]. It was just an exciting day, and it was a blast he was coming. That was their initial memory of it. And then, obviously, tragedy occurred, and they started to learn about words like terrorism and death. The trauma of 9/11 didn’t actually stay with them. They remember it, they know that they’re a part of history, but for them, they’re dealing with issues in their own lives today.

So after we started with the numbers of 9/11, it was really important for us to find out what they think of their lives and what was happening in America and how it resonated with them. We found very quickly when talking to them. One woman we’re talking about, Natalia — she’s a young mother. She’s a businesswoman, and she has a daycare. Her brother, who was a very gifted athlete and had scholarship potential, was shot by police. So, that was just one story, and obviously that resonates so much with all of us right now.

Did you and your team reach out to President Bush or his team at all to recall the events of this day?  Or was this just about the kids?

We reached out to President Bush several times. And he had hoped that he would be part of the documentary. He declined, at the time; he had a new grandchild and he wasn’t really doing any interviews of any sort. At least when we were filming. But in the end, I think in some ways it worked out better because I think if we had President Bush, it would have pulled focus away from the kids a bit. This way it’s just them telling their stories. So it’s really cool that it’s from their perspective.

What do you hope audiences gain from this film?

Well, ultimately, there’s a great sense of empathy for all the characters. I hope they feel for them, and I hope that they wish them well after hearing their stories and where they come from. And to acknowledge that this is America; this is the next generation of kids that reflect what is happening in America. I just want people to have compassion for them and empathy for them. I want people to cheer for them and wish them well. I think when you don’t know people from different communities, it’s easy to make assumptions about what kind of people they are. I think we get to know people and [learn] that they’re very much like all of us. We all aspire to achieve certain things in life. We want to do better for our families, we want to choose things for ourselves; just recognizing how we’re all similar. I just want people to connect with these kids. I think they’re very special. I think their stories are very poignant. And I hope that people who watch the documentary feel that as well, and are touched by their stories.