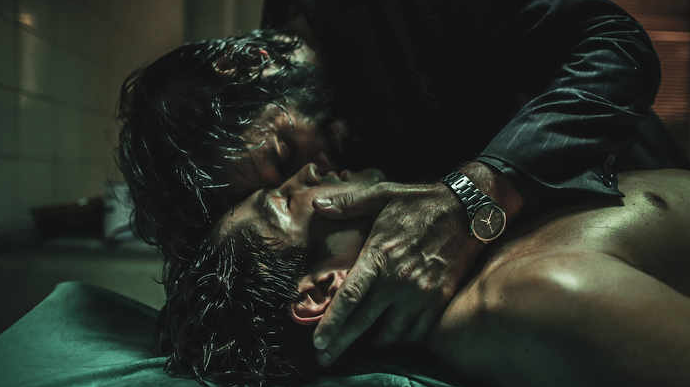 Amazon Prime Video is stepping up its game with new international material.

One of which is its first Brazilian scripted eight-episode original series, DOM (2021). While the series’ original tongue is in Portuguese, Prime has added subtitles and dubbed versions for audiences. The Brazilian creator Breno Silveira’s work gives a unique, if dark, perspective that reaches the widest audiences with his incredible talent for storytelling. DOM is inspired by the notorious true story of a father and son battling the drug wars in Rio. DOM touches on the areas of human life that many would prefer to ignore. The series positions a father between being his son’s hero and helping him fight his addiction and his moral obligations for a more civilized society, and poses the question, when do you finally let go of the ideals and face reality?

DOM as it is reimagined by its creator is a story that is loosely inspired by true events, and some elements were created for the sole purpose of telling an engaging narrative. While the series focuses on two characters at arms, the world is rounded by secondary characters like Pedros best friend and lovers. The series follows Victor Dantas (Flávio Tolezani), a strong father who loves his children unconditionally. Victor is a police officer who makes it his life’s mission to fight the narcotic war in Brazil. In an unfortunate turn of events, his beloved son Pedro Dom (Gabriel Leone), who is a selfish teen, is addicted to the very drugs his father works so hard to get rid of. Both of these men find themselves on opposite sides of a brutal struggle that challenges their strength, empathy, reason, and family values.

Throughout the series, and with every passing episode, Victor’s path becomes ever more clear. His past struggles, his loves, his families are all revealed and sheds light on what he had to overcome to give his family a better life. This might be why this crime drama works so well. Victor, a loving father, stops at nothing to be as supportive as he can be. While sacrificing everything for his country and his family, a question that never stops coming to mind is, when is sacrificing oneself for everyone else going to be enough? He is a police officer, a father, and a lover each and every day of his life, giving more than he gets and watching his life fall into pieces. He tries to protect his son Pedro to his own detriment. He gives money, his time, asks for favors from others to help his son, and all these yielding results that anyone would be unsatisfied with, but not Victor. He continues to see the best in his son.

While the series follows the hero of the story Victor and his incorruptible morals, the point of view shifts to Pedro, who proves to be the polar opposite to his father. Pedro’s introduction is set in a club where he is high on drugs. His father is attempting to rescue him from the bad decisions he has made, especially from his addiction to cocaine. It isn’t too long after his rescue that Pedro relapses and sells his father’s laptop, the only thing that gave him solace, for drugs. Pedro’s addiction to drugs and alcohol is what ultimately drives his character. His constant desires to be free from the demons that hunt him allows Pedro to seem more noble than he is. Unable to break free on his own, Pedro’s father steps in at every instance to protect his boy. With every crime and every kindness, Pedro loses sympathy for his constant failure through the series.

A feature of the series that is brought up are the effects of social and economic conditions and how it can have an effect on a child’s upbringing. Lico (Ramon Francisco), Pedro’s best friend, more than any other character makes this painstakingly clear. Victor is convinced that Pedro’s choices are partly influenced by Lico. In an effectively beautiful scene, Elizete (Flávia Santana) Lico’s mother, is confronted by Victor who wants to know the location of both the teens. Elizete tells him that he hasn’t spoken to his son in a while and is unaware of his current location. Victor, unable to believe her answer, presses her further. Her rebuttal shines a luminous light on the situation. She states, “Your son is not better or worse than mine, but Lico didn’t have a dad. He has never had a chance to study. My son was born and raised in the favela. So, what’s Pedro’s excuse?” The idea that Lico is to blame for Pedro’s bad choices unravels Victor. It is moments like this that compel many to reconsider how we have viewed others for the decisions we had made.

One of the most beautiful aspects of watching a series from other countries is learning about their culture. This includes the good, but it should not come at the expense of learning about the darker sides of it as well. DOM pushes the limits of what an average person is willing to take, and condenses those limits to the purest forms of love for their child. The series begins and closes with brilliant lines about a father feeling like his son is hero, but with every hero, when do you know when you are done being a hero? Through each watching of all eight available episodes, the hero of the show becomes muddled and his incorruptible want to protect his son becomes almost a warning of sorts. How far would you go to protect your children from the world?