Ah Westworld, the show I love to hate. I’m still trying to figure many things out about this show, but episode 7’s title captures the theme of the season. Trompe-l’œil is French for “deceive the eye” (Wikipedia). The Hosts are designed to be optical illusions. The park is an optical illusion. Delos, the entity that owns the park is playing a deeper game. Theresa’s loyalty to the park is an illusion. Maeve’s ability to be controlled is an illusion. The linear nature of the show is an illusion. Bernard’s humanity is an illusion, as is Dr. Ford’s. Nothing here is what it seems and the veil is falling, slowly revealing the inner workings and motives of incredibly shallow people and extremely complex machines.

The best illusion of all is the idea that these two items, the people, and the machines, are different.

And this is the crux of Westworld, isn’t it? If something is created by humans to emulate, imitate, and be human, then what makes them less than that? That is life…unconventional is how it was created, but still life. And Dr. Ford plays god over everything resembling life at the park.

This episode wasn’t a surprise for me. We knew Theresa’s time was up and I’d strongly suspected Bernard was a Host a couple of episodes ago. What did surprise me was the impunity with which Dr. Ford acted. As casually as he destroyed the environment in the part, he destroyed people. Only his creations, the Hosts, are treated with any care and respect. Dr. Ford is very much the epitome of “I brought you in this world and I can take you out,” and apparently, that applied to park employees.

Dr. Ford has no humanity. It’s a wonder he can create Hosts like Bernard at all.

William and Delores…who cares? Seriously, who cares? I guess, I do…slightly because of the whole timeline question, but other than that? Eh.

And Charlotte. Dear Charlotte. She came in prepared to slay a god but I am not sure she truly understood this god’s strength. She set the terms, required the blood sacrifice but her thinking was limited to the figurative corporate ideology unlike Ford for whom the lines of life and death have become blurred in his utopia.

And then there’s Maeve.

“You think I’m scared of death? I’ve done it a million times. I’m f–king great at it. How many times have you died?”

Have I mentioned that I love her? I LOVE her. She has Felix and Sylvester (oh how I cannot STAND Sylvester) completely under her control and all because they cannot kill her…at least, they don’t think they can. To be honest, I don’t know why Sylvester hasn’t just wiped her or reported a malfunction with her coding.

All of which leads us into episode 8 “Trace Decay.” 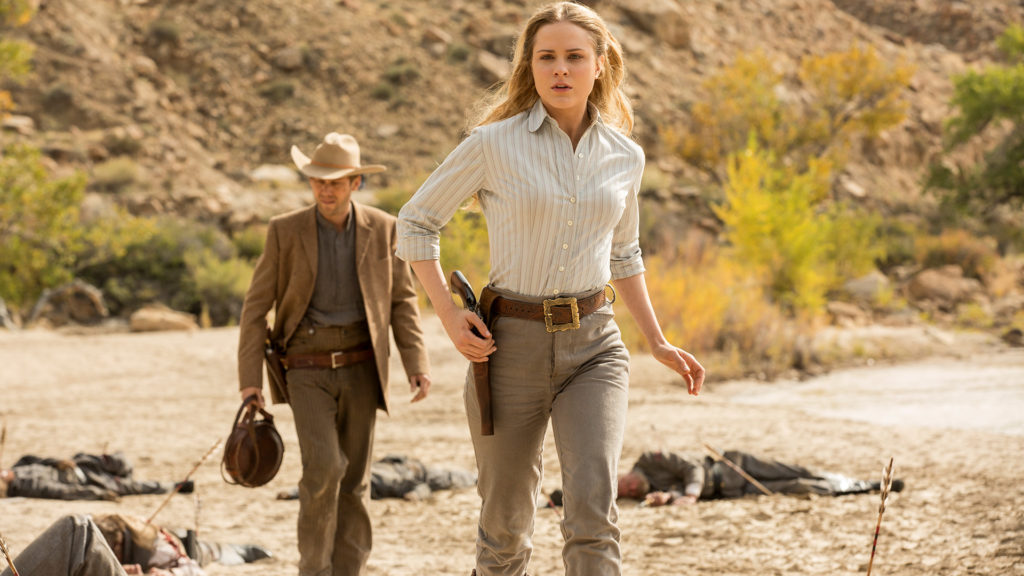 So, I wondered how Ford thought he could get away with Theresa’s murder. Then he sent Bernard to remove all physical evidence of Theresa and Bernard’s relationship and promised to erase his memory of her.

We learn that erasing memories is a common thing in this park. And it is done without consent to keep the Hosts docile…innocent. Submissive and content with their loops. We watched them erase Maeve’s memory when her daughter was murdered by the Man in Black in the past.

But back to this episode, which was…something.

It feels like a bridge episode between exciting acts. I get it…storytelling. It takes time. We need to see Maeve power up as Ford continues exposing his monster and Bernard break his loop. We need to see Ford’s relentless stripping of the Hosts’ humanity and how it causes the Host’s systems to reroute themselves.

Maeve is getting some awesome dialogue, but we all know she’s my hero. Even when they kind of f–k her up, which they kind of did in this episode. But during her conversation with Felix and nasty Sebastian she says:

Funny you should mention that. Parts of me are quite old. There are some elegant formal structures, a kind of recursive beauty, but complex, like two minds arguing with one another. There are things in me, things I was designed to do, that are just out of my reach. They almost seem to be dormant. Who is Arnold?

Maeve is aware of the separate pieces of herself, but the extent to which they are interacting is unknown. But with Delores we see them trying to communicate with each other and possibly failing. This is creating an interesting picture, isn’t it?

The lines between humanity and artificial intelligence become even more blurred with Ford’s and Bernard’s exchange before Bernard’s memory purge.

Ford: I wonder, what do you really feel? After all, in this moment, you are in a unique position. A programmer who knows intimately how the machines work and a machine who knows its own true nature.

Bernard: I understand what I’m made of. How I’m coded but I don’t understand the things that I feel. Are they real? The things I experienced. My wife. The loss of my son.

Ford: Every host needs a backstory, Bernard. You know that. The self is a kind of fiction, for hosts and humans alike. It’s a story we tell ourselves. And every story needs a beginning. Your imagined suffering makes you lifelike.

Bernard: Lifelike, but not alive? Pain only exists in the mind. It’s always imagined. So what’s the difference between my pain and yours? Between you and me?

Ford: This was the very question that consumed Arnold, filled him with guilt, eventually drove him mad. The answer always seemed obvious to me. There is no threshold that makes us greater than the sum of our parts, no inflection point at which we become fully alive. We can’t define consciousness because consciousness does not exist. Humans fancy that there’s something special about the way we perceive the world, and yet we live in loops as tight and as closed as the hosts do, seldom questioning our choices, content, for the most part, to be told what to do next. No, my friend, you’re not missing anything at all.

For Ford, the difference between humans and AI is his ability to control them. Which is really interesting because Ford seeks to make them as complicated as he can, as close to free-range humans, yet he doesn’t want the work of caring for and maintaining emotional beings. He wants to rush off the nuances and subtleties as he pursues them. And when things get too complicated, he shuts them down, turns them off, or, in the cases of Theresa and Elsie, kills them.

Did I mention that Ford is a monster?

It takes a special kind of f–ked up person to create someone in their own image only to torture them until their usefulness is expended.

That brings us to the end of episode 8. There are only two episodes left in this season of Westworld, folks. I’ll admit, I’m excited to see how they wrap up this season. I’ll also admit that I’m glad the season is only ten episodes. I don’t think I could have lasted too much longer.

TaLynn Kel is a writer and an avid participant in the Atlanta cosplay scene. You will find her at various Atlanta conventions in costume and participating on panels about cosplay. She is also a guest writer for Black Girl Nerds, The Establishment, The Anime Complexium, and Huffington Post.

‘What If?’ Interviews: The Watcher is a Marvel Fan Just Like the Rest of Us