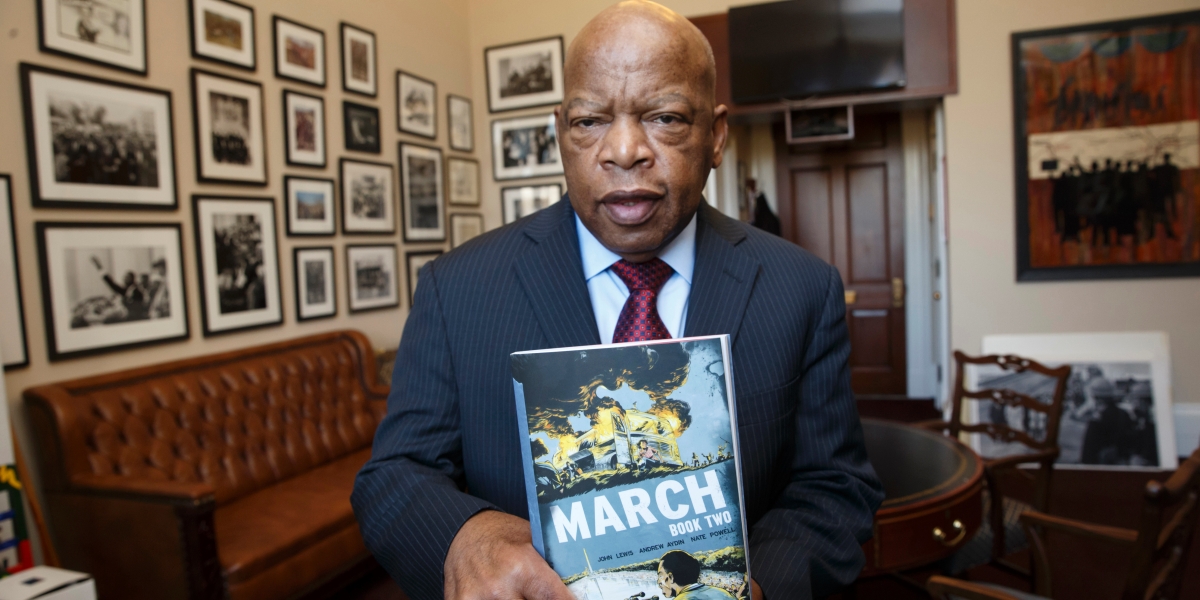 Who: The Honorable John Lewis, U.S. Representative of the 5th Congressional District of Georgia and a long-standing leader of civil and human rights, will discuss the need for civic engagement. Often called “one of the most courageous persons the Civil Rights Movement ever produced,” Congressman Lewis has dedicated his life to protecting human rights, securing civil liberties, and building what he calls “The Beloved Community” in America. Representative Lewis has served as U.S. Representative since he was elected to Congress in November 1986.

Juliana “Jewels” Smith is the creator and writer of (H)afrocentric that features four disgruntled undergrads of color and their adventures at Ronald Reagan University. In 2016, Smith took home the 2016 Glyph Award for Best Writer for her independent four volume series. She was also honored by the African American Library and Museum of Oakland with the first annual Excellence in Comics and Graphic Novels Award. She created (H)afrocentric as a way to challenge students and readers alike about the presumptions around race, class, gender and sexuality through character dialogue. She has given talks about the relationship between comics, humor, racial justice, and gender equity at The Schomburg Center, New York Comic Con, Studio Museum of Harlem and more.

Cooper Union School of Art alumni William Villalongo and Mark Thomas Gibson will discuss Black Pulp!, a traveling exhibition they co-curated that examines the evolving perspectives of Black identity in American culture and history from 1912 to 2016 through rare historical printed media and contemporary art. The exhibition includes works by artists, graphic designers, and publishers in formats ranging from little known comic books to covers for historic books and magazines, to etchings, digital prints, drawings, and media-based works by some of today’s leading artists. Villalongo is a New York-based artist and assistant professor at Cooper. Gibson is a lecturer at Yale School of Art.

Where: The Great Hall in The Foundation Building

The Cooper Union for the Advancement of Science and Art

More: The events are free and open to the public.

The Great Hall of The Cooper Union has stood for more than a century as a bastion of free speech and a witness to the flow of American history and ideas. When the Great Hall first opened, it was the largest public gathering space in New York City. Before they were elected, Presidents Lincoln, Grant, Cleveland, Taft, Theodore Roosevelt and Barack Obama all spoke in the Great Hall. In fact, Abraham Lincoln gave his famous “Right Makes Might” speech that propelled him to the White House there. Leading thinkers and numerous historical figures have held the stage including Frederick Douglass, Susan B. Anthony, Elizabeth Cady Stanton, Mark Twain and more. More recently, groups like the UN, PEN America, the Architectural League of New York and more have held events on its stage.