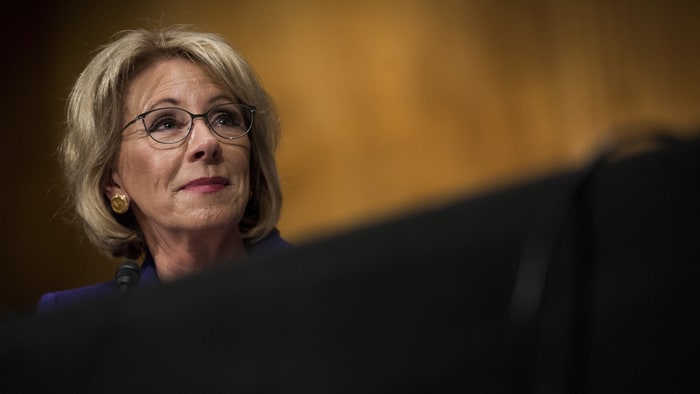 At the time I’m writing this, a state of emergency is being declared in Louisiana due to severe tornado damage.

At the time I’m writing this, a young couple discovers they are going to have a baby and the thin veil of panic clouds their celebration and their joy.

At the time I’m writing this, the mother of an elementary school child with special needs wonders whether or not his future is even considered and she is afraid.

At the time I’m writing this, a state of our union is barreling toward a state of emergency, fully formed as fear. These divided states, the future of this nation and the education is filled with fear.

At the time I’m writing, news has spread that quite possibly the most unqualified, resistant, clueless, worst possible choice has been confirmed to lead the Department of Education. Her name is Betsy DeVos and Miss Betsy has purchased her place into the federal government. Known to have given millions to the Republican party, Betsy DeVos was confirmed by a vote, historic in nature, the tie broken by the vice president in her favor to lead the Department of Education. This is the department she not only does not believe in but has absolutely, positively, unquestionably no experience whatsoever in anything other than her vocal opposition to the existence of the department itself and profit from the crushing debt of student loans.

It is undeniable that this new turn of events has the nation in an uproar. Not only has it been demonstrated that you can buy your way into the White House, it has also been confirmed elected officials cannot be trusted to work in the best interest of the people of America. DeVos has never experienced public education, neither have any of her children, relatives, not one ever having participated in or been a part of public education at the elementary, middle, high school, college or postgraduate level. Her only experience in education is profiting from the student loan crisis millions of Americans face on a daily basis. The trump administration is determined to make itself into a kingmaker, a collection of cronies with complete disregard for life, liberty, or the pursuit of happiness for anyone other than their overwhelmingly white selves. This is the dumbing down of America. This is the beginning of the collapse of our democracy as we know it.

The couple, just discovering the new life they created questions whether or not that world will welcome or hurt their child. Other parents contemplate whether or not homeschooling and private education is even an option for them. It is the world they do not know but will now be in the spotlight due to the uncertainty of the future of the Department of Education, which happens to manage one of the largest budgets in the government – we’re talking financial aid, grants, lunch programs, discrimination protection, the abolishment of affirmative action in education – we are talking disaster.

At a time when people are reminded daily their vote did not count, they are told their voices do not, either. The Department of Education has been placed into the hands of an imbecile who plagiarizes, cannot answer simple questions about administration or policy, and knows nothing about the current system that is been in place since 1980. She is a woman who cannot count, cannot spell and is completely unaware subjects and verbs should agree.

It is important to note there were only two dissents in the Republican Party. Not one member of the Democratic party voted in favor of Devos, but this Republican run Congress has overtaken the political process in favor of private interest and money. Our government is now run by people who have means and ill intent toward the many people of this nation. There is no way to wrap one’s mind around the fact that trump, pence and the cabinet that is currently being established are against every American value. At least the values we hold dear because the values they hold are racist, exclusionary, xenophobic, sexist, and stupid.

What’s even more frightening is the fact that not many people have mentioned the only thing worse than a woman with power, is a woman with perceived power that is actually being controlled by someone else. Knowledge is power and DeVos knows nothing about education, about our children or about what the American people want for their future. trump and his cronies have created an environment of hostility and it has only been two weeks since he has taken office. Not only is the nation in an uproar, but the entire world is looking at the United States and wondering what the hell we got ourselves into. Our position as the strongest, wealthiest, most productive society in the entire world is being jeopardized. Our national security is greatly weakened, not only by these policies but by these attitudes that continue to perpetuate an environment of ill will towards nonwhite mankind. Bigly. This is the dumbing down of America.

While it is difficult to accept the current turn of events, it is not hard to believe at all. We saw this coming. We knew the stakes. The problem is when they told us who they were, the segment of society that we are excluded from, the electoral college having more power than the popular vote, left us in this situation. And this situation is the dismantling of democracy and the foundation of this country being placed in further jeopardy at the hands of a madman who thinks he is king.