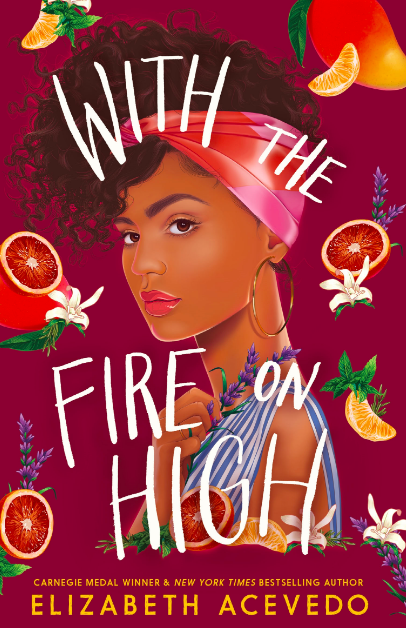 With the Fire on High has the most beautiful hardcover edition of 2019.

Period. And since the design enthusiast in me can’t resist a gorgeous cover, especially featuring a Black girl with some natural curls, I took this book home with me before I even bothered to read the dust jacket.

Surprisingly, the synopsis was even more intriguing than the artwork.

In her second novel, Elizabeth Acevedo continues to deliver stories from the girls we don’t give nearly enough voice to. Emoni Santiago (or “Santi,” as she’s called by some) is a 17-year-old Afro-Latina living in Philly. While school isn’t her strong suit, she more than makes up for it with her immense culinary talent. Her cooking can quite literally bring people to tears, and it’s easy to imagine her becoming a hotshot chef one day. But there’s one thing that’s throwing Emoni’s future career prospects up in the air — little Emma (aka “Babygirl”). While her fellow seniors are prepping for college admissions, Emoni’s just trying to do right by her daughter, dreams be damned.

But don’t get it twisted: she is not here for your pity.

We meet her at the start of the school year, working hard to keep bills paid and her toddler clothed and cared for. This is a girl who knows where her priorities are and does not have time for games or foolishness. She’s been there, done that, as far as the gossip and stares are concerned. But while the ignorance of her classmates may be easy to ignore, the pressures of school and the impending future are less so. With an advisor pushing her in the collegiate direction, a job with less than flexible hours, and an Abuela who she desperately wants to give a break from the childrearing gig, Emoni’s life becomes laser-focused on one overwhelming question: What are you gonna do next?

Naturally, everyone’s got an opinion. Well, everyone except new boy Malachi, who only wants her to give him the time of day long enough for his killer smile to work its magic. While trying to determine if he’s serious enough to give him second thought, Emoni finds her life becoming a series of increasingly hard decisions. From a new culinary arts class being offered at her school, to a study abroad trip to Spain, opportunities are popping up that just seem to scream her name. But after years of putting her own desires aside for her child, does Emoni still have it in her to get her hopes up for something big and wonderful just for herself?

The book is broken up into three parts, each punctuated by one of Emoni’s signature recipes. From the very first ingredients list, Acevedo captures this character’s voice, attitude, and spirit in a way that keeps you rooting for her from start to finish. While it definitely does read with a teenage tone that can require some adjusting to, the inside of Emoni’s head was a comfortable place to be as a reader. That, coupled with the short chapter lengths, kept me breezing steadily through the pages.

The interesting thing about this narrative is that it’s full of very recognizable characters: The supportive grandmother. The unreliable father figure. The annoying baby daddy. The rock-solid best friend. And of course, the sly crush.

Yet despite these familiar beats, Acevedo manages to add her own special “seasoning” to the mix that kept things fresh all the way through. More than anything, her characters felt like people, which is just about the best thing a writer can hope to achieve. Beyond even that, she captures lived experiences in the subtle ways Emoni’s boricua heritage influences her relationship to herself and others, her food, language, and everything in between.

I’ve read a lot of YA in my time, both growing up and as an adult. Often, teenage mothers are barely visible background characters, nothing more than cautionary tales or props to further the image of purity for the main character we’re supposed to care about. It’s refreshing and incredibly necessary to see the way Acevedo has centered this narrative on a character who is ambitious, responsible, mature, dedicated, and appropriately cautious — traits that young mothers are often assumed to be lacking.

It’s also quite a nice change of pace to see themes and explorations of motherhood as a main focus. Pregnancy-centered stories often treat the birth of the baby as the end of the story. In a way, this also subtly signals the end of the individual life of the mother. Where childrearing begins, personal dreams seem to end — at least, as far as YA fiction is typically concerned. Emoni’s struggle to find a way to make her life personally fulfilling while also putting her daughter first is one that goes well beyond just a young adult audience.

Acevedo manages to create a story that at once feels like the unique experience of an individual, but also like the collective stories of thousands of girls who fiction tends to either misrepresent or ignore entirely. I, for one, want more of their stories.