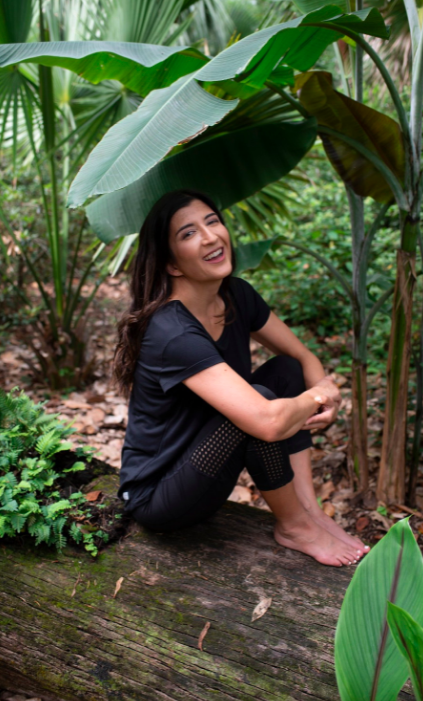 Susanna Barkataki is an author, yoga culture advocate on a mission to create inclusivity and cultural respect in yoga spaces. BGN spoke with Barkataki via Zoom to find out more about how we can mindfully embrace this powerful mind-body-spirit practice.

How long have you been practicing yoga?

My entire life. I came into this divided world that immediately said to me, “You don’t belong.” My family gave me guidance through meditation and mindfulness yoga practices to deal with external oppression and when the world made me feel like I was not enough.

Why has Western yoga has been so pliable and worked so well with capitalism and white dominance?

Yoga has a lot of different components. It’s a philosophy, it’s a moral philosophy, it’s a lifestyle. Historically, there are many different perspectives and ways of practice. There’s a renunciate path; there’s a householder path, which as a parent and as someone who works, is the one I’m on. I’m not up in the mountains renouncing everything.The broadness and universality of yoga makes it adaptable.

Yoga is also an effective technology for the relief of suffering, which also makes it appealing. And, when yoga came to the West, it came with a unique combination of circumstances. It actually came to the West before it ever hit US soil. It came to the West in the Indian yoga teachers who were working under the British Raj. They were working in India for the British, in their households or the palaces of British leadership. And they were developing Yoga into something that would be palatable for the colonial mind. That meant a focus on the body, a focus on physical fitness, which meant basically fitness drills.

No shade on fitness drills. I appreciate fitness, but it’s only one part of what yoga is. Physical fitness focus also came in reaction to the emasculation in particular of Indian men and being told that they were less than and feminine and not enough. So they said, “Oh, well, we’ll prove to you that we can do handstands and we’re so flexible,” with of this full focus on physicality, which was so interesting because in early yoga from thousands of years ago the emphasis was not on physical fitness. The emphasis was on sitting and stillness. The stretches are there to stretch the body to prepare for meditation and to stretch the body after meditation.

But all of this physicality then came to the West, first to the Parliament of World Religions, and didn’t really fully take root in the Northeast because it was a bit too conservative. But it did take root in Hollywood. So you’ve got physical focus matched with the Hollywood starlet lifestyle focused on beauty, physical perfection, bodily autonomy, and sovereignty, all of that dovetailed together to mean that yoga in the West has a body image problem and a white supremacy problem.

So, what inspired you to write your first book, Embrace Yoga’s Roots: Courageous Ways to Deepen Your Yoga Practice?

The book felt like it was maybe at least a decade in coming because I started to realize that the practices I was doing in my house or with my family weren’t what I was seeing in yoga spaces in LA where I lived. I was like, “What is this world that I’m in?” Then as I started to put the pieces of a puzzle together and go to India to study with family members or teachers and then come back, it still wasn’t matching up. There was a huge missing piece. That piece was colonization, capitalism, white supremacy. The book needed to be written as a way of processing that gap between yoga in India, yoga in my family’s home in the United States, and then yoga in the yoga studio.

So the very first thing is, my understanding, in early India (we’re talking like around 2500 BCE, around 5000 years ago), in the Indus Valley civilization, the Saraswati River Valley civilization where Indian yoga as we know it was being developed, there was trade with Phoenicia and North East Africa. Now, I’m not an expert or committed Khemetic Yogini, but I do know that there are images, sculptures, and evidence that yoga postures or postures like yoga were being practiced in Africa. I believe that for thousands of years Black and Brown people have been practicing yoga or things like yoga. It’s important for South Asians and other Indians and Desis like myself in the diaspora to acknowledge that, my culture, Indian culture, may have developed and codified yoga in certain directions and we see that a lot, but there are roots and continued developments of yoga from Africa. There are Black folks in India. And many Indian folks are mixed, Black, Indian, and Asian. There’s a lot of nuance, and there’s a lot of opportunity for intersectionality. So the first answer is no, I don’t think that Black folks are appropriating yoga. However, there’s a moment where both Indians, and, like, anyone can take a practice, and say, “Okay. I just saw this ad for yoga with crabs.” Crabs! Like we don’t just hang out with the crabs and do yoga later. This is beyond. [Laughs.]

I don’t wanna do yoga with no crabs.

Right? So, when folks (and this could be even for someone from within the culture, Black, South Asian, Indian whatever), when we do things to a practice that are out of integrity with many of its basic tenets and principles, which, you know, is kind of beyond the scope of our conversation to go into those, but like the yamas and niyamas yoga, ethics, certain other practices, values connected to yoga culture like non-harm, then I think we can do harm. Yes, a lot of that is explained in the book, through looking at the causes of separation, including for folks of color. It’s not just a book for white folks. It’s a book for folks of color to look at where we may have been injected with that sense of separation from artistic reflection and then reconnection through action and liberation.

What two tips would you give to Black and Brown folks who experience microaggressions at yoga studios?

Practice the self-sustenance, care, and resilience to take care of ourselves first. If that means getting up and leaving, do so. You don’t owe that studio, that teacher, anything. Process with other friends of color, and then ask for support if you want to go back and address the microaggression. And for folks who are thinking of becoming teachers, we need all the Black and Brown teachers that we can possibly have. Yoga is our practice, it’s been in our blood, it’s been in our bones, it’s been in our muscles, it’s been in our souls for thousands of years. We shouldn’t have to deal with microaggressions or educating people. We should just be able to practice yoga with joy.

Susanna Barkataki leads yoga teacher trainings online and is the author of Embrace Yoga’s Roots: Courageous Was to Deepen your Yoga Practice. https://www.susannabarkataki.com

Why Black Women Need to Meditate and How to Get Started