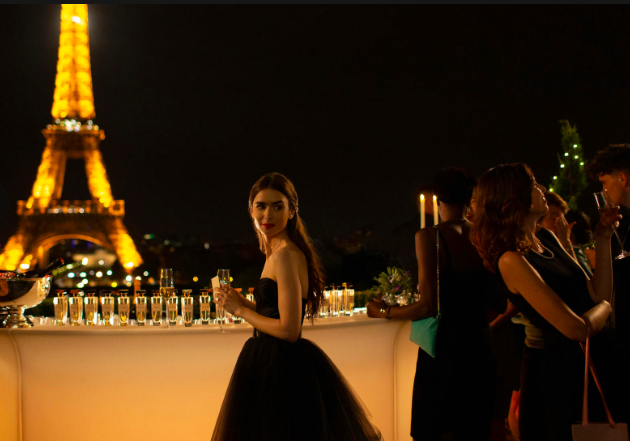 As Emily takes a run, she listens to French lessons. Good for her, but it is weird holding a phone while running even if it is convenient for taking and posting pictures. Again, Emily tries to open the wrong apartment door. Gabriel is sweet and charming. They’re most definitely going to kiss in a couple of episodes. Just as she is stepping out, Emily steps in dog crap, which leads her to posting another pic.

She notices that her social media is blowing up. At work, this time when Emily is called la plouc, she uses her phone translator to tell off Julien (Samuel Arnold) and speaks to Sylvie about how the office feels about Emily being there. Emily wants to be a part of the marketing campaign for De L’Heure and knows that Sylvie isn’t keeping her in the loop. Sylvie doesn’t like Emily’s approach in having their brand accessible to everyone, which isn’t on brand with their sexy, mysterious marker. Emily points out that she knows what it is like being on the outside looking in. Basically, she’s the voice for the customers they want to have. Sylvie invites her to the launch party that night.

Sylvie and Paul introduce Emily to Antoine Lambert (William Abadie), the owner of Maison Lavaux, perfumer and nose of Paris, as well as his wife, Catherine (Charley Fouqet). Emily makes an impact on Antoine but everyone else is not as impressed with her talking about work at a party. It’s a different lifestyle, babe. Later, Antoine finds Emily enjoying the view of the Eiffel Tower and proceeds to hit on her in a way. He points out that she’s not wearing the perfume and that all perfume does invoke a certain sexiness in a way. Emily tries and fails to keep the topic on work, but she does get his business card. Sylvie happens to be watching the exchange, and girl isn’t happy. Antoine is going to be problematic, but he is good looking.

The day after, Julien is calling Emily by her name and Paul informs her that Antoine wants her to handle his account. Sylvie comes in time to say that they were going to put Emily on work Vaga-Jeuene, a product that is vagina suppository for older women, you know, given Emily’s pharmaceutical background. Sylvie points out that Emily was too friendly with Antoine, and Emily is acting too innocent for the crimes. She had a hand in the flirting. Regardless, Sylvie knows that Emily is attracted to Antoine, and she is good friends with his wife. Julien, having heard the exchange, warns Emily that Sylvie is Antoine’s mistress. I wasn’t expecting that specific tea but I’m enjoying it anyway. However, Emily doesn’t like the tea and reaches out to Mindy for dinner.

Mindy gives Emily a lesson on marriage and affairs of the French, but it is too messy for Emily. Mindy happens to be an heir to the Chinese zipper kingdom that was cut off, hence she’s a nanny. Emily’s Americanness comes to a head with the chef about how rare her steak is. Did I mention the chef happens to be her hot neighbor, Gabriel? He doesn’t joke about cooked meat.

Emily prepares for Doug’s arrival by food shopping, posting pictures, and videos only to be disappointed by Doug not being on his way to the airport. Doug states he doesn’t know how to do long distance, Emily figured out everything for them, and he wants her to come home. If she doesn’t come home, they are over. The girl doesn’t budge and breaks up with him. He was wrong for the ultimatum but they were both at fault here.

After a night of tears, Emily wakes up to a rainy day. She goes straight to work on the vagina product, which she finds out is masculine in French verb terms. The girl posts a picture of the product on her growing social media with caption, “The vagina is not male!” That won’t be good for the company. She should know better, but now I understand the title of the episode. Mindy encourages Emily to not fret about staying in the city, and she isn’t alone. It’s truthfully the break-up blues.

Somewhere in a decadent home, Madame Brigitte Macron is being sent Emily’s Instagram post. Ma’am Macron tweets it. I’m concerned. Paul informs the team that he is leaving when he is texted by the CEO of Vaga-Jeuene about Brigitte’s tweet. The CEO is happy about it, which is unfortunate for Sylvie, who was just stating that Emily is annoying. It just so happens that Emily is passing by when Paul invites her to join them and celebrate. The backhanded cheers of calling Emily the American Vaga-Jeuene is not lost on Emily or me. Vaga-Jeuene means a young vagina. Sylvie is bitter.

I think Emily is very lucky that her Instagram photo was well received. Otherwise, this would have gone the other way quickly. Now, she’s on Sylvie’s hit list, and I hope she’s prepared. Luckily, she has Mindy, Luc, and maybe Julien to assist her through this battle. Newly single in Paris might be fun.