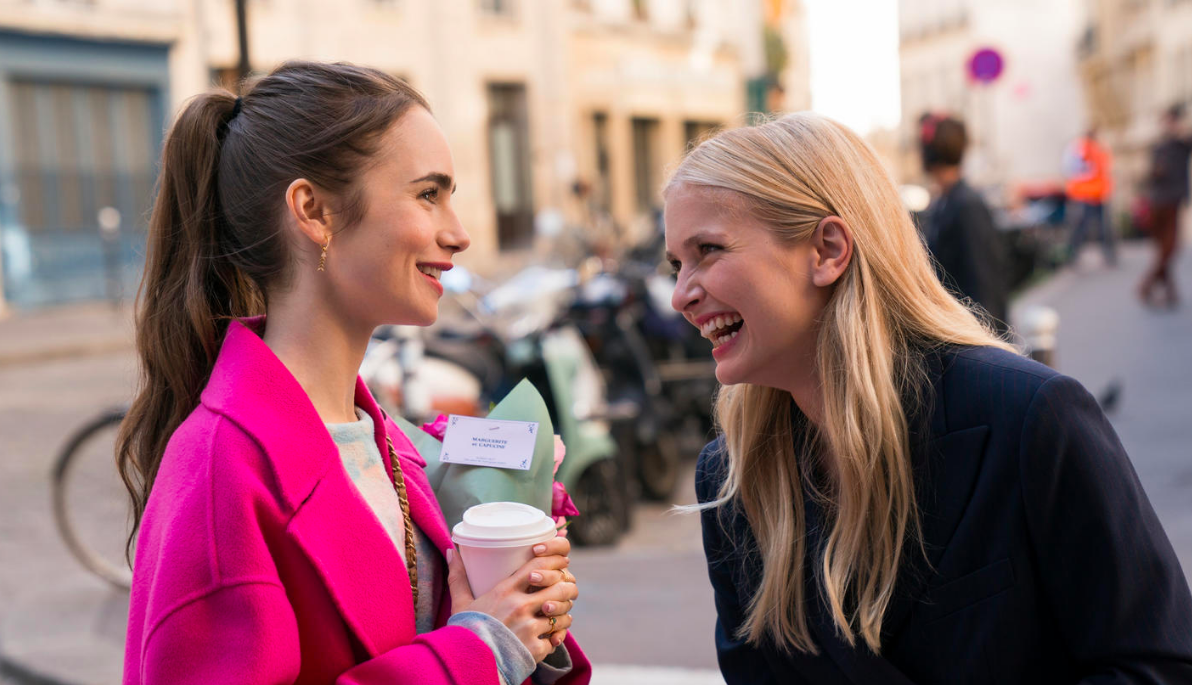 While out shopping for roses, Emily meets Camille (Camille Razat), who happens to speak French, is quite helpful, and nice. Camille invites Emily to an art gallery event where she is working. They accidentally kiss as they depart. Interesting.

Emily struggles with her packages from stateside but Gabriel is there to assist to bring them all up. He happens to notice the lingerie gift. Gabriel makes an omelet for Emily, and I’m jealous that mine never look so pretty. I need to work on that. He inquires about her work and the lingerie, which prompts her to tell him the issue behind it all.

Cue the problem at work. Sylvie is shouting at Antoine and Julien is happy to translate while trying to keep Emily out. However, Antoine is threatening to leave the marketing firm. Emily pitches an idea but states it’s Sylvie’s, on the spot, about marketing Antoine’s fragrance to a hotel group owned by Randy Zimmer, who happens to be going to the art gallery event that Camille invited her to. Emily leaves right after giving Sylvie the roses she bought.

Antoine is pleased to hear this and praises Emily. Sylvie isn’t pleased by the rescue or the idea. She inquires about the lingerie and who it is given by. Yikes. Luc and Julien demand to take Emily to lunch right away. The men point out that they know the gift is from Antoine, and they want Emily to explain herself. Luc explains how Antoine’s relationship with Sylvie started. The two point out that Emily should reconsider being with Antoine.

At the gallery opening, Mindy plays the devil’s advocate by encouraging Emily to have the affair with Antoine or at least to hand Antoine over to her. Camille introduces Emily to Randy Zimmer (Eion Bailey), who seems uninterested at first until Emily gives him a pitch on all the senses. He arrives the next day to meet the whole team and Antoine, who has various scents to share with him. During the presentation, Antoine and Sylvie bicker but Emily brings another distraction of dinner. Sylvie wants Emily to pick a spot, for reasons.

After the meeting Antoine speaks to Emily about her pitch and her gift. He continues to flirt and push her boundaries. Sylvie catches them again and suggests that Emily make a reservation at a place called Grand Véfour; Julien points out it is impossible to get in last minute. While they wait for a reservation, Antoine and Sylvie continue to disagree in front of Randy. Her online confirmation didn’t take on the date she wishes it to, so Emily calls Gabriel for assistance. She spins the bad news by stating they will be having dinner at the 5th. Dinner at the La Grand Véfour will be in November, in time for the hotel opening.

Antoine continues to pitch his fragrances using analogies like hotels and perfumes being the perfect affair. While he tries to flirt with Sylvie, it would seem that Sylvie has her eyes on Randy. Randy wants to go forward with the “affair,” which means Antoine is staying with Savoir. Gabriel makes an appearance and is almost poached to work at Randy’s hotel. Sylvie sticks around to compliment him on the food and lingerie then applauds Emily on her good work. Emily gives Gabriel a kiss then walks out to find Antoine and Sylvie entangled together. Just as she turns around, Camille arrives. Camille happens to be Gabriel’s girlfriend. He is shocked to find out they know each other.

I had big hopes for Gabriel. I really did. But, he is just as bad as Antoine. Emily doesn’t inform Camille that moments before, she was lip locked with Gabriel. Things are complicated, oui?