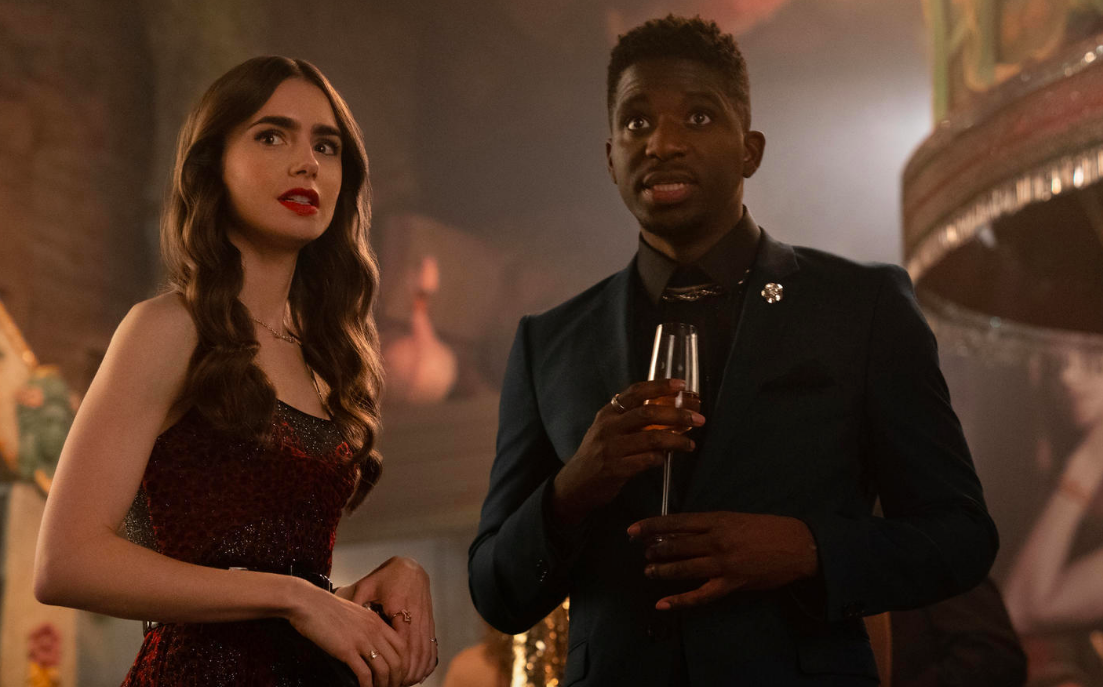 I’m noticing a lack of running in the morning. Emily and Sylvie happen to walk to the office together, allowing Emily to find out about Sylvie’s upcoming trip and giving Emily a chance to help with Fourtier’s flagship party. Sylvie appoints her on American actress watch. Brooklyn Clark (Carlson Young) happens to be Emily’s favorite. Julien and Luc don’t enjoy the romantic happy endings of American cinema; they prefer the more tragic and realistic French endings. How sad. Brooklyn is quite open about herself and her body but doesn’t seem any bit interested in Fourtier’s agenda.

Dinner with Mindy and Camille becomes très awkward when Camille tells them that Gabriel’s boss has agreed to sell him the restaurant. Unfortunately, the down payment is out of his reach, but Camille’s parents are willing to give him the money. Emily and I notice that Gabriel doesn’t seem okay with this. I get the feeling he and Emily will be able to talk about it at Fourtier’s party since Mindy and Camille won’t be able to attend.

While Brooklyn is trying on Pierre’s designs, a gorgeous Mathieu Cadault (Charles Martins) mistakes Emily as the actress but fumbles at lying about knowing her movies. You see Mathieu is Pierre’s nephew as well as the head of Pierre’s business affairs. So, the deal Pierre made wasn’t a deal. Don’t think for once that fazed Emily; she leveraged Brooklyn’s celebrity status to point out how relevant Pierre’s items could be to the market if Brooklyn is seen in his dress. Mathieu gives them a month’s trial with nothing cliché on social media. Emily signs off on Fourtier’s insurance documents on the watch Brooklyn is modeling, but why is Emily signing off on it? Oh, yes, Brooklyn is wearing the watch. That watch is going to disappear soon. I know it.

Antoine arrives with his wife and Gabriel makes it in time to be Emily’s beard. God help us all. Sylvie insists Antoine buys his wife, Catherine, a new expensive watch. Is she feeling guilty about her trip to St. Barth’s with Antoine? Catherine has heard a lot about Emily, is shocked to find out that the group had dinner at Gabriel’s restaurant, and thinks the hotel booking in St. Bart’s is for her. Sylvie is crushed and flees. Brooklyn is right behind her, with the watch. Luckily Gabriel is down for adventures at a club with an actress. I think Emily needs to secure that watch asap.

Cue another amazing kiss for Gabriel and Emily. Emily notices her phone is blowing up. She is in trouble because Fourtier wants their watch now. That’s not going to be easy. Brooklyn is high, drunk, and trying not to be America’s sweetheart. Also, she disappeared from the club while Emily and Gabriel were lip-locking.

Emily takes an amazing ride on the backseat of Gabriel’s scooter back to Brooklyn’s hotel. While they wait, they discuss Emily possibly getting fired and Gabriel’s dream getting put on hold due to lack of finances. Fourtier was smart enough to call Sylvie, who shows up at the hotel fix the situation and get into Brooklyn’s room. Brooklyn had a wild night and has a cute man in her bed. Luckily, the watch is on the dresser, and Emily gets an inspiring photo of Pierre’s dress on the ground.

On the ride down, Emily praises Sylvie for her gumption. She brings up Antoine and how Sylvie deserves more, but Sylvie doesn’t believe in fairy tales and white knights. Emily’s white knight is none other than Gabriel, making sure that she gets home safely and offers crepes while watching a sunrise. She wants more, doesn’t want to see him again, and refuses his heroic ride home by getting herself home. Brava girl.

Emily’s photo on social media impresses Mathieu. Pierre is considered sexy again. Pushing her luck, Emily offers a girl’s weekend at Disneyland in Paris to Sylvie. Come on girl, we were on a high note.

Brooklyn was fun and exciting to have around for one episode. The girl is too much work. Not gonna lie, I want Emily to have an American ending instead of a French. She can’t be hung up on Gabriel.