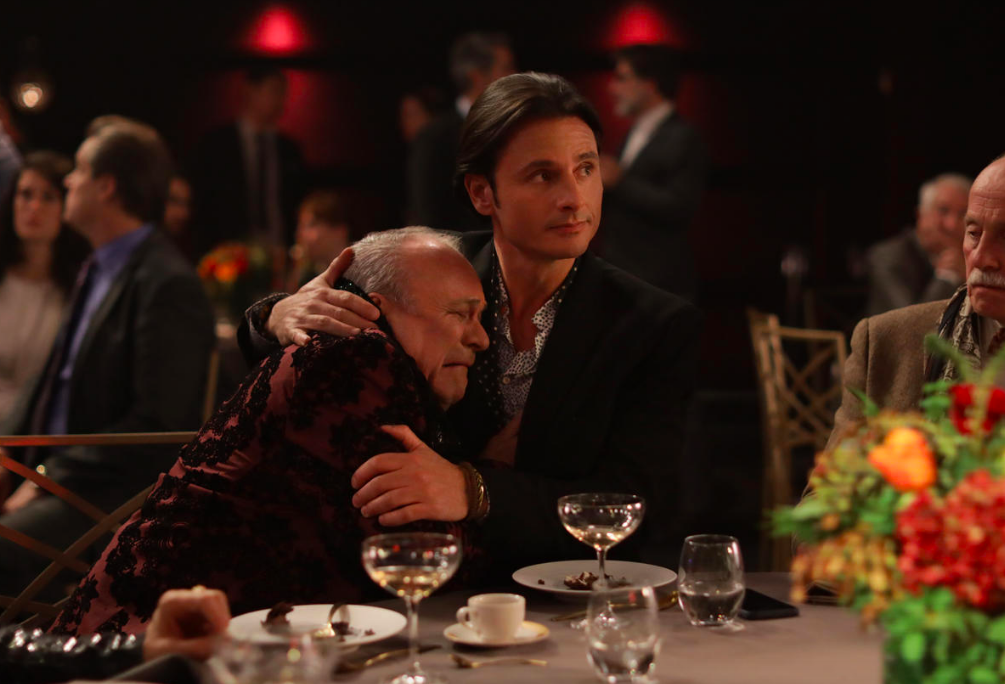 Emily’s pitch on the champagne came in clutch when she sent the champagne to her favorite bar in Chicago. The patron’s celebrated the Cubs’ win by spraying the champagne. Team Savoir will be meeting Camille’s family at a gallery event tonight. Sylvie is avoiding Antoine even though there is campaign that needs work, and Emily is wanted by one Judith Robertson (Faith Prince) from the American Friends of the Louvre aka AFL. Julien is always on point with his suits. Judith requests assistance in getting Pierre to donate a clothing item at an auction she’s holding. Let’s see if Emily can spin this to a marketable event for Pierre.

Mathieu is available to discuss business tonight and invites himself to the gallery showing. Camille finally meets Luc and Sylvie who is joined by Mathieu. Did anyone else notice Gabriel’s eyes on Mathieu’s hands that were on Emily’s hip? Boy needs to choose a team already. Luc points out how a painting is sexual but it is lost on sweet, innocent Emily. Luc is always talking about sex, though. Once Sylvie whisks Mathieu away, Camille points out the way the man is looking at Emily, how successful he is, and he is heir to Pierre Cadault. Gabriel scoffs at Camille’s insistence that Emily date Mathieu just because he is rich and famous. Their bickering over money is annoying and repetitive. Mathieu saves Emily by suggesting they go for dinner. Aww, Gabriel is upset.

While out with Emily, Mathieu discusses pancakes, fashion week, and growing up with Pierre. She’s able to get a donation for AFL and is surprised with a sweet kiss on the hand. Ah, a gentleman. The next day, bitter Sylvie points out that she saw Mathieu leaving with Emily, which is against corporate commandments. Emily insists that it was all business, but the girl was checking the man out on the internet just moments before. Antoine sends Sylvie a gift, but Sylvie tells Julien to return it. Emily refuses to open it but Luc does, to find beautiful nipple rings in the box.

Auction night is invaded by Grey Space (Isaiah Hodges and Christophe Tek), a streetwear duo design team from America. Emily tries to get them as clients but no dice on that one. AFL loses their billionaire model for the dress by Pierre Cadault, Mathieu overhears and suggests that Emily model it. She is a sight in the piece, which is bought by none other than Grey Space. That’s suspect. The boys spray her while she is on stage. It was all a publicity stunt. Terrible.

Everyone is concerned for Emily; even Gabriel pops up after seeing it in the newspaper. Sylvie is highly unimpressed despite the new followers. Grey Space has the dress up on showcase already, which prompts Emily to see the duo at their shop. They claim it all to be performance art and are fans of Pierre’s work; so obviously Emily wants them to prove it. Pierre is crushing crème brûlée when Emily comes by. He is sad that his clothing is loved by dying old women. However, Emily has a hoodie from Grey Space with Pierre’s name on it. The collaboration can bring more attention to Pierre’s brand. He refuses to have his name on something so ringarde. Mathieu awaits to hear how his uncle took it, but Pierre is at his darkest hour. He tells Emily that at the darkest hour, the French make love, then kisses Emily. She claims not to be that French; he says just wait. Okay daddy.

Emily has more love affairs in a short few months than I do in a year. Now, I’m with Camille when it comes to Mathieu. He is single and a fashion heir. So much easier to be with him. With only one episode left, I do wonder what type of ending we will be getting: French or American?