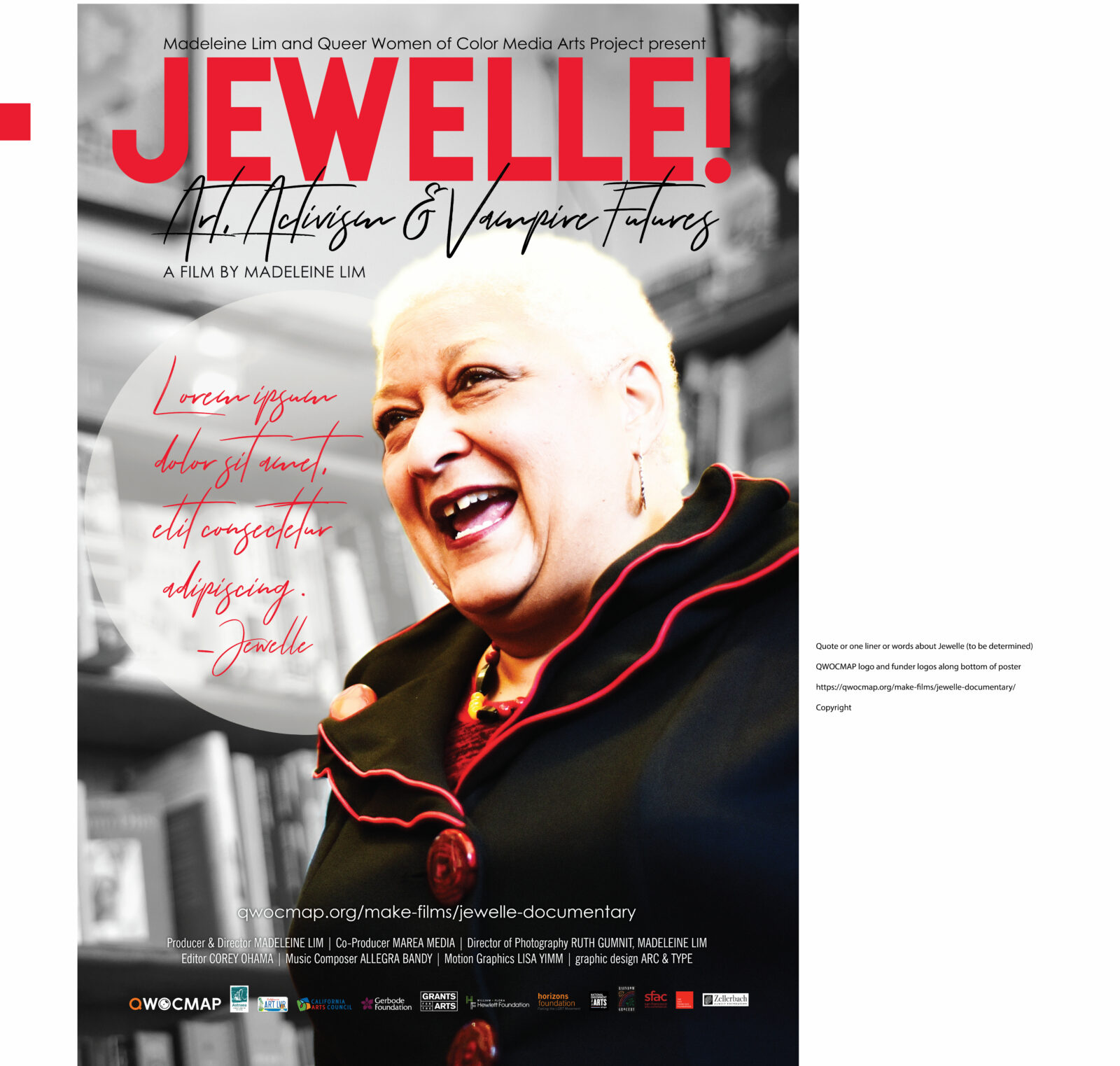 Jewelle Gomez is a groundbreaking Black Indigenous writer and activist and a hero of mine. Her work helped expand the boundaries of horror and speculative fiction with a prescient imagining of the past, present, and future of Black and Native peoples in the United States. A new documentary, Jewelle, executive produced by Queer Women of Color Media Arts Project (QWOCMAP), is working to bring her legacy to the screen. As a queer Black and Choctaw woman and managing director for QWOCMAP, it’s my pleasure to share why Jewelle’s story is so important to me and my communities.

In a post-Black Panther moment when Afrofuturism has made headlines, I feel it’s important to take a deeper look at the visionaries who helped found the movement. The documentary Jewelle explores the connections between Gomez and other progenitors of Afrofuturism and Black speculative fiction, including Octavia Butler, Samuel Delany, Tananarive Due, and Stephen Barnes, through a formative Clark Atlanta University conference. As Gomez says about the experience, “At the CAU conference, it felt like all of us Black science-fiction writers were together in one room, but I couldn’t name all of the African-American writers creating speculative fiction now — there are just so many people writing.”

In addition to Afrofuturism, and now African Futurism, we are also on the cusp of a growing wave of Indigenous Futurism. Here too, Gomez’s writing is foundational. Her works explore Native sovereignty, and the importance of Indigenous knowledge as a necessary antidote to current destructive capitalist extraction of resources. Gomez’s work offers us critical wisdom in this moment of climate crises. It speaks of the need to right our relationships to people, land, and other beings and offers dreams of transformative justice by drawing upon the history before settler-colonialism to imagine the future. Other Black Native writers like Rebecca Roanhorse, who imagines an alternate United States through speculative fiction populated by monsters, are connected to this legacy.

Gomez’s famous novel The Gilda Stories, which the Jewelle documentary uses as a narrative anchor, brings all of these themes together. While Gomez was inspired by Dracula and Gothic horror from a young age, her book completely rethinks vampire mythology. Her vampires are not monsters that cruelly kill or extract life from those they feed upon; instead, they take blood in exchange for visions that inspire those who nourish them. Through Gilda, a girl who escaped slavery, and Bird, a Native woman who survived the near-extermination of her community through Indian Removal and smallpox, we understand the origins of the oppressive systems we live under today. The novel also explores intimacy and love between women of color pushed to the margins of society, which has made it a fan favorite amongst queer women of color and led to two Lambda Literary Awards. In addition to novels and poetry, Gomez writes plays that bring to life the history of queer Black icons like James Baldwin and Alberta Hunter.

Gomez’s writing provides political warnings of the grim future we’re headed towards and the need to take action to change paths. As she wrote in her 1993 essay “Black Lesbians and Speculative Fiction,” “In our speculations about the future, the vision of the struggle is often quite brutal, but the vision of the triumph is equally fantastic.” As a lifelong activist who has championed causes including racial justice, LGBTQ liberation, equity in the arts, and intersectional feminism, Gomez knows these struggles quite well. Her activism includes cofounding the national media organization GLAAD and the Astraea Lesbian Foundation for Justice.

“The Gilda Stories has been vitally important for the development of a generation of dreamers engaged in radical imagination. It helps so many to understand how to take these mythologies that speak to us, pull them into our flesh, and breathe out visionary communities of resistance. Gomez not only shaped the future for writers, but also shares crucial knowledge for political organization through her writing.”

As a writer, dancer, and filmmaker myself, I’m passionate about Gomez’s work to ensure inclusion in arts and culture and funding for Black, Native, and other communities of color. I’ve spent much of my recent time as an activist fighting for equitable funding artists and arts organizations. Gomez is a model because of her hard work throughout her life to ensure that artists of color have funding through her roles on the New York State Council on the Arts, San Francisco Arts Commission, and the Horizons Foundation.

At QWOCMAP, I’m excited that I get to support new films by queer women of color and nonbinary, gender nonconforming, and transgender people of color filmmakers who are telling stories that examine the past and present and point to our future. It’s why I’m so excited for the Jewelle documentary. If this article excites you as well, I ask you to check out our For the Love of Jewelle campaign. As Jewelle says in the film, “We have to be able to imagine a better world, so that we can get to a better world. That’s why I like writing.”