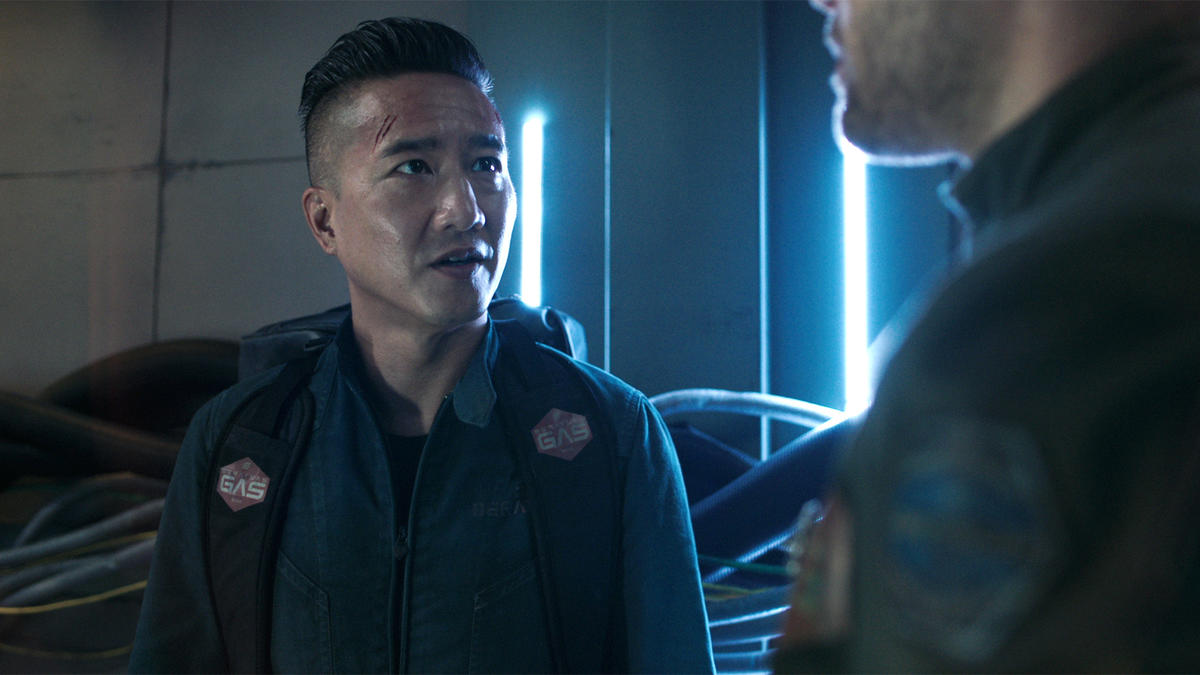 Praxidike “Prax” Meng, Bobbie Draper, and Chrisjen Avasarala are the Highlights of this Week’s Episode of #TheExpanse

In this week’s episode of The Expanse, there were moments of redemption, resistance, and pure shadiness. Here’s what happened in “Cascade.”

Holden is changing. He is no longer the pained, naïve, and optimistic man portrayed in previous episodes. Last week when he inadvertently caused the death of one of the captains on the Somnambulist, we were sure that he’d be wracked with guilt this episode. Instead, Holden is determined to carry out his mission on Ganymede and spends the beginning part of the episode playing ethical and moral hardball with Naomi. Naomi, ever the voice of reason does show remorse for the actions of Holden and the crew and questions their methods. But alas, there’s more pressing things to focus on, like protomolecule hunting and trying not to get killed.

While Holden and Naomi stew over the moral dilemmas of their mission, Amos is being Amos. Amos has really grown into an enjoyable character to watch. His intense stare and ability to fly off the handle make him somewhat unpredictable. And his uncompromising bluntness is well, disconcerting. This is illustrated numerous times during the episode, with one particular incident showing just how “different” Amos is from the rest of the crew. In the scene, Meng asks Amos how many people he has killed only to have Amos answer that he didn’t know, but that he isn’t a psychopathic killer (really, Amos?).

Holden and Naomi discover that Meng’s daughter is not on Ganymede’s deceased list and so they head over to the section of the Station that might provide answers on where she and Doctor Strickland (a proper evil doctor name if we ever heard one) could be hold up.

While Holden and Naomi chase down leads on Ganymede Station, Chrisjen is still mulling over Draper’s admission of the Seventh Man. The UN military thinks that Draper is a broken soldier suffering from the effects of a bloody battle, but Chrisjen knows better. She needs to talk to Draper but Draper is confined to her room where she gets a stern talking to by Captain Martens for deviating from the story she was told to repeat during her testimony.

Draper is totally fed up with her superiors, the UN, and war, in general this episode. She keeps tuning out and focusing on what little she can see of Earth’s environment. A bird, sunlight, the vastness of the Earther sky all seem to calm and center her. This behavior suggests that Draper might have had an interest in terraforming prior to becoming a Martian Marine. This would explain why in earlier episodes, she’s always mentioning terraforming and takes every opportunity to imagine Mars’ environment changed. It would be interesting to see her say “F#ck this shit. I wanna farm!” at some point in the series. It seems like Captain Martens (Martian military) has an inkling that Draper might be falling in love with the fresh air, seagulls, and vast skies of Earth because when she asks to see the ocean, he vehemently tells her no. Draper isn’t having it. She’s getting ocean, just wait.

While Draper is dealing with the bullshit of her government, Errinwright decides to come clean about his relationship with Jules Mao; father of the protomolecule experiments. After reviewing Draper’s armor for exotic materials and stewing about Draper’s description of the Seventh Man, Errinwright visits Chrisjen. He reveals everything and hands over data on a weapon that Mao was working on that consist of a humanoid looking critter that can withstand the pressures of space with a vacuum suit (oh snap!). Chrisjen doesn’t blink an eye and reveals to him that she’s known of his relationship with Mao for some time. As Errinwright expresses his motive (Earth First), Chrisjen contemplates just how she’s going to navigate this new nemesis; the protomolecule.

Back on Ganymede, Naomi and Holden interview a doctor and ask her if she’s witnessed weird illnesses on the station lately (evidence of the protomolecule). No one has seen any weird illnesses, Strickland, or Meng’s daughter. Meng is also questioning survivors and is paired up with Amos. While investigating the whereabouts of his daughter, Meng notices that the station’s hydroponics have been contaminated. This observation is very important as the moon provides much of the solar system’s food. Meng is disturbed by this fact, but remains focused on finding his daughter and seeks out the services of Roma; a man who finds people on the station and requests payment in canned chicken. When Meng, Holden, Amos and Naomi find Roma, it takes some proper pummeling to get him to oblige their request (they don’t have canned chicken to pay him with), and he discovers that Meng’s daughter is with Dr. Strickland on the oldest part of the station.

While the crew of the Roci continues their wild goose chase, Draper has had enough! She breaks out of her quarters by removing one of its windows, falls several levels down, lands on the ground and takes off running. It was uncomfortable watching her experience the true nature of Earth’s gravity but lucky for us, Draper is tough as nails and the incident leaves her uninjured. Draper spends the rest of the episode wandering the streets of Earth looking for the ocean. She meets Earthers living on the street, wasting away, left in the shadows of a society that has forgotten about its people. They are vagrants, they are people who had dreams of being doctors. They suffer from mental illness and don’t have access to consistent meds. They drink putrid radioactive water that results in them dying in the Summer. They are lost souls and Draper begins to see Earther’s in a new light.

When she finally gets directions to the ocean from a kind Earther called Nico, Draper is more relaxed than she has ever been. She puts her feet in the undoubtedly polluted water and looks out at the horizon with appreciation. While she’s sitting there, soaking up the essence of Earth, Chrisjen approaches her. With very little time to talk, Chrisjen drops a bombshell; Mars is working with Jules Mao and is responsible for the incident on Ganymede. Draper can’t believe it, but as Chrisjen scurries away to avoid the Martians that have some to collect the marine, we can’t help but wonder when Draper will start wreaking havoc on her own corrupt government.

This week’s episode was an excellent examination of the corruption that can weasel its way into government. It’s going to be satisfying watching Mars wiggle with discomfort next week when their secret comes out. Until next week, yam seng!

Catch The Expanse next Wednesday, April 4th on the SyFy network. 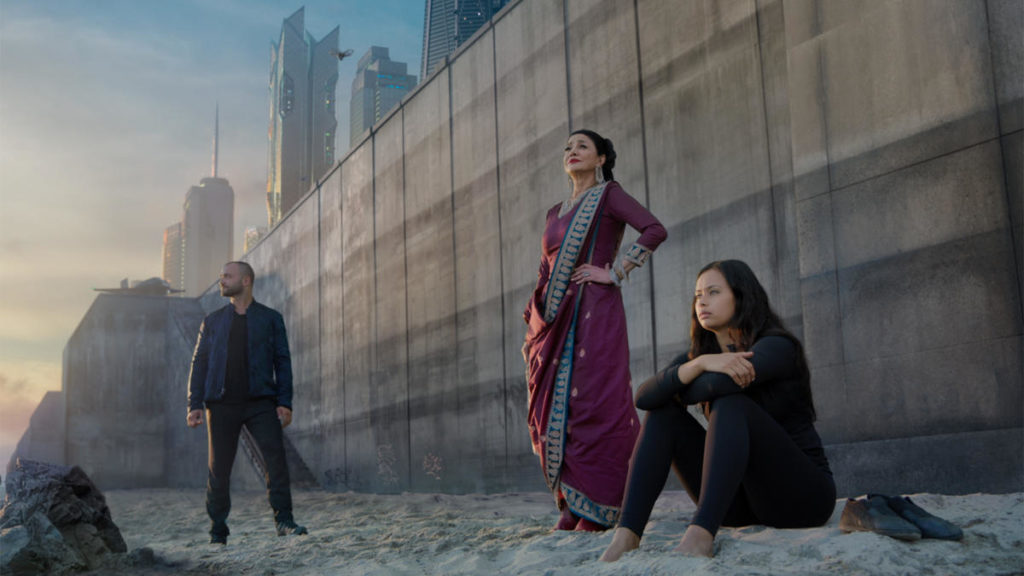