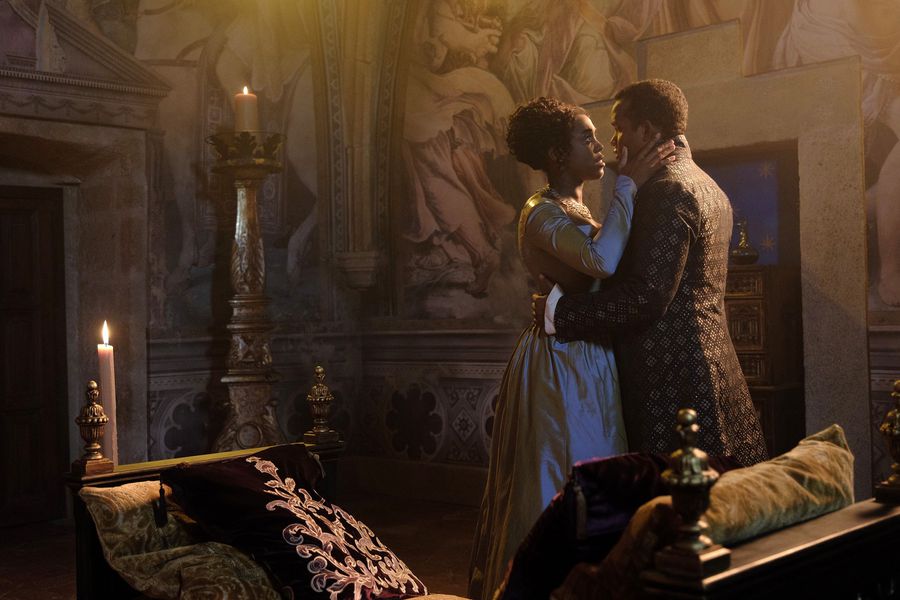 I mentioned last week that I first spotted Sterling Sulieman (Escalus) on Pretty Little Liars. Escalus seemed a far cry from the stalker-murderer he played on that show, but perhaps the two have more in common than first appeared. “The Course of Love Never Did Run Smooth” makes a good case for Still Star-Crossed shaping up to have plenty of moral quandaries for Escalus, who’s trying to balance his heart with the needs of Verona, and often siding with Verona’s best interests. Or at least what he thinks they are. By episode’s end, Escalus watches a man be beheaded and doesn’t even flinch.

Despite what you may think about Escalus’s decisions, you can at least see why he’s making them. Before his father died, he sent Escalus away so he could “learn how to rule” and to put distance between him and Rosaline (because it would look very bad if the crown was seen to favor one family over another). Escalus didn’t even get to say goodbye before he was shuffled away, but what he saw then as callous unfairness on his father’s part now makes perfect sense. Neither man can show weakness in front of the grasping Montagues and Capulets, and Escalus even stabs a man with a fork when he threatens to turn their peaceful dinner into another argument.

If this is the real Escalus matters little, but it’s probably the one that we — and particularly Rosaline — are going to have to get used to. As she maintains that she won’t marry Benvolio, Escalus finally cracks and swears that he won’t make her. He’ll find another way to prove his strength, but when Romeo’s body is dismembered (because someone definitely wants war in Verona), he goes back on his word. If that wasn’t bad enough, he not-so-subtly threatens that Rosaline either gets married or he allows everyone to believe that Rosaline is sleeping with him, which she might be fine with if it wouldn’t mean Livia’s prospects would also be ruined.

It’s necessary to prove that the crown can’t be manipulated by the Capulet/Montague feud, but of course, it’s also proving that that’s exactly what’s happening. Everything Escalus is doing is meant to appease and quiet both families. Even if he’s bending over backward to reaffirm his authority, the attention he’s paying to them proves they have more influence over the royals than any two families (especially non-royal ones) should.

And it hardly matters that Escalus is king when the Capulets and Montagues just find ways to work around him anyway, or in Lord Montague’s case, rope Escalus in. When Montague finds out that the Capulets don’t have the money to finish their perpetually-under-construction cathedral, he casually suggests that it be the site of Rosaline and Benvolio’s wedding. He plays it enough like an innocent suggestion that the resulting argument looks particularly stupid (at one point, the two seriously begin to resemble the Real Househusbands of Verona). Cue Escalus asserting that yes, the wedding will be in the cathedral (or else someone may find a fork impaling some other limb). And cue Capulet killing his architect.

It’s not the most exciting episode, even after the premiere did a good job setting the stage for what’s to follow. Rosaline’s determination not to marry Benvolio is admirable but of course naive, as she’s not fully aware of what’s driving Escalus down this more pragmatic path.

The rest of the episode is a lot of hinting at what’s to come, like Lady Capulet’s obsession with holding someone accountable for Juliet’s suicide. The Friar may have been spooked by all her questions, but for now Lady Capulet’s attention is on Rosaline, who she thinks orchestrated Juliet’s death so she could take Juliet’s place in the Capulet family.

Benvolio gets slightly — slightly — more to work with this week. His optimistic bad boy behavior is intriguing if only because I’m not one hundred percent certain where he fits into all this family feuding. His resistance to marrying Rosaline has less to do with her being a Capulet and more to do with her just being her (and of course not being in love with her). Lord Montague had to bribe him into helping snoop on the Capulets, and Benvolio’s far less interested in telling everyone about Rosaline and Escalus, a factoid that could definitely earn him and his family some pull. But Rosaline’s failed effort to stop the marriage does mean that the two are either going to be forced down the aisle or they’ll be forced to work a way out of it together.

Either way, there will probably be kissing. Bring it.