With the onslaught of shows to stream and binge, it’s nice to have a film that breaks up the monotonous flow. You’ll find such a film in Amazon’s new drama-thriller 7500.

The film stars the always fine Joseph Gordon Levitt and a variety of new international faces. 7500 is brought to you by German writer and director Patrick Vollrath. Unknown to a lot of us in the United States, Vollrath was nominated for an Oscar for his film Everything Will Be Okay, in the Live Action Short category in 2016. 7500 is Vollrath’s first feature-length film, and it’s giving audiences a new perspective. The creativity of this up and coming director is highlighted in a big way with 7500.

They say you learn something new every day. Well, the first thing we learn in this film is that “7500” is the air traffic control code for “aircraft highjacking.” It makes sense. 7500 follows First Officer Tobias Ellis (Gordon-Levitt) as his plane is hijacked by terrorists in flight. 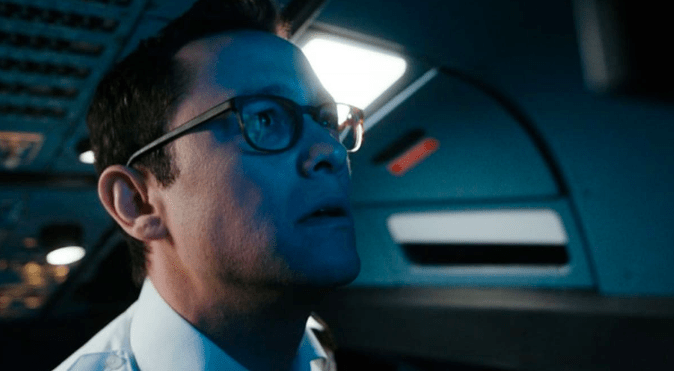 The artistry of this film comes in the form of seeing everything unfold from the cockpit. Apart from the opening scene and closing scene, which gives us 3 minutes of security camera footage and a 2-minute view from the plane aisle, everything occurs in the cockpit. The claustrophobic feeling that builds while watching the movie adds to the thrill of it all. From the viewer’s perspective, this adrenaline build-up wants the characters to make moves you already see playing out in your head. Every detail counts.

The compact view gives insight into the “bad guys” of the film as well. Vollrath creates an out-of-the-norm experience with the terrorists. We get to see them as real people. Often, in films like this, the terrorists are depicted as nothing but fanatical monsters. In 7500, a small connection forms with the bad guy that makes you question how you want to see the movie end. The fact that a film like this can give you pause to question the presence of the highjacker is a marvelous feat. It feels like you are with them from beginning to end. From security check to take off. From take-over to landing. There is a real authenticity to it all.

While watching the film, the characters are calmer than you are. This irrational sense is what throws the audience slightly off. Joseph Gordon-Levitt is a fantastic actor and notably plays this role very well. That said, his character is much too docile under the circumstances. That sense of fight or flight that we usually see in these types of films is lacking. Some may say this is a conscious stylistic approach. To me, the energy is there but displayed at the wrong times. Levitt’s dramatic outbursts that display passion and vigor came when he was on his own. The fire in the heat of the moment amidst uncertain life or death is missing. It subdues the impact of the film.

While the new perspective is dramatic, it also has negative side effects. Due to the limited view, we are stuck, unsure of what to notice. We are stuck wondering what those eighty passengers are doing the whole time. A lot of the action happens off-screen. The audience is stuck in point of view of the pilot. No judging, but this is one of those movies you can’t help but yell at the characters on screen because they are moving just a little too slow. The film was lacking in the action department, which feels wrong for a thriller.

There is also the notable absence of music. All the audio we hear during the film is all part of the fictional setting. The only music or melodic tunes come from a cellphone. It’s slightly eerie. The perspective highlights the good, the bad, and the questionable. It gives the film a more life-like quality. The film is so documentary-like in tone, you will question if it’s based on a true story. It works well with everything.

This is not a made-for-tv film, but alas, that’s the world we find ourselves in right now. It’s disappointing that this film won’t be seen on the big screen. Imagine getting a claustrophobic feel accompanied by lifelike sounds in a dark, enclosed auditorium. It’s a feeling that could have added the right touch.

7500 originally premiered at the Locarno Film Festival in August of 2019. The film was slated to release on June 19, but Amazon felt it prudent to push the release date up a day in respect of Juneteenth. 7500 will be available to stream via Amazon on June 18, 2020.

Mrs. Maisel, Mei Lin, and the World of 1960s Chinatown