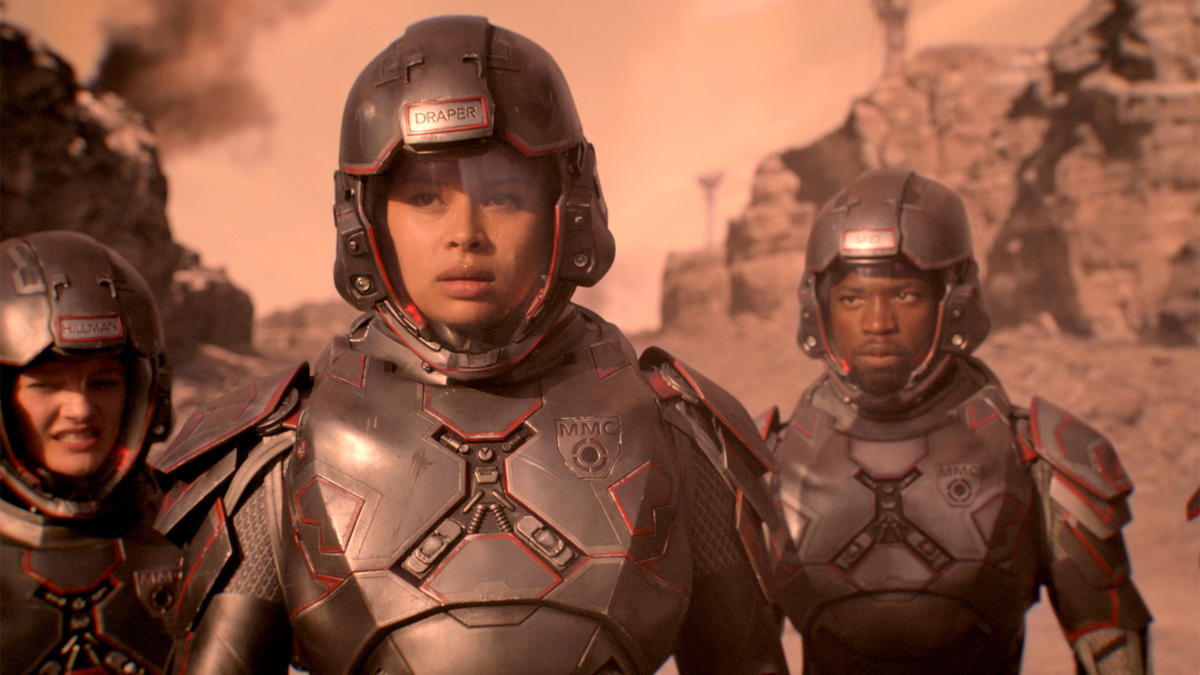 Season Two of The Expanse isn’t playing around. With possible interplanetary war on the horizon, there’s nothing light about the one hour and thirty-minute premiere of the show. If anything, things are more complicated this season and stakes are set at astronomical heights.

When we return to the politically charged world of the Earthers (lazy Earthlings), Martians (tough ass terraformers), and Belters (gravity sensitive asteroid people), we are properly introduced to what I like to call Martian grit. The Red Planet is populated with people that want to pummel the heck out of Earth for its perceived languor and terraform Mars into a veritable paradise. They work hard at everything that they do and the cornerstone of their society is based on the tenets of terraforming. We don’t actually meet the terraformers (I’m curious of what mad terraformer scientists await us) this episode, and instead are introduced to the six-foot-tall, mechanized armor rocking Bobbie Draper (Frankie Adams).

Draper is a Martian marine with dreams of seeing her planet properly terraformed. She is tired of wasting time sparring with the Earthers, whom she feels are lazy and undeserving of their planet (a sentiment shared by Belters and Martians). She trains for a war she sees as inevitable and is the team leader of her formidable squad. Frustrated that her planet’s terraforming program has been pushed back due to resources being cannibalized by the Martian military in response to Earth’s stealth ship shenanigans of last season, Draper is fond of reciting battle chants and is ready to demolish any Earther she comes in contact with. We witness her ability to pump up her marines as they prepare to board the Phoebe Station (origin of some nasty extrasolar activity that we saw manifest in Julie Mao last season) when she chants about Martians invading Earth, stomping Earth’s mountains to dust, drinking up its water, and basically ridding it of its vermin (Earthers). It would have been nice to see Draper wreak havoc on Phoebe Station in the name of Mars, but she never gets to set foot on the station. Instead, Phoebe is blown to bits by her commanding officer under the order of the Martian government.

Draper’s frustration with the Martian and Earther handling of Phoebe Station is tangible, and she makes you want to slap fools for messing up solar system dynamics. As much as Draper hates Earthers, she doesn’t mind Earther immigrants. Draper sees anyone willing to defend Mars as a patriot, and she demonstrates this belief when she chastises the Martian-born members of her team when they pick on a marine who emigrated to Mars as a child.

Martians aren’t the only ones pissed at the present interplanetary climate. The crew of the Rocinante is still recovering from their stint on Eros when we see them. Josephus Miller (Thomas Jane) and James Holden (Steven Strait) are skeletons of the men that they were with Holden wracked with guilt and Miller trying to find his Belter self. The whole crew has undergone a sort of transformation, redefining who they are as they try to come to terms with the genocide they witnessed on Eros. Naomi Nagata’s (Dominique Tipper) voice of reason and empathy is stronger than ever. She carries the crew’s burden like a champ, making hard decisions and thinking ahead to the future. Under her guidance, they investigate the capsule they recovered last season and discover that it’s filled with the proto-molecule. She makes the decision to hide it in an asteroid field in hopes of using it to make a vaccine in the future. She treats Holden and Miller for radiation poisoning, keeps the trigger happy Amos in check, and reconnects with Miller on a Belter level, both of them acknowledging that the powers that be don’t give a damn about the peoples of the Belt. Nagata is the driving force behind the crew and really should be captain. [Editor’s Note: The entire time I watched, this is what I was thinking. Holden’s leadership abilities are comically out matched by Nagata’s.]

The captain of the Rocinante, James Holden, is broken. He’s traumatized by the genocide he saw on Eros.

Alex Kamal (Cas Anvar), the Martian pilot of the Rocinante, spends his time trying to help the Belters they were able to save from the proto-molecule experiment. Alex is as lovable as ever, preparing lasagna for the crew as a means of showing solidarity and cracking jokes to lighten the somber mood. The Rocinante’s newest crewmember, Miller, is heartbroken over the death of his friend Simi who was killed last season by the trigger happy Amos Burton (West Chatham). Amos still exhibits some psychopathic tendencies, but with Naomi’s help, he’s able to control his violent responses, sparing Miller’s life when they get into a scuffle.

After some drifting in space and lasagna eating, the crew of the Rocinante eventually make their way back to Fred Johnson’s space station. When they inform the leader of the Outer Planetary Alliance (OPA) that they’ve discovered a secret science station that’s receiving the data from the proto-molecule that plagued Eros, Johnson agrees to help them investigate.

Meanwhile, Deputy Undersecretary of the Executive Administration of the United Nations, Chrisjen Avasarala (Shohreh Aghdashloo), is trying to root out the corruption within Earth’s governing body. In order to do this, Chrisjen seeks out OPA leader Johnson, a man that the Earth and Martian government recognize as a terrorist. She knows that contrary to alternative facts (insert wicked smiley face), Johnson didn’t build the stealth ships that destroyed a Martian warship last season and might not be the terrorist he is made out to be. After the UN’s Fleet Commander steps down in disgust over the provocative military escalation that the UN favors, she seeks him out and asks him what he knows about Johnson. He asserts that Johnson is an honorable man. Upon hearing this, Chrisjen makes the decision to commit treason against Earth by contacting Johnson; a man she believes she can trust.

In the meantime, the crew of the Rocinante and Fred Johnson are making a go at the rail gun protected science station with ties to Eros. The result is some pretty badass flying by Alex and we see the bravery of the Belter volunteers with far less state-of-the-art equipment, proving that they might be braver than Martian marines. It is during this scene that Miller is seen reconnecting with his people. Gone is the Earther hat that he sported in defiance of his Belter heritage in the first season. Instead, his radiation racked frame is jittery as he is both fearful of the mission (it has a low chance of succeeding) and enraged about what happened to Julie Mao and his people. He connects with a young Belter that he arrested last season for stealing water and the two bond over Miller redeeming himself by standing with his Belter brothers and sisters.

The science station mission is successful and the truth is revealed about the proto-molecule. The head scientist on the station informs Holden, Johnson, and Miller that the proto-molecule is extrasolar in origin and was sent to the solar system purposefully by an unknown source. The scientist informs them that the Belters on Eros were infected to save the human race and were sacrificed so that he could study the extrasolar entity. He tells them that the molecule was sent to highjack life on Earth as part of its evolutionary process. He urges the three men to let him continue his work so that Earth, Mars, and the Belt can be prepared for the future. Johnson and Holden, realizing the implications of this possible weapon sent by aliens, agree that the scientist can continue his research as long as he gives them the information on who was behind the decision to unleash the molecule on Eros. The scientist agrees to Johnson’s terms and is immediately shot in the head by Miller. Miller doesn’t speak a word.