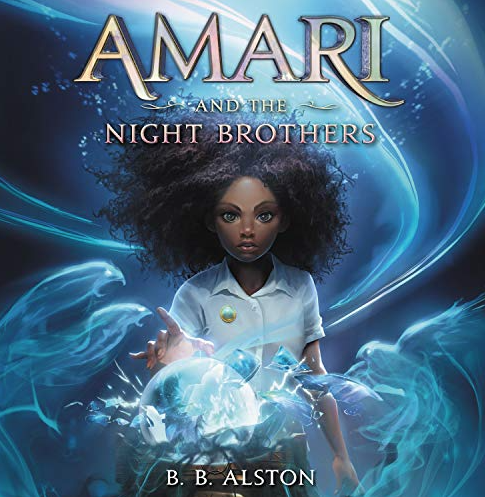 Written by: Pella the Pilgrim

I recently had the opportunity to read the book Amari and the Night Brothers. My love of reading started with a series of fantasy books so YA fantasy novels have always had a special place in my heart. Amari and the Night Brothers is a middle grade debut novel of B.B. Alston. We follow a 13-year-old Amari on her search for her older brother Quinton. Her nerdy, kind, can-do-no-wrong brother has been missing for six months.

Amari is unwavering in her belief that Quinton is alive. After months of no activity, Amari receives a lead. She sets out to discover a world of fantasy and the technological advances of the supernatural world.

When we are first introduced to Amari, she is in the principal’s office with her mother. She has gotten into trouble for acting out, which is quickly attributed to the stress she is under due to her brother’s disappearance. Amari, the faithful younger sister, is adamant that he’s just missing while others aren’t so hopeful. We’re met with magic and intrigue as a mysterious package is delivered to Amari.

The motivation to find her brother Quinton is the driving force in a lot of Amari’s decisions throughout the novel. I always enjoy a good fantasy adventure, but I especially found Amari and the Night Brothers a good read because of the subtext. One of my favorite things about reading is finding the allegories in the text. With YA novels in particular, not only do you get an immersive and entertaining story, but you also can find ways that the hero’s journey aligns with your own story.

Amari is recruited/nominated to the Bureau of Supernatural Affairs by her missing brother. To Amari’s disappointment, this isn’t a new contact, but a prearranged message to be delivered in case he is missing or dead. Still missing confirmation of her brother’s well-being, she is energized as this is the first lead she has had in months. Before Amari can learn more about Quinton’s involvement with the Bureau and his possible whereabouts, she must accept the nomination to join the Bureau.

While most people would be thrilled at finding out that magic exists and being invited to join a magical agency, this in just a means to an end for Amari. While she is impressed by all of the new magic, gadgets, and characters that she encounters, Amari’s motivation is finding out as much as possible about Quinton. Amari’s persistence is a testament to her heart.

Part of her probationary period is a summer tryout where she is competing with other people who have the advantage of being legacies and having previous knowledge of the supernatural world. Amari isn’t intimidated by this as she navigates this unfamiliar territory. This why representation matters. Remember how before I mentioned allegory? Yes, this is one of the allegories of Amari and the Night Brothers.

There is a parallel to Amari’s introduction to the supernatural world to how a lot of young Black/Brown kids feel when they enter rooms full of people who don’t look like them or come where they come from.

This isn’t just my interpretation either. There’s a moment when Amari has to do an assessment to determine her magical potential and ability. The assessor has ‘a feeling’ and predicts that Amari will score on the lower end of the spectrum (third from the bottom to be specific). I immediately identify this moment as when she loses hope of thinking that you can escape the disadvantages that, as a young Black girl, she faces in the human world. She is being introduced to a new world that she didn’t know existed and is immediately expected to be an underperformer. Because even now, as she’s been recruited to one of the most exclusive organizations, she isn’t expected to be the best.

Amari takes the assessment and literally scores off the charts. Innocently Amari asks what that means, and the assessor, instead of acknowledging that he may have misjudged Amari, ignores her question, and we are left to wonder what the results mean. We later find out that Amari is unique and has a lot of potential. (I mean… duh. Black Girl Magic, anyone?)

I’ve been there myself (still going through it in many ways), and I am not a 12-year-old girl. I can only hope that the young audience can see these moments and cheer for Amari as she learns more and more about the magical world and the mystery of what happened to Quinton reveals itself.

As the action picks up, Amari’s ‘BGM’ actually helps her navigate her own magic in the new supernatural world she’s been introduced to. She finds herself an outcast, but that’s not anything new. She is not deterred by the people who are intimidated and afraid of her. She’s not dissuaded by those who discount her.

I was excited to find out that Marsai Martin has been tapped to start and produce in the movie adaptation of this book. The book will be released in January 2021. I look forward to seeing it on film.

The book was not difficult to read. I believe the story would be enjoyed by anyone at any level; however, the content and complexity of the novel is the most appropriate for middle grades. The magical and science fiction elements aren’t as intricate as other novels I’ve read in the genre, while it’s amazing that some of the aspects of the story creatures and gadgets are explained in a topical fashion.

I thoroughly enjoyed reading this book for several reasons. One, it’s a good book. The characters are endearing and intriguing. The story is engaging as we search to resolve the mystery surrounding Quinton’s disappearance and simultaneously navigate this new supernatural world. Two (and most obviously): Amari is a young Black girl, just like I once was.

Amari and the Night Brothers is told from the first-person narrative, so being able to see myself/similarities to the characters is one less step I had to take to get lost in this read. I’m outside of the target age demographic, but I am optimistic that this impact will not be missed on the middle grade kids that will read this. I hope that they can rejoice at seeing depictions of themselves in these fantasy novels.

Amari and the Night Brothers is available 1/19/21.