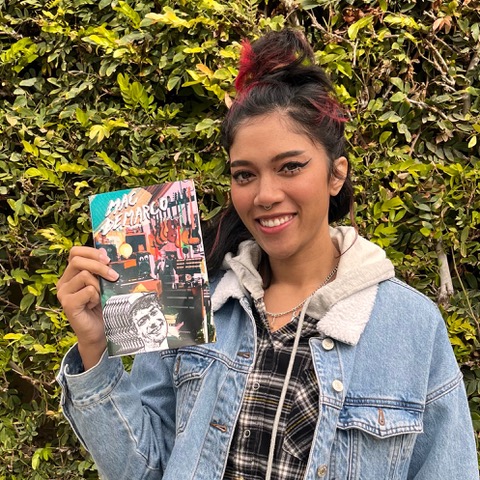 Breahna Upton is a woman in demand.

The Long Beach, California-based creator, whose Etsy shop frequently needs to be restocked due to demand, has been making zines since 2017. Upton got her start in self-publishing after running into red tape in the form of college literary journals not giving her a chance. As she puts it, her work was “too messy” — supposedly not polished enough for university publication. Following a friend’s suggestion, however, she decided to make zines on her own, giving her an opportunity to showcase her voice as she knew it to be rather than what collegiate editors expected of it.

Since then, Upton’s work has taken off. She has been featured in zine fests, workshops, and even created an official fan club zine for recording artist Mac DeMarco. We conducted an interview with her via email to learn more about her creative process, her successes, and why she feels it is important for BIPOC artists to have creative outlets.

So, what attracted you to zines over other media?

I’ve always been a lover of the written word and print media. That’s what initially inspired me to go to school for English. So when I learned about zines, oh man, I was immediately infatuated! The DIY aspect, cutting and collaging, being able to see my own handwriting in a zine right next to typed-up print…that’s all so amazing to me.

Your zines and merch have covered everything from bangs, to roller skating, to your time doing stand-up comedy (and the joys of “[r]unning into all [your] exes in one night”), to pressing social issues such as anti-racism and defunding the police. What helps you choose the topics you cover?

It’s such a cliche answer but I choose topics based on how I’m feeling at the moment. All of those topics you’ve mentioned made it into a zine because I felt strong emotion regarding them…and had no one to express those feelings to. Doing stand up comedy was the closest thing I had to expressing myself publicly, but after COVID hit in 2020 and that platform was gone, I began diving head first into zines again. So I guess I choose zine topics the same exact way I chose my standup comedy “bits,” you know? By asking myself: What is it I want to say to people? What viewpoint am I wanting to share and why?

Recently, you produced a zine for the Official Mac DeMarco Fan Club. How did this opportunity come about?

TikTok! Similar to my last answer…when COVID put us all in lockdown in 2020 I had to find other ways to express myself. TikTok was a huge thing for me that year because I just started sharing my zine process, posting my drawings, and making tutorials so other people could do what I was doing. I never stopped making TikToks, and thank goodness because one of Mac DeMarco’s managers came across my videos and offered me the job on the spot.

She explained how much she enjoyed my art, but what stood out about me was that I was encouraging others to be creative by showing them exactly how they can make what I make. I wasn’t gatekeeping my process. She was really into that, and my style, and said if I wanted the job it was mine.

Would you do it again?

I would absolutely love to do a zine commission again. It was a lot of hard work, and my creativity had a deadline so that was very new to me. However, the fact that they gave me creative freedom and allowed me to make a true-to-definition zine was incredible. They didn’t want to take my work and make it into a fancy magazine you find at the check out of Target. They let me hand make all 20 pages and just made copies. That’s a dream come true!

Last Autumn, you and fellow zine creator Baby Ballou hosted a workshop helping others create their own zines. Why did this appeal to you as opposed to trying to, perhaps, “avoid competition”?

Baby Ballou and I met through TikTok. As a fellow zine maker herself, she was really excited about my page because I posted a lot of tutorials. She reached out to me with gratitude that I didn’t “gatekeep” my zine process, which was really wild! I never thought gatekeeping was a problem within the community. Zines were created to be accessible to everyone as opposed to traditional magazines, you know? But turns out there was a lot more gatekeeping than we thought. She curated the entire workshop herself and invited me to host it, so I can’t take credit for that amazing event. However, the event was bred from our discussion of killing the idea of competition in the zine community. We wanted to share what we know, enlighten others about the sides of zine history that are often disregarded, and encourage everyone at the workshop that their ideas are valid because they are their ideas.

Your webpage also highlights the Black history of zines. Why was this important?

It’s incredibly important for people interested in zines to know that they were not first created in the 1930s by white men, which all the literature you find on zine history seem to reiterate. I am not, in any way, shading those guys who made fanzines back in the ’30s…those zines are significant in the zine timeline and I enjoy them. All I’m saying is that it’s not true that they created them. Society needs to stop rewriting history to exclude Black people.

Back in the early 1920s, during the Harlem Renaissance, Black writers, activists, and artists started making zines but called them “little magazines.” That history is nowhere to be found in those very same articles that talk about those zines from the 1930s by white men. If we’re going to educate the public about zine origins, I think it’s important to not erase Black contribution, especially when there is a huge problem in the United States of white Americans stealing from Black culture and reclaiming it as their own. I really wanted to include the Black history of zines on my website so anyone who visits it understands that, as a Black creator, I will always push for credit where credit is due.

Finally, entering Black History Month, is there anything you would like to say to aspiring content creators of color, especially women of color interested in making zines of their own?

I would tell them to make that zine! The world needs your voice, your perspective, and your ideas. Stop waiting for the right time, stop hesitating due to your own fear or insecurities, and start putting your work out there. You have to be the number one person to believe in your zines because once you start believing in your work, other people will too. The zine community needs more BIPOC voices; we have such interesting, beautiful, fun lives, and it needs to be shared with more people.

Breahna can be found on Instagram @brattyxbre_ and TikTok @brattyxbre.

Her online store is brestinyprintshop | Etsy.

Journalism: On Life support and in Critical Conditions