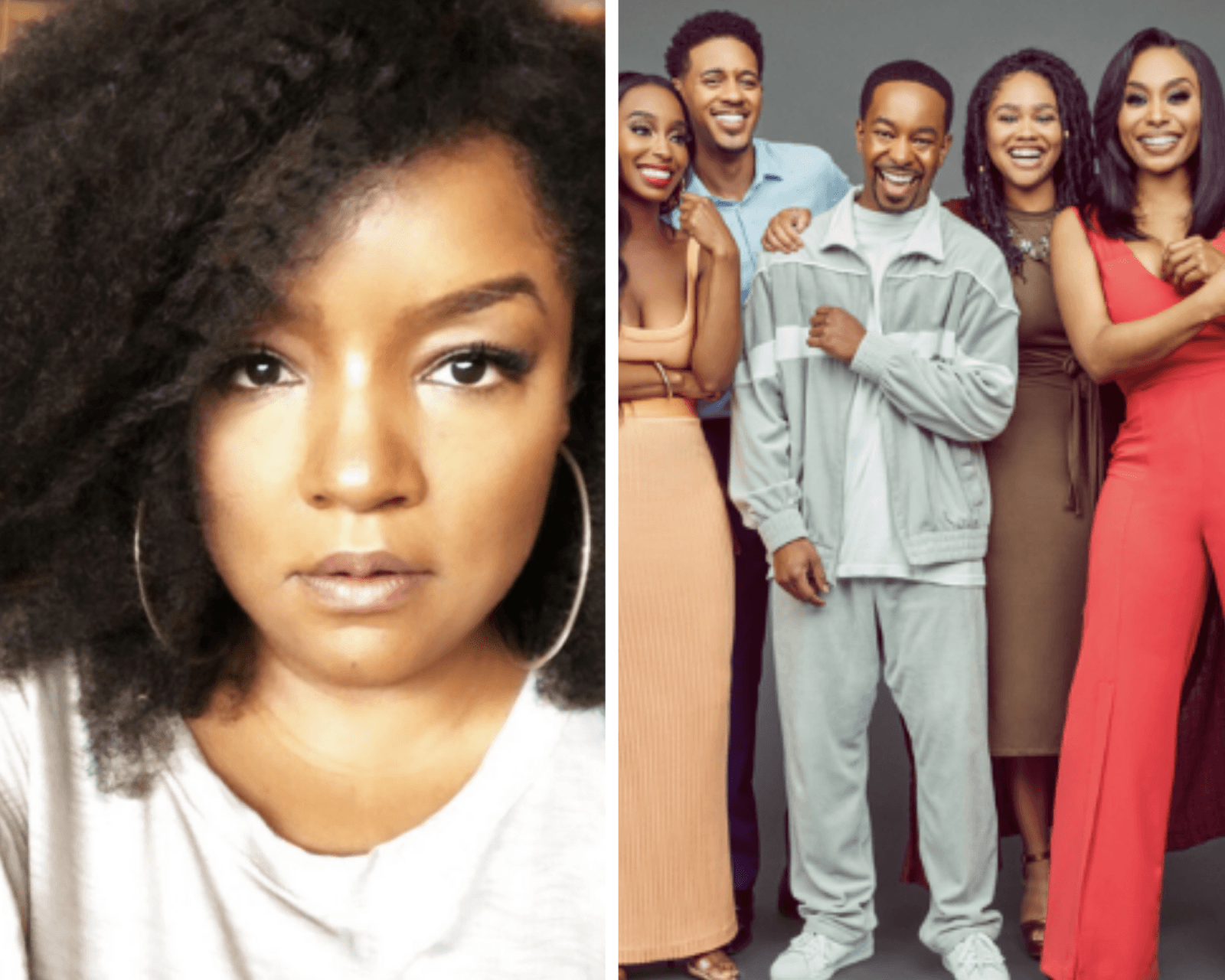 If you’ve been on the hunt for a show that perfectly captures the journey of navigating life as a young Black woman chasing her dreams, look no further. Bigger on BET intertwines comedy and tragedy as five friends navigate life in Atlanta while wondering if there’s something bigger and better for each of them. The creator and writer of the show, Felischa Marye, incorporated experiences from her own life to bring a story to television that many can relate to. The journey for Marye to get to the position she is in now is inspiring as she has overcome noes and not yets, but she is dominating in a field that is largely white and male.

Historically, Black women on TV are written in a monochromatic way. Bigger reimagines how young Black women are portrayed. Why do you think that’s so important?

The least I can do as a Black creator is bring authenticity to storytelling of stories that have Black people. All I can do through it being my life and experience is be authentic.  I got in the game partly because, first off, I love TV and movies, but also because of the monochromatic and singular portrayal of women, and of Black women on top of that. You’re doubling the potential for stereotypes and oversimplification of characters. I wanted to bring authenticity in every way, whether it was how we talk, what we talk about, how we relate to each other, what Black girl friendships look like, what college friendships look like, what co-ed college friendships look like. Because a lot of my core friends are all from my undergrad experience. I wanted to capture that realistically. If you’re real, then you’re not going to portray anybody as one note because you know there is no one note. Black folks are human beings.

Friendship is a huge part of the story. How did you go about thinking up each friendship dynamic and creating conflict?

My own friendships. My friends, throughout my adult life, have been family to me. I didn’t grow up in a big family. I have a half sister; my father had two daughters, and we didn’t grow up together. We’re close now, but we both grew up as only children. That meant for me, I really bonded with girls in my elementary school and in high school and in college. Those are the friends I’ve carried throughout my life.

These characters aren’t literally my friends — they’re like a combination of a bunch of friends from college. Even in this journey to become a writer later in life was supported by and encouraged by my friends. There was never once a naysayer. It was never a question of why are you doing this or anything to lean into any fear that I had about transitioning into a new career and moving to LA and quitting my job and all that. The wrong friends could have put me in the wrong mind set. The premise of the show itself is the idea of dreaming bigger, recalibrating your life, and looking inside of it and asking yourself, “Is this what I want in my life? I wonder is there something bigger, better?” I know on that journey, it’s important to have solid friends behind you, holding you up. As you achieve your dreams, it influences them. We all have certain times in our lives when we’re all making transitions and looking at our lives and inspiring each other to do that thing we’ve always wanted to do that we were too afraid to do. I applied it to the premise of them being in the ambitious city of Atlanta, where everybody is there with a dream. It was a great setting for that kind of story.

Bigger is set in Little Five Points, a neighborhood in Atlanta, Georgia, where important conversations on the culture there are discussed. Why did you think it was important to incorporate topics like gentrification into the story?

I’m always interested in the dynamics and the culture. We have the Black community, but in that, obviously, are subcultures. Within that, there are different classes. Sometimes, I look at this country and see where we’re connected by class versus race. And race is a made up construct — the white powers-that-be gained control over the poor whites by saying, “Hey, you’re on my side; we’re on the same team.” It’s like race is a made up construct; culture isn’t. When you get beyond that, it’s mostly class. A person who grew up in a rural South trailer park is probably more similar to a family of color who doesn’t have a lot of money than they are to rich people of any color.

Given that, we’re always talking about white people and gentrification. I remember me and my friends moving into Bronzeville in Chicago, which is a gentrified neighborhood. In one corner, there might be gang activity, and in another corner might be a million dollar condo. We pretend like it’s a white person problem pushing us out of our neighborhoods, but a lot of times we’re trying to get that lower property value in that up-and-coming neighborhood as professional Black people with money. How are we different? I wanted to explore that. Some of the differences are in the sensitivity, but not with everybody. Because we’re Black, we might be more sensitive to the problems of the Black community, but in a certain way, we want our money to work for us, too. I wanted to explore that and see it from a class standpoint versus a race standpoint, since it’s often a class issue. But it’s complicated.

You have a lot of experience writing in the industry. As you know, the market is overly saturated with men and white people. How have you found your way to flourishing in such a homogeneous space?

The Lord. [Laughs.] God. But outside of being lucky, blessed, and all those words, I used to think that doing this in the latter half of my life and switching careers after spending a whole career almost in PR marketing that it was going to be held against me or that was going to be a deficit. But it actually was helpful, As a writer, I don’t know what I would have written about at 23 right out of undergrad. My point is a career that I didn’t love gave me the story. Bigger has a lot of that. Dion’s struggle in corporate America all came from my life. I wouldn’t have had that story had I not been stuck for years doing the thing I didn’t want to do. Being a little more mature with more story to tell helped me tell a story faster because I had a point of view. I have enough years behind me to know.

I also had a strategy, a plan. I wanted to be repped by the time I left film school, which happened. I actually did get a pilot script commitment deal in film school with HBO. So I think a plan and a strategy behind the plan was essential.

Is there a responsibility you feel to other Black women in the industry to help them work their way up as well?

Absolutely! I am so excited that we were able to cast five talented Black actors with varied experience, but some of them were newer to the game and some of them newer to this big of a role. That was something I never bet on. I never bet on, “Oh my God I can make other people’s dreams come true.” Because when you first start the journey, you’re thinking about your dream. You’re not really thinking that big, but you are getting bigger. When I thought bigger, I was aware that my dream has a lot of dreams attached to it. That was a blessing and a benefit that I hadn’t anticipated. It’s really rewarding, emotionally and spiritually and everything. I also am in Black Women Who Brunch, a group of Black TV writers, which was featured a while back in the Hollywood Reporter about two years ago. Big photo shoot, 62 Black women in it. Networking with Black women, who’ve been where I’ve been in this industry — you always want to pass the torch and you always want to remember that person sitting in another city, trying to figure out how to get to where you are, because I was there and it wasn’t that long ago. I can relate to that feeling.

Streaming services and new ways to bring shows to TV have taken over. Do you feel it’s ever difficult for Bigger to stand out in a sea of options for viewers? What have you learned about making your show stand out?

Yeah, it’s very hard. It’s a very crowded street. How many streaming services are out there? I can’t even name all of them. There are a lot of streamers, and there a lot of options. People are home because of the coronavirus. Streaming is a great opportunity right now, but it’s also hard to break through the clutter. But I am finding that the show, even with the clutter, is breaking through, which tells me a lot about how it’s being received. The comment I hear most is how relatable it is. Relatability does something to an audience member that you can’t pay for. You can’t pay for marketing or anything else to leave a feeling with them. A lot of people tweeted about they can’t put it down, they want to rewatch, binge it three and four times, and that’s because it just feels like my life is heightened or where I want to be or where I’ve been. It’s something that people connect to.

Season 1 of Bigger is available to watch on BET+ streaming service. Fans can look forward to more episodes in the near future, as the writer’s room just wrapped Season 2 a few weeks ago. To keep up with Bigger and all of Marye’s endeavors, follow her on Twitter at @felischa.