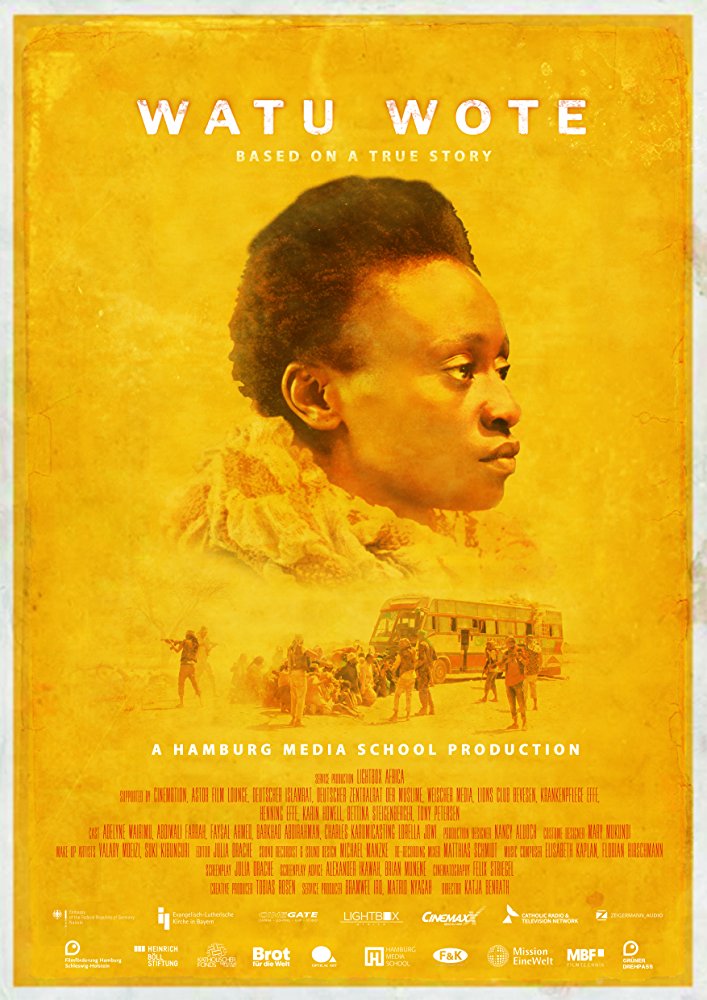 The award-winning short film Watu Wote: All of Us gives audiences a personal look at the events that occurred on December 21st, 2015, when a bus with filled with Kenyan Muslim and Christian passengers was attacked by a group of Al-Shabaab terrorists. Watu Wote: All of Us, directed by Katja Benrath and written by Julia Drache, is a film that shows us the best humanity has to offer; bravery in the face of terror.

It’s early morning, just before daybreak, as a young woman named Jua (Adelyne Wairimu) walks along a street bathed in the incandescent yellow glow of street lights. She sees a small group of men kneeling on the ground surrounded by other men in military camouflage and brandishing machine guns. Suddenly, a teenaged boy manages to break from the group, and as he rushes past her, they briefly look at each other.

Jua makes her way to a small stall and purchases a bus ticket to Mandera. She asks the ticketing agent a question and is assured that there will be a police escort. Eventually the bus, filled with men, women and children, heads out on its 31-hour journey.

The bus is well on its way when Jua awakens from a deep sleep and sees a familiar teen selling bottles of water to passengers. When he offers one to her, Jua rebuffs him and turns away. When the bus stops for a short break in a local market later that day and she buys a bottle of water, one of the passengers, Salah (Abdiwali Farrah, Fishing Without Nets), approaches her, explaining that she should’ve bought the water from the teen, because he uses the money to pay for school.

When Salah tries to engage her in conversation, Jua looks at him in disdain, and says she moved away from Rhamu because “They killed my husband and baby.” When he asks what she means, Jua, her voice filled with hate, spits out “You! You Muslims,” and walks away. Suddenly, it becomes clear that the looks she’s been giving her fellow travelers aren’t out of shyness, but prejudice.

Since 2011, Muslim extremists have been terrorizing Christians as they travel on buses along the border regions of Kenya and Somalia. They force passengers off, command them to recite the Quran and, when they are unable to do so, the passengers are killed. Watu Wote: All of Us is about such an event, but what makes what happened on that Monday in 2015 different is that, before they were made to leave the bus, the female Muslims gave the Christian women and children their hijabs to protect them. Once they were outside, the Muslim passengers declared that everyone was a Muslim, and they would either have to kill everyone or leave them alone.

Watu Wote is a film that sneaks up on your emotions. It starts out quietly, the music is very subtle, and you’re not aware that anything too life-changing is going to happen, until it suddenly does. With the jarring sounds of machine gun fire, the tone changes to one of fear and chaos. As Jua seems almost frozen in fear, there is a palpable sense of dread that builds within the viewer. The attackers shout commands for the Christians to be revealed, Salah tells them that all the people want is to live in peace, and that if they’re going to kill anyone, they’ll have to kill all of them.

As these moments play out, there is no background music, and it’s not needed. There is no need for a score to add tension, the heavy breathing of the passengers does that, the abject terror on Jua’s face is enough. The look of determination that Salah and the Muslim travelers have inspires more emotion that any slow building bass beat could.

In Watu Wote: All of Us, Katja Benrath has succeed at something most seasoned film directors may struggle with: staying on the right side of the very thin line that separates drama from the melodramatic. Katja and her team have created a beautiful film that reminds us that despite whatever religious beliefs we might have, the one thing “all of us” should stand up to is injustice, no matter what form it takes.