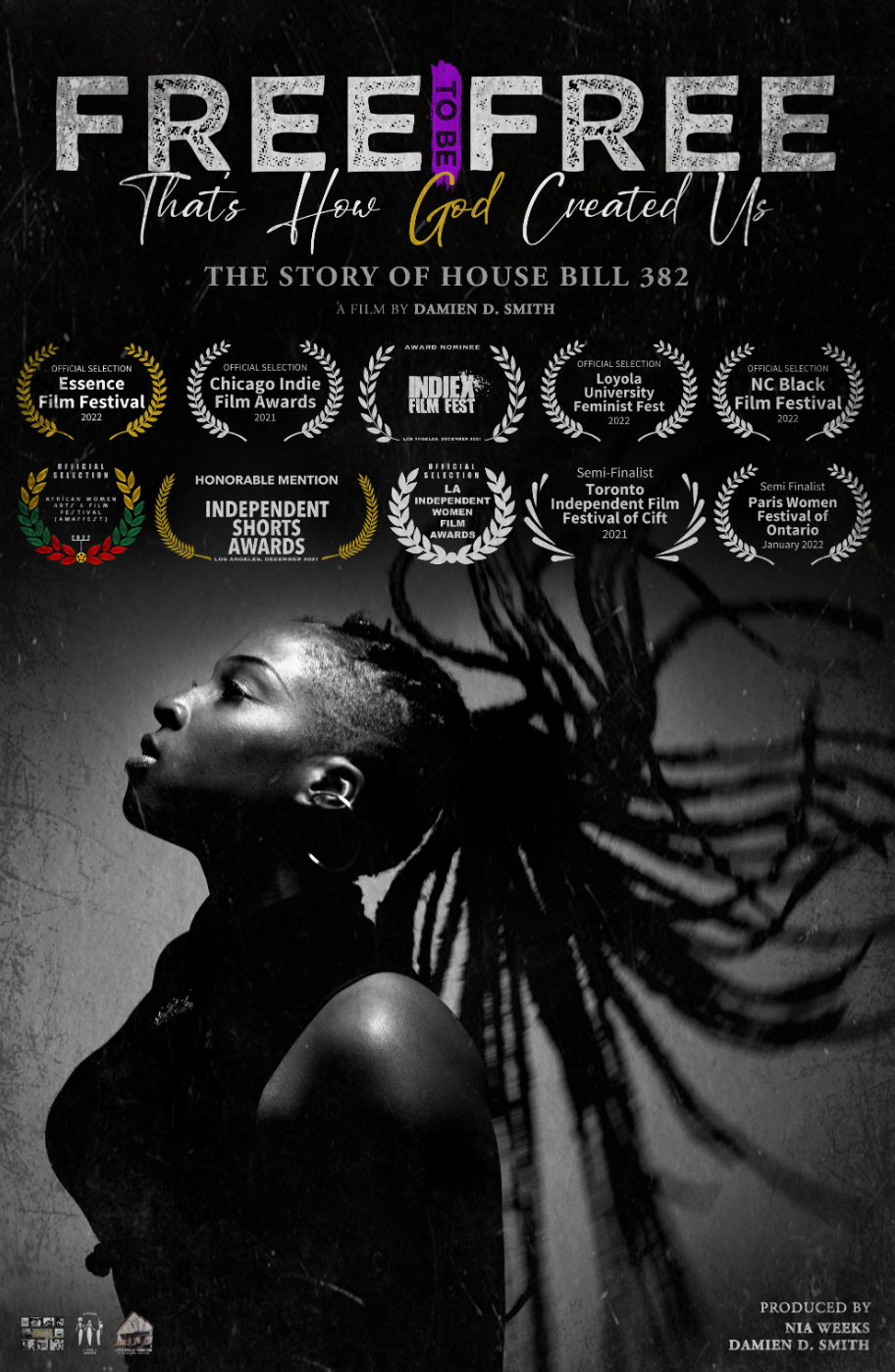 Award-winning actor and filmmaker Damien D. Smith has decided to take an activist approach with his new short documentary Free to be Free: That’s How God Created Us. The filmmaker, notably known for his work with his short film, Daddy’s Big Girl, won the 2018 Filmmaker of the year at Gentleman Jack Reel to Real Short Film Competition. He also is the winner of the Arts with Impact Grand Prize Award for his short About That.

Scrutinizing the plight of women’s issues and how they are marginalized is not new for Smith. His film The V explores the undercurrent of sexual abuse towards women in the sports industry. This has turned into his first feature film titled The V (Victory High), which is currently in pre-production.

Damien spoke with BGN over the phone to discuss his latest project under the production arm 4910 Rosalie Productions, the film Free To Be Free. This film focuses on HB382 — brought by Rep. Candace N. Newell, which addresses discrimination in education, employment, public accommodations, and housing opportunities. While The Crown Act is making waves and partnering with large companies like Dove to bring more visibility to the issue of hair discrimination, it still persists state-wide. Smith uses filmmaking as a tool of awareness and activism in this latest project.

For our readers, please share what Free To Be Free is about.

Free to be Free is a documentary that chronicles the stories, trials, and tribulations women have to go through because of their hair. It’s actually all human beings, but predominantly African-Americans because their hair doesn’t conform to Eurocentric views of beauty or standards of “professionalism.” We chronicle the stories told by a majority of women of all different social statuses. It goes in parallel to trying to get a bill passed in the state of Louisiana. The hope is to put together a policy that protects people based on hair, like The Crown Act.

There are many documentaries about Black women’s hair, but few touch on the work of The Crown Act and the impact it has on regulating Black hair in the workplace. Why was this particular topic important for you?

Hair has been a topic that has been close on my radar for a long time. Because hair is the first thing you notice about physical appearance, it has a lot to do with pride. Representation matters. I saw us doing so much stuff that altered their hair because they felt like they didn’t fit in.

Growing up, I saw the effects it had on the young ladies and young women in my life. So, that’s one part of why I’ve always wanted to address it. My partner Nia Weeks was working with her advocacy on getting the bill passed. We wanted to lobby for this bill. In total, we shot a docuseries that contains three other films. Some of the stories were pulled from there.

While this issue impacts Black women predominantly, you offer a male perspective by making a cameo and interviewing a male subject in the documentary. What was the reason for this artistic choice?

We’re unpacking issues that predominantly affect African-American women and women in general. It does a disservice to a story if we only have one perspective about a subject. I believe that a male perspective or even how you could assist and provide allyship to these stories will be unique because of different experiences. I want to provide a different perspective to help the totality of the story and its impact.

Your film has been selected at many film festivals. What has the feedback been so far from people watching this for the first time?

It’s been very positive. Viewers didn’t know the process of getting these bills passed. Kind of like seeing how the sausage gets made. I tried to do my best. This is why you have to focus on your local elected officials. They make policies that affect your life. These national elections might not trickle down, and you might not even fit in that margin. But these local politicians are the ones that control your fate judiciously or through policies that regulate and change how you are perceived in a workplace.

What advice do you have for budding writers and filmmakers that stare at a blinking cursor or just don’t know how to get started in that first movie?

My advice for people who are just getting started is that first, you have got to get started. Everybody is looking at that blinking cursor. The only difference between the people who got it done and didn’t get it done is the mindset that you’re going to get it done and start. That’s it. Nothing is going to replace the work. Nothing. The more you practice, the more you hone it, the more valuable it is, and nothing is going to replace it. And I’ve picked up that jewel through experience and time. If you continue to work, whatever the highs and the lows are of your situation, you always have that cache of work that you will be known for.

Damien D. Smith is certainly creating a cache of his work through filmmaking and activism with Free to be Free: That’s How God Created Us which will be screening at the Essence Festival. The screening takes place Sunday, July 3, 2022, at 4:30PM.

You can catch Smith performing on-screen on Snowfall (FX networks) and The Purge TV on the USA network.