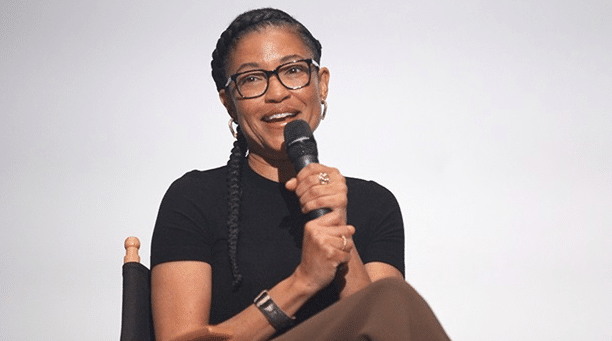 Little is a refreshing new update of the classic 1988 film Big (which starred Tom Hanks).

This time, though, instead of a prepubescent teenage boy transforming into an adult, Little flips the narrative, transforming cutthroat tech mogul Jordan Sanders (Regina Hall) into her awkward younger self, portrayed brilliantly by Marsai Martin (who also happens to be executive producer).

After her transformation and in danger of losing her biggest client, “little” Jordan must rely on her long-suffering assistant April (Issa Rae) to keep her company afloat. Written and directed by Tina Gordon, Little is the visual representation of Black girl magic. I chatted with Gordon and got her take on directing the film, working with its stars, and why representation matters.

Is there any way we can get HomeGirl [the lit Alexa parody in the film] out as a real product? HomeGirl is a vibe, down to the music she played. I need HomeGirl in my life.

It’s so funny because when I thought about HomeGirl, that’s literally what I thought: “I want it.” At first, the idea of HomeGirl was, “If I were in tech, what would I make?” Trying to think of things Regina Hall’s character, Jordan, would make, I thought, “What would I want?” [HomeGirl] knows everything, has access to artificial intelligence, and yet [is a] grounded girlfriend that can just wake me up, get me hype, and get me out the door.

What was great about the music in Little — I’m not the most up-to-date-on-music person — is that Universal had bombarded me with all this music to select for the movie. I didn’t really know the artists in context with the culture. I just would get copies of the lyrics and listen to the music and make sure the vibe was positive, had Girl Power, and had a banging beat. I definitely picked the music based on just the vibe. Then it turned into this coherent soundtrack that people ended up really loving. It make me think, “Should I be a DJ? What have I been doing with my life?”

What got you involved in the project? How did Little come across your desk?

I love Will Packer. We were looking for something to do together. He asked me to take a look at the script, not to direct but to figure out some changes and get it into shape to go into production. When I met Marsai, everything sort of clicked for me about the script and directing it. I just wanted to surround her with strong, comedic, next-generation actresses because I knew she was sharp, smart, and witty enough to be in scenes with someone like Issa. I knew that it would be the buddy comedy that I was looking for. I never thought it would be with a teenager and Issa, but they ended up being the funniest comedic duo. And then Regina — I could not turn down Regina Hall for anything. I think she is the funniest woman on the planet. So, it was a mix of writing and working on the script and realizing that there were actors who were really going to bring their A game, be challenging, and fun — and it just all came together.

Regina Hall, Issa Rae, Marsai Martin: They’re all legends in their own right. What was it like having them work together? What was it like being on a set with a predominantly female cast, women of color at that, and helping them build that dynamic amongst each other?

There’s definitely a “second hand” [partnering aspect] to a Black female lead and a Black female director. We think a lot of the same things are funny, but we can come at comedy four different ways. Regina is very improvisational — not only for herself, but she loves throwing lines out to other characters — creating a very funny, improvisational vibe on set. Marsai is very prepared. She’s the youngest, but she’s the one that I had to worry about the least in terms of wrangling. You get Issa and Regina together, and I look on the schedule and I’m like, “Okay, this is going to be one of those really long days.” I would say everybody’s different. Issa Rae is the perfect person to play an underdog character, like a secretary, like an assistant, like April, because she just has this relatability with her generation. She creates this [character] where you can laugh with her and at her and relate to her at the same time. So, she is the perfect underdog. I couldn’t ask for more from that threesome. 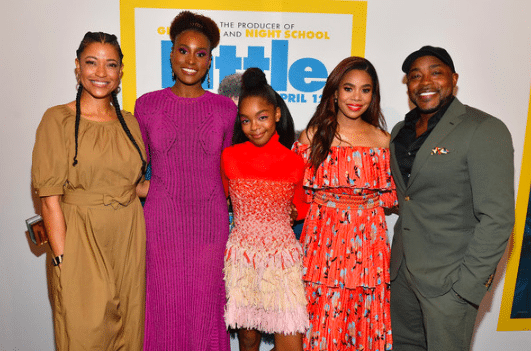 Whether it be women directors or films with strong Black leads, how important is representation in film? At the American Black Film Festival, Marsai said as an executive producer, she made it a point to have big natural hair in the film. Can you elaborate on why representation is so important and why this movie is so important to young Black women?

Well, I think it’s the second hand you have with all the departments that understand the culture. If you’re making a movie about a Black girl who might be bullied, there’s a shorthand that happens. I can ask Marsai Martin’s mom and say, “I need a big afro. I want it to be really big.” I’m considering everything. I don’t want Marsai to have to sit in hair and makeup. I don’t want her to have to use her own hair. So, how are we figuring this out? When you go to a Black woman, you have resources, [she] understands; you don’t have to pull up photos, you don’t have to discuss the importance of hair and Black women. She [Marsai’s mother], says, “I know just the person. She’s an amazing wig maker. I’m going to get you guys on a phone call.” We get on a phone call, and her name is Dionne and she could make the afro of my dreams.

If it’s someone who doesn’t have that background, you have to do a lot more explaining and going back and forth. When you have a diverse crew, that draws on different experiences, different details. That means something to the culture that you’re speaking from. It’s about that authenticity that resonates with the audience. That was a perfect example because that afro became its own character. It became its own thing. That was Dionne’s first movie, and she is now in the film industry, doing big movies, and doing big wigs for big actors and actresses. People talk about directing, that’s true, but we need to start breaking in and exposing the culture to all kinds of jobs: art directors, production designers, costume designers. There’s so many professions within filmmaking that don’t get highlighted. So, we’re not getting in that lane. I’m just saying more attention should be put on not just directing, but all the departments.

I love the message of the film: Jordan had become successful by becoming a different person and stepping on people along the way, basically becoming a bully. She doesn’t realize until her transformation that you can be just as successful by lifting others up. Can you elaborate more on that?

I think, even the message of why we all came together to support Marsai, that was an important message for me in writing the script. The message of the movie sort of happened in reverse, where I realized that so many women were coming around the project to push Marsai forward, to support her vision. The making of the movie mirrored the message of the movie, in which Issa’s character and Regina’s character go from being adversaries to really supporting each other, and moving their company forward, because they joined together. I think everyone is different. Everybody brings a different energy to projects together. Encouraging collaboration between women, encouraging working between women, is a message that I stand by. That was definitely the message of the movie. I felt like Regina’s character, big Jordan, changed but she stayed true to her personality. Issa’s character does the same thing. She grew, but she stayed true to her personality. You can’t replace either one in the workplace. Together, they moved the company forward. So, that’s my motto.

If you couldn’t get enough of HomeGirl and her dope playlists or pint-sized Jordan terrorizing everyone in her path, Little is currently available on digital. You can also bring the Little Blu-Ray/DVD combo pack home on July 9th.