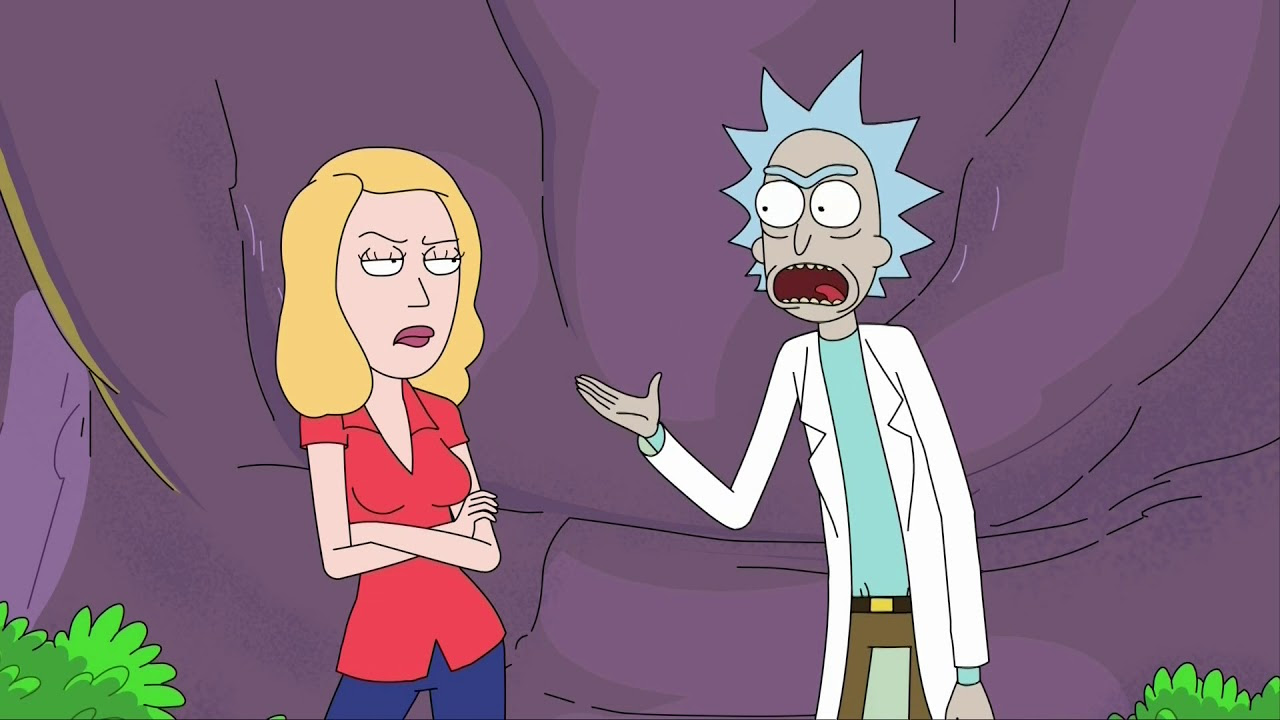 We finally get a “Rick and Beth” episode of Rick and Morty and it is FIRE. Yassss. Considering she’s much darker (and more capable) than Summer is, I’ve always wondered why if Rick was going to start expanding his little adventure squad he wouldn’t go with Beth instead of Summer.

It starts off with Beth, Morty, and Summer watching TV in the living room. There’s a news update about a cannibal murderer getting executed after spending years in prison — it’s the father of one of Beth’s childhood friends, and the murder was of the friend himself, Tommy, when they were kids. Beth reflects on how as a child she rationalized the death of her friend by believing he got lost in her childhood imaginary world called “Froopy Land.” Hearing this, Rick sends Morty and Summer off to spend time with Jerry, and when he and Beth are alone he tells her that Froopy Land was real. This means Tommy WAS left behind in Froopy Land, which leads Beth to believe he might still be alive, so she makes Rick take her there so they can find him.

They search the neon Lisa Frank-esque world of Froopy Land, Beth furious with the realization that Rick would rather create a Play-Pen dimension to stick her in instead of spend time with her. Then, Rick’s attacked by a giant bird with actual claws, which shouldn’t exist in this world as Rick had designed the animals to be as harmless as possible. They come to the conclusion that Tommy had survived by having sex with the native animals of Froopy Land and eating their offspring to survive, therefore becoming some sort of king in this land.

Meanwhile, Morty and Summer are having a terrible time with Jerry, as he’s started dating an alien warrior named Kiara who’s declared herself “soul-bonded” with him, a level of commitment Jerry’s not ready for but doesn’t know how to get out of, and when he asks his kids to help him out of this situation they refuse. Summer nails it right on the head when she says “you’re a closet racist, a beta male sexist, and you drag everyone into a horrible situation by only thinking of yourself.” Absolute truth. He does end up breaking up with Kiara but by telling her it’s ’cause the kids hate her, which makes Kiara try to kill Summer and Morty. But Jerry finally mans up and admits the truth.

Side note: when the hell did Jerry become such a waste of space? He was always vaguely annoying but still a sympathetic character, especially with having Rick as a father in law. But this season, he’s been nothing short of a cowardly dick. And people have been calling him out on it, which is great, but also its like, why’s his character going in that direction to begin with?

Rick and Beth are led to Tommy, who doesn’t recognize either of them and has his animals enact a play of what happened to him years ago, saying he was only trapped in there because “Tiny Beth” knocked him into a honey swamp and left him there because she was jealous of his family. He also shows them how he humps the animals and eats the hybrid children, which disgusts Rick enough to grab Beth and portals their asses out of there. Beth wants to go back and save him, Rick doesn’t feel up to it, she says its Rick’s fault that Tommy’s left in there.  Rick lets off a bombshell — all interdimensional Ricks create Froopy Lands for their Beths, because all their Beths are terrifying, his included. She terrorized the neighborhood as a child and he created this land to distract her because it was easier than dealing with the alternative. He tells her she’s just like him.

In an effort to disprove him, she goes back to Froopy Land and tells Tommy who she really is and tries to get him to back to the real world, to prove to everyone he’s still alive and his father won’t be executed. He refuses because she won’t admit that she did push him into the honey swamp. She realizes she is more like Rick than she cares to admit, and when Tommy tells his army to attack her she easily begins to slaughter them.

Eventually, she comes home alone — she couldn’t get Tommy to come home with her, as she tells Rick. But she does have one of his thumbs and asks Rick to create a Tommy clone to help free Tommy’s dad, which they do together. They have a nice bonding moment while doing so, and Rick says if she wants to, he can create a clone of her to take care of the family while she goes out into the world and lets loose like Rick has done his whole life.

Does she take the offer and go full Eat Pray Love? The episode ends on an ambiguous note so we don’t get to find out. I hope she doesn’t because watching them banter this episode was truly refreshing and I want to see more of it. She’s more his equal than anyone has ever been on this show, and having someone like that to counter him is what’s really keeping him from turning into a Mary Sue. Morty and Summer fight him sometimes, but they’re kids, and it’s always clear Rick’s in charge. But with Beth, there’s a nice dynamic change, and I want this show to keep it coming!