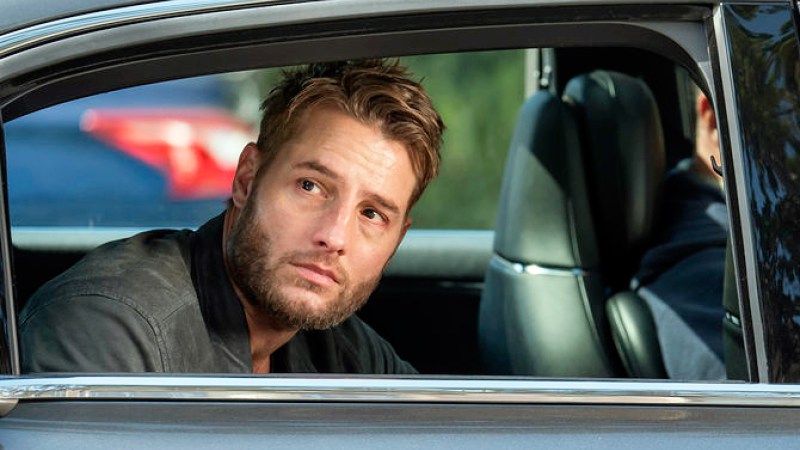 On this week’s episode of This is Us, present day Kevin goes back to Pittsburgh to be honored at his high school’s homecoming.  While in flashback, we experience the days leading up to his career-ending high school football injury.

The episode opens in flashback with Jack and Rebecca encouraging the Big Three to walk.  Kevin, who was first to be born, is also first on his feet.  This explains why Jack refers to him as his “Number One” (also the episode title) and later why he plays number one on his high school football team.  Later, we speed up a bit to high school as the Big Three prepare college applications.  Kevin, who is waiting to hear back from his top choice, Notre Dame, receives a full football scholarship to the University of Pittsburgh.  Jack and Rebecca scramble to prepare for a visit from the coach of Pitt as an obviously disinterested Kevin can’t be bothered.  He is rude to the coach and after the coach leaves, he is confronted by Jack who is disappointed in his behavior.  In a true dad way, Jack tells him to get out of his sight and then demands he return so he can yell at him.  Through a series of snarky comments, we learn Kevin feels some kind of way about Jack’s struggle with alcoholism.  He hints at being embarrassed by Jack’s vulnerability.  While Jack takes Randall to a college visit out of town, Kevin plays in the game that will ultimately be his last because he is catastrophically injured during the game.  After learning his injury will prevent him from playing again, Jack gives Kevin the chain around his neck that holds the Buddhist symbol for purpose.  The chain, he says, was given to him by someone who met a great deal and got him through tough times.  Through tears, he tells his son, “You will find your purpose.”

The present day portion of the episode opens with Kevin in a hotel room with heavy bags under his eyes popping pain medications like candy and washing it down with a steady stream of alcohol.  He looks bad and smells too, according to the hotel maid Martina.  Despite this, he agrees to attend his high school’s homecoming.

In the episode’s first tear-inducing moment, Kevin visits his childhood home imagining he and his siblings playing football in the front yard with his parents.  When he arrives at his high school, he stumbles around having flashbacks of Sophie and his glory days.  While waiting to give his speech to the student body, he sees his former classmate, now cosmetic surgeon, Charlotte, who almost immediately confesses to having the hugest crush on him in high school.  Thirsty Charlotte continues to shamelessly flirt with him throughout the night.  Kevin is surprised when his former football coach, The Duff, comes back to award him with his honor.  Kevin stands off stage imagining his father giving the heartfelt introduction and grows emotional as he walks on stage to embrace his coach.  Feeling overwhelmed, he tells the crowd he doesn’t deserve the award.  When they applaud and cheer in adoration anyway, he tries to stop them and in a heartbreaking moment, stares off into the crowd and says, “Don’t love me.”  Despite this, they continue to praise him for his “amazing” speech.

After the ceremony, Thirsty Charlotte asks disoriented Kevin to go for a walk.  As the two sit outside the school, Kevin confides in her that he feels like he could be standing completely naked and all anyone would ever see is him in his high school football jersey.  Charlotte, true to her thirst, and clearly only hearing the word “naked,” reaches out to touch his thigh and tells him that’s not all she would see.  Kevin is all of us as he stares at her disbelief and walks away. With a bottle of beer in hand, Kevin walks out on his high school football field reliving his high school injury and a series of life-shattering heartbreaks that followed from the death his father to losing Sophie. As he sits on the field feeling the weight of the moment, Kelly, the student homecoming coordinator, asks him is he wants to party.  Rather than sinking to a new low with the underage teen, he goes with Thirsty Charlotte back to her place and makes all of her teenage dreams come true (which she doesn’t hesitate to tell him).

After the deed is done, Kevin convinces Charlotte to make him a snack while he steals a page from her prescription pad to get himself more pain medication.  When he finds it, he leaves without saying goodbye and heads to the pharmacy only to realize he is no longer wearing his father’s necklace.  He returns to Charlotte’s house and, enraged that he left, she refuses to let him in to search for the necklace.  He pleads with her that it is the only thing he has left of his father and she slams her window leaving him on her grass admitting he is pain and he needs help.  Justin Hartley blew the lid off his performance, giving me goosebumps and he dissolved into tears on Charlotte’s lawn.  I cried with Kevin, ya’ll.  Someone needs to give that man a raise and all of the awards.

This episode made a subtle yet powerful commentary on how disconnected we can be to celebrities, even when they are in visible pain. From onlookers at the airport when Kevin landed in Pittsburgh to Thirsty Charlotte (who is a doctor) to all of the eager students and teachers at the ceremony, they all seem to have placed Kevin so high up on a pedestal, they forgot he was a human being.  They ignore his pain in favor of their own ideas on who he is and who they want him to be.  While I didn’t leave this episode thinking Kevin was any less of an asshole, revealing the depth of his pain made him much more sympathetic.  It also made him somewhat redeemable.  For that reason, I really, really wanted him to be okay. I found myself desperately wanting Kate or Randall show up.  So, when Kevin arrives at Randall’s house at the end clearly ready to ask his brother for help, I felt relieved. Of course, that relief was short-lived when, in the episode’s most shocking moment, Randall assumes Kevin is there for another reason: Kate lost the baby.  Yeah. I think I audibly made the “oof” sound as the news hit me like a sucker punch to the gut.

Next week, in what is sure to be another tear-jerker, This is Us will focus on Kate and her and Toby’s painful loss in the second of this three part episode trilogy, “Number Two.”