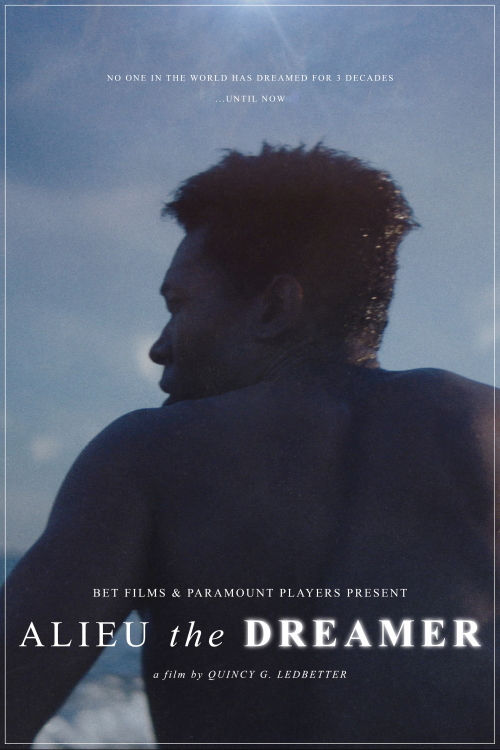 Today, BET and Paramount Players announce the premiere date for the winning movie script of BET’s nationwide competition ‘Project CRE8.’ This once-in-a-lifetime contest gave an undiscovered filmmaker the opportunity to have their feature film script produced with a million-dollar budget.

Written, directed, and composed by Quincy Ledbetter, “Alieu the Dreamer,” starring Denzel Whitaker (Black Panther, The Great Debaters, Training Day) and Haley Webb (The Final Destination, Blonde), takes place in a world where mankind hasn’t dreamed for three decades, until a driven government agent discovers a young man in the projects, who has suddenly started dreaming.

Sought after by an alluring leader of a religious cult, Reverend Venus, played by Rick Hearst (The Vampire Diaries, Dynasty, General Hospital), Alieu struggles to understand his newfound ability while fighting to care for his family.

Alieu is an intelligent, hard-working and principled young man, who is backed into a corner. Desperately trying to make a living as a dishwasher to support his girlfriend Fatima and their baby daughter Jamila, Alieu is overwhelmed by his gift, and the power that comes with it.

Maya is passionate, driven and fearless. Just a child when the world experienced the sleep disruption, Maya now works for the Department of Health and Human Services, searching for anyone who can still dream.

Reverend Sean Venus is the charismatic, intelligent and manipulative leader of a massively popular cult, determined to use Alieu’s gift to expand his own influence and power.

In 2018, BET and Paramount Players held a screenplay contest, “PROJECT CRE8” that gave one aspiring, undiscovered talent the once-in-a-lifetime opportunity to have their screenplay produced into a feature film with a million-dollar budget. The contest culminated at the BET Networks Headquarters in Los Angeles, CA last September where five finalists pitched their films to a panel of television and film executives. Ledbetter’s original script, Alieu the Dreamer rose to the top of the heap and was selected as the winning script. BET purchased Ledbetter’s screenplay and worked with him and Paramount Players to turn his original script into a feature film.  This year ‘Project CRE8’ launched its annual contest in partnership with Tracy Yvonne Productions, searching for TV comedy’s next big screenwriter.

Alieu the Dreamer will premiere Thursday, October 22 at 10 PM ET/PT on BET.