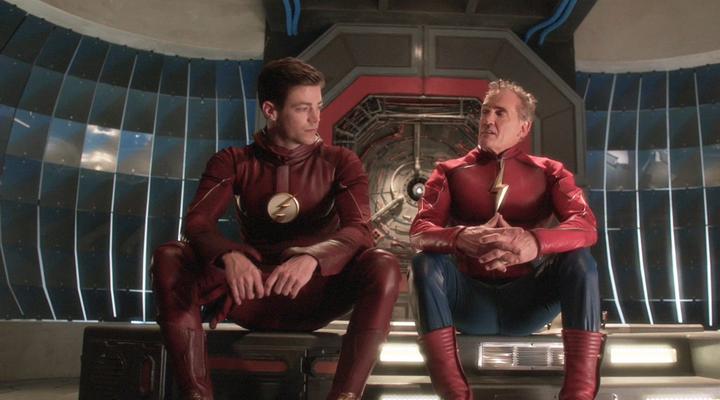 About that MidSeason Finale… let’s discuss before this week’s all new episode.

After watching episode eight of The Flash during the CW’s epic DC crossover week, I wasn’t sure what to expect with the midseason finale. Season 3 of The Flash, at least for me, has been a rollercoaster ride, with episodes wavering between silly, mediocre, and good. It’s sad that after having such a fun episode during the “Invasion!” crossovers, the midseason finale titled “The Present,” failed to deliver due to pacing issues, narrative predictability, poor character development, and rushed story arcs. Though there were some fun moments, like watching old head Jay Garrick battle the Trickster, or Barry being sweet to Iris West during some cozy Christmas scenes (things are getting serious!), the gist of the episode (the baddie Savitar) fell flat. Anyway, here are some highlights from the episode along with some of my grievances. 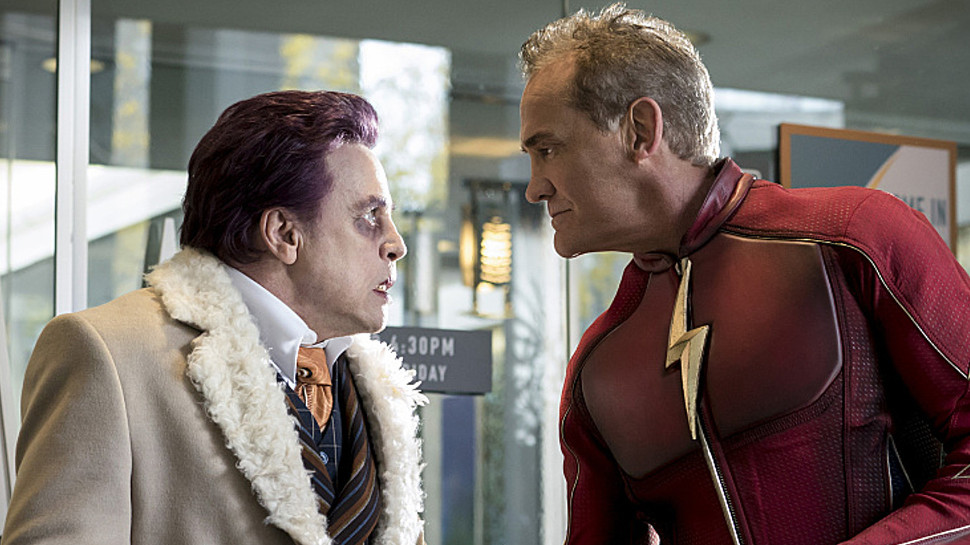 Julian as Draco Malfoy and Indiana Jones: Julian Albert decided to shed his CSI cloak this week and don his Draco Malfoy/Indiana Jones cape for the midseason finale. He was predictably grumpy and nasty to Barry Allen, spitting out Barry’s name just as angrily as Malfoy does Harry Potter’s. And if that wasn’t sufficiently over the top, Julian’s backstory proved to be very Indiana Jones inspired. Indy hat and all, Julian apparently led an expedition to the Indus Valley to recover the Philosopher Stone, an artifact that he believed would return his sister from the dead. Instead, the stone turned him into his alter ego, Alchemy, a fact that he is unaware of due to him blacking out whenever Alchemy is in control.

The stone box that housed the Philosopher Stone not only turned Julian into a supervillain, it released Savitar onto Earth 1. Team Flash discovers this fact while researching the stone, and after confronting a confused Julian, they determine that he is unaware of his previous devious actions. To gain Julian’s trust (Julian believes Flash is trying to frame him by saying he is Alchemy), Barry reveals his identity as the Flash. The reveal works and Barry eventually convinces Julian to help them communicate with the God of Speed, who by this point is imprisoned in the stone box along with the Philosopher Stone.

In order to communicate with Savitar, Julian is hooked up to one of Cisco’s “science” machines, allowing for his mind to be synced with the stone box. Once synced, Savitar speaks through Julian and informs Barry that he’s pissed at Future Barry and has traveled to the present to exact his revenge. He also boasts about knowing the fates of everyone on Team Flash, and prophesizes its downfall. Once Savitar’s message is delivered to the team, Julian is disconnected from Cisco’s machine and becomes an honorary member of Team Flash.

My grievance with the Julian character is that he reads as Draco Malfoy. It was cute at the beginning of the season, but this isn’t Harry Potter. I wish that there was more to the character than just anger and a biting British accent. Sure, he reveals that he had a sister who is now deceased. Sure, he talks about how wealthy his family is. And yes, he loves to remind Barry how much he dislikes him. But that’s it and that’s just not enough, in my opinion, to be trusted with the secrets of the scarlet speedster. I hope that there’s more to Julian in the next half of the season, because he sorely needs better character development.

Genie in a Bottle: The biggest let down in the episode was the back story for the God of Speed, Savitar.  The chrome covered baddie was revealed to be the first speedster ever created. His beef with Barry Allen takes place in the future and likely is a result of the dreaded Flash Point timeline. It’s also revealed during the episode that Savitar was reintroduced to the world by Julian during an Indiana Jones-ish expedition to the Indus Valley. Apparently, prior to working as a CSI, Julian had visions of his dead sister asking him to search for the Philosopher Stone, which she insisted could raise her from the dead. Of course, it was a trick executed by Savitar to free himself from his genie-like prison; the Philosopher Stone’s stone box. Once out, he began controlling Julian, who as Alchemy began resurrecting the meta-human powers of Flashpoint victims. And…that’s it in terms of Savitar’s background. There’s no explanation of why he needs Flash Point metahumans. There’s no explanation of why he was trapped in the stone box or why he’s so mad at Future Barry. There’s no explanation on why Savitar doesn’t outright murder Barry, because he’s obviously powerful enough to do so. There’s just not enough time spent during the episode flushing out the Savitar character, which resulted in him being boring.

The mystery surrounding Savitar wouldn’t be so bad if he hadn’t been so easily defeated by Barry. Yep, the Speed God was trapped in his little stone box like a genie and then tossed into the Speed Force by Barry with the help of Jay Garrick. Easy. The only interesting thing about Savitar’s defeat was that Barry was accidently flung into the future while traversing the Speed Force and witnessed the death of his beloved Iris West.

Iris West Must Die…Maybe: Iris West, the most underused character in the series, spent most of the season being Barry’s cheerleader, fussing at her brother Wally, and wearing cute dresses with matching lipstick. Ugh. I’ve been waiting for something to happen with her character this whole season, but it seems she’s only good for chaste kisses, motivational Barry talks, and dying. You heard that right. Iris West might die in the future, a fact witnessed by Barry when he’s hurled into the future while trying to get rid of Savitar. The death scene is brutal, with Iris being impaled by one of Savitar’s Wolverine-like claws and future Barry screaming in horror as present Barry watches confused and shaken. Before present Barry can do something very Barry-ish (like interfere, change the future, change the past), the wise Jay Garrick snatches him back into the present and explains to him that there are many possible futures, all of which are dependent on the choices that Barry makes. Barry, though visibly shaken, still has a glint in his eye suggesting that thoughts like, “I might f@ck with the timeline at some point,” might be swimming around in his head. Thankfully, he listens to his friend and mentor, Jay, and instead of twiddling with the timeline, he leases an apartment for he and Iris and professes his love to her, thus concluding the midseason finale.

What did you think of the midseason finale? Feel free to comment below, and remember, The Flash returns January 24.