The summer is here: school is out for many, the pungent aroma of burgers, chicken, bratwurst, and barbecue ribs (or, portabella mushrooms, corn on the cob, and vegetable skewers) rise from grills in the neighborhoods or out at the park.  As you try to unplug from the day, sit with your kids, or watch them cautiously at the pool, BGN presents a few options like the new card game, Fluxx, from Looney Labs.

The creators of Fluxx are NASA engineers and the original game was released in the late ’90s. There are several versions, and I would sound like Bubba (from Forest Gump) listing all the different ways to prepare shrimp if I went over them all. However, Chemistry Fluxx and Math Fluxx have an actual educational component and still feed the fun nerd meter.

I was introduced to Fluxx at my routine Games-at-Lunch Friday session at work with co-workers who enjoy playing various board games. I will be upfront and admit that my first game was not nerd themed but Holiday Fluxx. However, these STEM-themed offerings were a blast among my work nerd counterparts, so I thought I would put them forward. 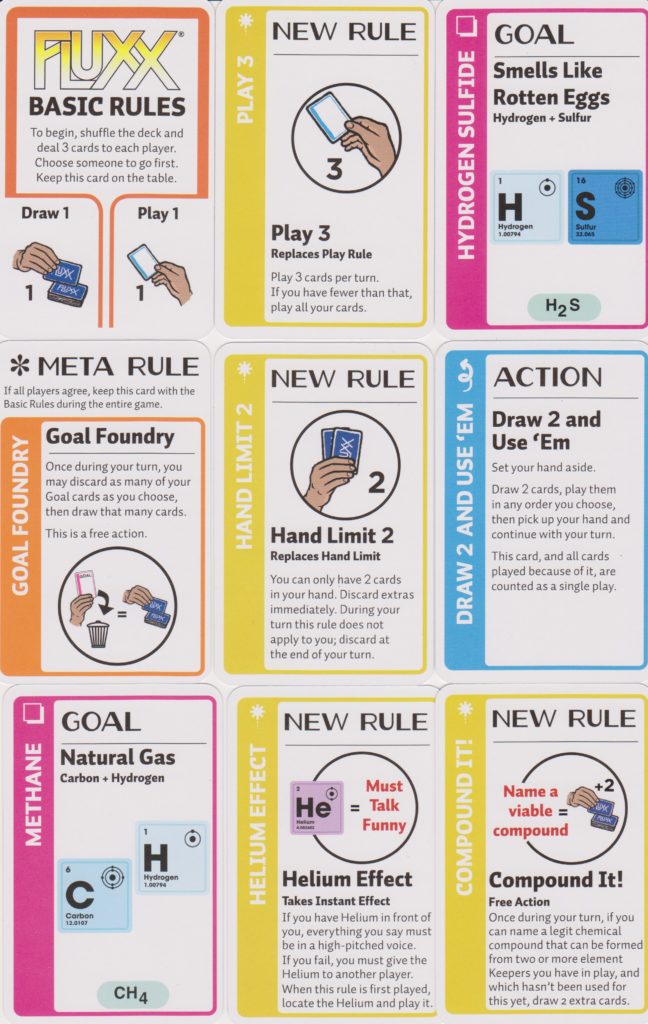 The gameplay for Fluxx, in general, is interesting as the rules can change with each player’s turn.  The length of the game varies each time.  I‘ve had games go from two minutes to about fifteen. The types of cards can vary depending on the theme, but there seem to be four basic types of cards: goals, actions, rules, and the keepers. The goal card allows the replacement and sometimes addition of the goal. The action card (go figure) directs an action.  The rule card typically falls into two categories — either a draw or play rule.  There can and will be many rules on the table (Note: A rule is only discarded if it contradicts an existing rule or an action card allows its removal). Last but not least, is the keeper cards, which are collected to support achieving the goal and is how the game is won. 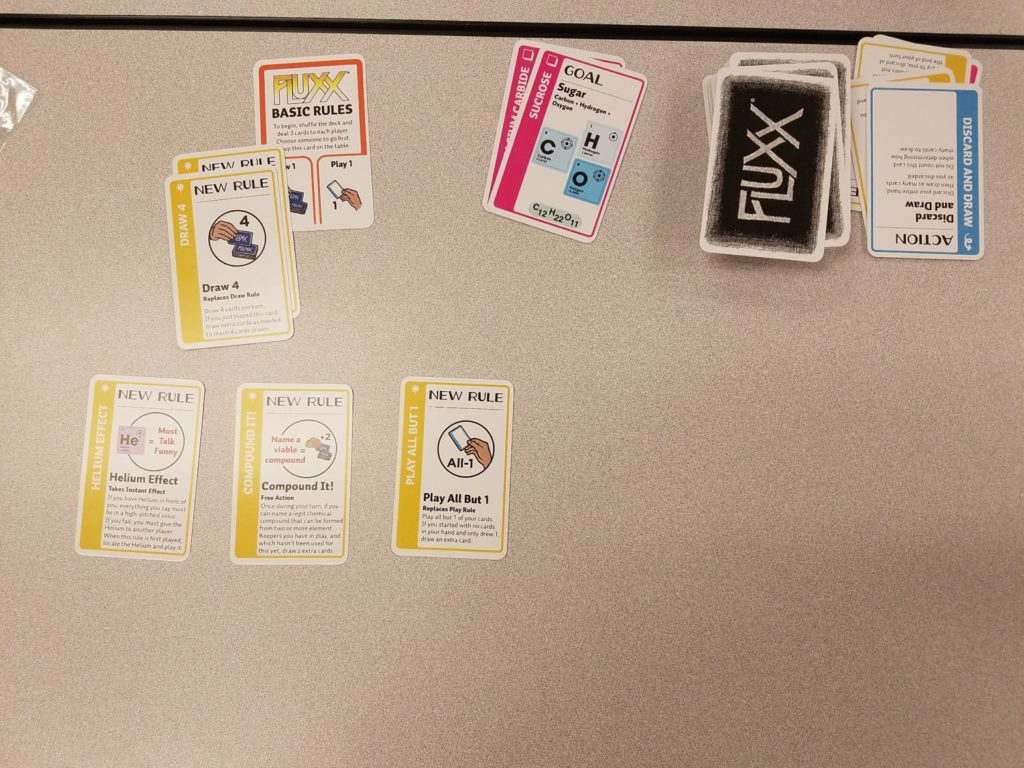 Gameplay starts with placing the basic rule card in the middle, shuffling the deck, and the dealer giving three cards to each player face down.  The deck will be placed in the middle of the table and as the game progresses there will be a discard pile.  The basic rules for the game start with two types of rules: the draw and play rules (draw one, play one).  The game progresses with each person playing their hand consistent with the basic rules in a clockwise direction. The goal is typically established in the first round, and the rules get more complicated as the game progresses.  Anyone can join the game while it’s in progress, simply by taking three cards off the deck and following the rules of the session upon their turn.

The twist for the theme of the game is the actions and keeper cards.  In Chemistry Fluxx, the elements and associated lab gear are the keeper cards, with different compounds (combinations of different elements).  At the store where I purchased the game, other non-educational-themed versions seemed to be selling better, but I would not disregard this theme because it says chemistry. I too have flashbacks of the terrifying lighting of the Bunsen burner for the first time and fearing I would set my eyebrows on fire. However, I also destroyed enough beakers in the lab doing “experiments” of my own to feel my lab fees were well spent. Long story short, your lack of remembering how to balance a basic chemical equation will not make you less competitive, however, remembering salt is sodium chloride (NaCl) could score you an extra two-card draw though. Also, the Helium Rule is fun as it requires the person with the He(lium) keeper card to speak in a high-pitched voice. My peers also added to the fun by arranging the elements into different words, and the card concerning hydrogen sulfide entitled smelling like rotten eggs and the natural gas card (Methane) did lead to a discussion about flatulence (she who smelt it dealt it!!!). I believe Chemistry Fluxx could benefit from a fun multiplier with some house rules and alcohol, but make good choices.

For Math Fluxx, your inability to remember factorials (3! = 3*2*1=6) or factor a polynomial equation [x2-2x+1 = 0; (x-1)2= 0] will not prevent a rousing game.  In Math Fluxx, the goal is generally either a two or a three digit number. The keeper cards go through ten and the rules can really add some interesting tweaks. One of them is the binary rule, which means your set of keeper cards can only have zeros, ones, and/or the ten card. There are other goal cards with clever references, such as the ultimate answer to the universe, -42. There is also another “clever” inference with the 69 or the “Ying Yang” goal card. While fun, my nerd meter was not quite as filled with this one, although I believe the “metarules” do add to the complexity.  You could also consider this one to be slightly educational with elementary to middle school competitors but not enough to dampen to fun for adults as the “metarules” can require the goal to be achieved by adding, subtracting, or multiplying your keeper cards.

Either way, I offer both of these up as a good option for summer vacation fun, gatherings with friends, and the obligatory family reunion.  If you’re looking for Fluxx, check out your local hobby or comic book/game store.